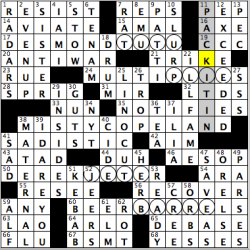 Good day everybody! Here is hoping all of you are doing well today as we speed into autumn!

Today’s puzzle is a tribute to someone who, as I found out doing the grid, was born just four days before yours truly. Four of the theme entries have circles within them, and the letters contained in them eventually form a word that also is an integral element in ballet. The reveal, located smack dab in the middle, is the captivating performer MISTY COPELAND, who is celebrating her birthday today (38A: [Born on 9/10/1982, she is the first African-American female principal dancer of the American Ballet Theatre]).

Loved the long-ish, non-themed fill in the grid that was featured, including I DARE YOU (39D: [“Go ahead, make my day”]) and PACK IT IN (11D: [Give up]). When reading the clue to OR ELSE, I initially thought about a word along the lines of a truce or a pact for some reason (48D: [End of a threat]). Maybe seeing ANTI-WAR colored my thinking for a quick second (20A: [Fighting against fighting, say]). Once again, the time during summer just flies and, before not, it will be FLU season once again (66A: [Winter ailment]). Here is hoping that you have at least one more fun outing for the end of the summer and/or have already had a good summer to look back on with glee. The unofficial end of my summer comes when the US Open tennis tournament ends, and this year’s edition ending this past Sunday made me really SAD (41D: [Feeling really blue]). Outside of trying to unsee RESEE (55A: [View anew]) and CCC (19A: [300, to Cato]), this grid had a lot of PEP (11A: [Zing]). Ya see?!?

“Sports will make you smarter” moment of the day: NUN (33A: [Bergman’s role in “The Bells of St. Mary’s”]) – Sister Rose Marie of the Queen of Angels, a cloistered NUN at the Poor Clares monastery that is located in Alexandria, Va., was once Shelly Pennefather, the 1987 Wade Trophy winner as women’s college basketball’s player of the year and a three-time All-America while at Villanova University. (She still holds the school’s all-time scoring record for all genders.)  After a three-year professional career in Japan once her senior season at Villanova ended, Pennefather decided to forego her professional basketball career (and a $200K/year salary) to retire to a monastic life. Per her religious vows, Pennefather, who officially became Sister Rose Marie of the Queen of Angels in 1994, was not allowed physical contact with family or friends after her commitment to the cloistered life for a period of 25 years.

On June 9, 2019, the 25-year anniversary of her initial commitment to the Poor Clares order, Sister Rose Marie of the Queen of Angels (née Pennefather) made her first contact with family and friends, including her 78-year-old mother, Mary, and current Villanova women’s basketball coach Harry Perretta (who coached her while at Villanova) in a quarter century. The following short video sums up this story pretty well, with some very powerful images to boot…

In efforts to diversify CrossWorld, established constructors are stepping up in really cool, important ways. Take Ross Trudeau, who has posted the following on each of the XWord Info writeups of his recent NYT puzzles:

“Also, if you’re looking to get into crossword constructing, and especially if you identify as non-male and/or LGBT and/or POC, I’d be thrilled to offer whatever assistance I can to help you get your puzzles published. Contact me via Instagram (@rosstrudeau) or Twitter (@trudeauross).”

It looks like today’s fun Tuesday puzzle might be the result of one of those collaborations [edited to add: Ross confirms that it is!] – I hope to see more in the future! 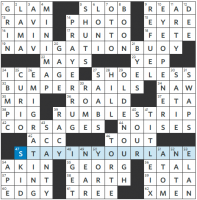 I love taking a fun, modern phrase like the revealer and re-purposing it in another way like the constructing pair have today. Each of the theme entries feels fresh and in the language. I’ve certainly benefited from all but the first one! A nice early week theme that didn’t feel boring or duplicative.

Other random thoughts:
– Not many women represented in the grid today – EYRE, LONI Anderson, Ruby DEE – but bonus points for a woman constructor on the puzzle and for featuring TITLE IX prominently in the grid!
– There was a lot of fun fill in this grid, including GLAM, EYE OPENERS, MINIMAP, PRAYER RUG (nice representation!), and OLD ENOUGH. I don’t recall seeing many of these in puzzles, which also helped make the solve feel fresh and interesting.

But yes, if you’d love to get into constructing crosswords, get in touch with Ross Trudeau! I’d also be happy to direct you to kick ass mentors – find me on Twitter at @naytnaytnayt. 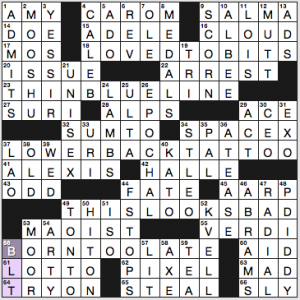 The rationale for this theme doesn’t make sense to me. Why would you be scrambling up the letters in a BLT sandwich? Nobody’s ordering an LTB sandwich. And selecting phrases whose initials happen to be those scrambled trigrams, well, these phrases aren’t commonly known by their initials, unlike the sandwich. We’ve got:

Fave fill: Yiddish KVELL, SPACEX (that’s styled as SpaceX outside of crosswords). Not keen on: SUM TO crossing URI, neither feeling quite familiar enough for a Tuesday; HIT ON crossing TRY ON.

3.25 stars from me. I’d have liked a stronger reason for the theme to have taken form.

If you didn’t read the title, you missed the revealer. Love it when the title of the puzzle works that way. Gives a lot more breathing room in the grid without the constructor having to worry about cramming in the punchline. HOWEVER, if you didn’t solve in Across Lite, chances are you were annoyed by this puzzle (at no fault of the constructor).

THEME: Names of fingers are “divided” by black squares.

This is frustrating. The constructor did everything right. Fingers in order. Great title. Lively answers. Fun clues. Bonus fill like EATEN AWAY, BACK TO YOU, ORDER FORM, TALLADEGA… But those theme clues ask way too much of the casual solver (Count [x number] of letters in the theme answer, then add them to [y number] of letters in the neighboring theme answer). The visual element is lost, and the solve is just plain obnoxious.

Universal plainly states in its submission specs that it cannot accommodate circled letters, but it’s open to “workarounds.” But this is not a workaround if you’re solving in one of the many papers/webapps where this is published. It’s a nightmare. Solving in AcrossLite? No problem (even then you’re stuck with the clunky clues, though). This doesn’t help build an audience. It repels newer solvers.

Attention Universal: Every other major publication has figured out how to circle squares when the theme necessitates it. Your turn. It’s such an easy fix. Why are you willingly being so dated? Look at all the puzzles represented on this site… it’s like you’re asking to be the underdog in quality.

I constructed a Universal puzzle that depended on circled squares, and had quite a few friends who are not constant solvers seek it out. That puzzle took a crazy amount of time to construct. Not a single one of those solvers understood the theme, but they dutifully solved it anyway. I was actually embarrassed. Think they’re excited to solve another 21x? Doubt it. Circled letters would’ve sold it.

I know that David has been pushing for this fix since he took the reins as Universal’s editor. Why won’t anyone listen? It’s such a shame that so many solvers will not be able to appreciate Brian Thomas’s work today.

I say fix the problem… or stop publishing work that requires circled letters. The former seems so much more obvious. Sorry, Brian. You deserved a much better write-up.

How do you star-rate this? It’s a 4 star puzzle with a 1 star execution that’s not the puzzle’s fault. It depends on the platform in which you solved it. 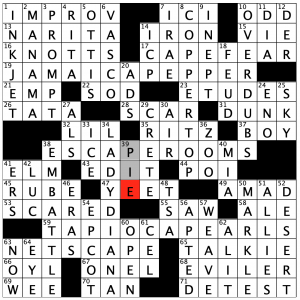 This puzzle made me think of The Incredibles! You’ll see why:

See what I mean? Remember the key scenes about the bad guy’s cape? If not, go watch it! I think it is still on Netflix! 4.3 stars for Matt this week. 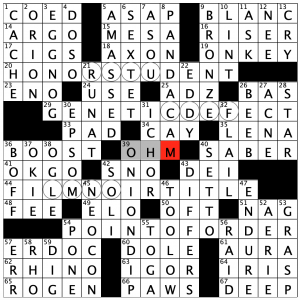 Fairly fast solve today. I was curious, as always, as to how the circles would be utilized. Here are the theme answers (circled letters will be red):

Nice! Again, not too hard, but it is a Tuesday. I am running late today, so I will not ramble, other than to say I enjoy Roland’s puzzles! 4.2 stars.