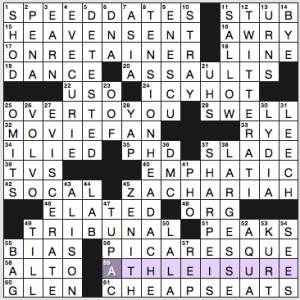 Oops, it’s getting late. Time to get this post published! Let’s be brief.

Fave fill: SPEED DATES, HEAVEN-SENT, “OVER TO YOU,” literary PICARESQUE, ATHLEISURE (if you haven’t heard this term before, well, now you have, so don’t whine), the CHEAP SEATS, the dreaded TENSION HEADACHE, and wrinkly SHAR-PEIS.

Did not know: 4d. [Journalist whose mother, father, sister and husband all won Nobel Prizes], EVE CURIE. What a fascinating life she led!

Unsure about: 5d. [Infamous], DETESTED. You can be known for doing bad things without being outright DETESTED, no?

Don’t care for: 32a. [Cinephile], MOVIE FAN. Movie buff or film buff, maybe. “Movie fan” feels like a wishy-washy phrase that doesn’t rise to the level of being crosswordable.

THEME: The top of each theme is a crop 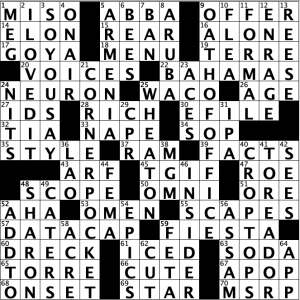 This is a CUTE theme, but with the theme answers hidden in the downs, I had solved much of the puzzle without seeing them, which meant for me it was a theme that’s enjoyable after you solve, more so than one that assists in solving. CROP TOPS is a great entry in general and was the perfect descriptor for a fun selection of answers.

If I’m picking NITS, I would say that having long down answers the same length as CROP TOPS and SO YOU SAY right beside those answers, made the theme stand out less, but TOREADOR and I LOVED IT are strong enough that it didn’t bother me too much.

Since I spent much of the puzzle not seeing the theme, I was reading in to some other answers that felt too repetitive not to be anything – like TERRE / TORRE and SCOPE / SCAPES – but with a solve that was as smooth as this, I wasn’t held up by those thoughts for too long.

Best clue of the day for me was for DATA CAPS [What might stop a stream?] which genuinely made me laugh when I figured it out.

Would I say I LOVED IT? Not quite – but I did enjoy it very much.

“Wow, this is smooth” is something I said, out loud, to absolutely no one, while solving this puzzle from Patrick Berry (because of course it is!). No section of the grid felt choppy, no cross was unfair, no entry unearned. I decided to warm up today on the other themeless puzzle that comes out on Fridays, and the contrast between this one and that one was *stark* (but the other one was also meant to be much, much harder, so I suppose that’s an unfair comparison). 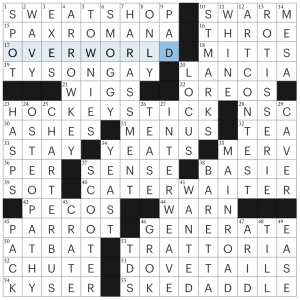 So many things to love about this puzzle. For one thing, I just spent 20 minutes googling “OVERWORLD” to try to understand what it is. I enjoy videogames and play a few RPGs casually, but I’ve never heard this word, and was downright delighted to learn that it existed. Learning things in puzzles is the best! I have to say, though, I’m still not 100% clear on whether the OVERWORLD is the game map or the actually gameplay… space. It seems like this varies from game to game? Like in older Zelda games, you play on the OVERWORLD, whereas in newer RPGs, the map/OVERWORLD is more for navigation? Commenters, please clear this up for me.

One other note about OVERWORLD, and this is by no means a dig against the constructor but rather an observation that I also noticed when writing up this week’s Monday New Yorker: it’s a little surprising to me how often clues get taken from the first line of the entry’s wikipedia article. I guess I shouldn’t be surprised? I also construct occasionally, and have definitely looked entries up on wikipedia in the process, but the clue on OVERWORLD and several other things I checked up on from Monday (e.g. the old nickname DESERTRATS for “gerbils”) were taken right off *the first line* on wikipedia, almost verbatim. I suppose that’s where the most interesting or salient points about an entry are likely to be located?

A few other points:

I figured out the theme immediately and wondered what the revealer would be. I had a theory, which turned out to be wrong.

The theme answers are phrases with AD removed. Wackiness results. 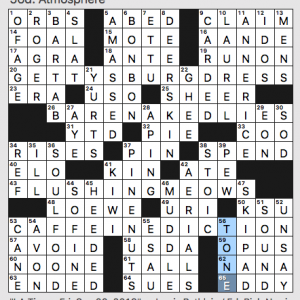 And the revealer is not something about AD BLOCKER but rather 47d [Ubiquitous YouTube button … and a hint to four long Across answers], SKIP AD.

What I didn’t know before I did this puzzle: that the USO was founded under FDR. Further research shows that it was created by Mary Ingraham in 1941 in response to a request from President Roosevelt.

I leave you with my favorite Barenaked Ladies song. 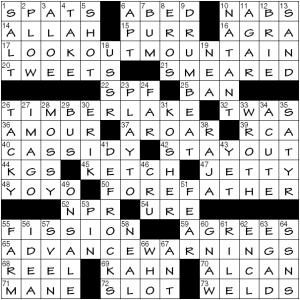 This was a very smooth solve, with only the slightest of pauses while filling the lower right section. My entrance to the area was squibbed by presuming 54a [Script add-on?] was something internetty and thus URL rather that the suffix -URE. That led to uncertainty regarding the quote in 51-down [“Courage is knowing what not to __”: Plato] as FL–– and then 60d [Act like a rat, say]: bail? sing? tell? But instead the latter was GNAW and the former FEAR. Don’t fear Play-Doh®, kids. Even if it does smell weird. 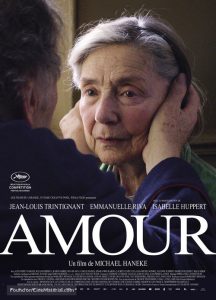