The letter A is added to each of two words in a common phrase or name. 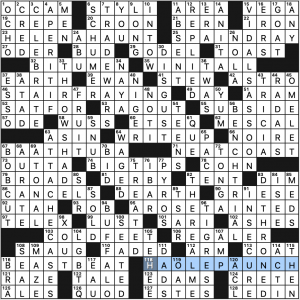 A nice set—consistent and with some flashes of cleverness here and there.

The fill falls squarely on the shiny side, but there are a few head-scratchers as well. I’m happy to CELEBRATE APERITIF, SCHUMER, TRADE WARS, VIDAL SASSOON, THROW SHADE, ATTACHE CASES, BOB CUT, THE REAL ME, INSECURE, BUFFALO, TIGRESS, WIN IT ALL, BIG TIPS, and COLD FEET. But BITUMEN [Asphalt ingredient] and AURATE [Ethically-sourced gold jewelry brand] took way more than their fair share of my brain power, especially where they crossed NAYA and TELEX respectively. Neither did I know BENCH TRIAL [Proceeding after a jury waiver], but at least I was able to infer that one.

I knew GRIESE [Last name of father-and-son quarterbacks Bob and Brian] off-hand, but I’m wondering if its crossing with TONGA [Its capital is Nuku’alofa] caused trouble for some solvers.

SMAUG [“The Hobbit” villain] reminded me that I had to take away my daughter’s nerd card this week. While playing Alexa’s Feel the Pressure, she got the question, “What kind of creature, starting with D, was SMAUG in The Hobbit?” She answered “dwarf.” D’oh! I have failed as a father. :(

Solid theme and a boatload of strong fill. 4.1 stars. 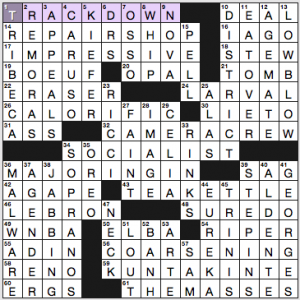 Is it just me, or was this one actually pitched to the easier Friday level? A spacious 66-worder with lots of fresh fill and fun clues, it worked for me.

1-Across kicked things off to a good start. (Not that I actually filled that in first, mind you. I think I started with BOEUF and TOMB.) TRACK DOWN is a creature that is 7/9ths consonants, an utterly familiar phrase and yet the entry has zero priors in the Cruciverb database, likely because of that vowel shortage. REPAIR SHOP, CALORIFIC, CAMERA CREW, MAJORING IN, TEAKETTLE, KUNTA KINTE, THE MASSES, TRIBECA, MALWARE, JABBING, BANH mi, EAT OVER, and LOW BLOW are also cool fill. The whole grid has just four 3s, which is good to see. 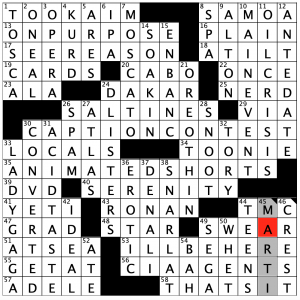 The LAT Saturday this week is pretty wide-open, and maybe even a tad harder than they have been of late. It is definitely an odd looking grid, but there is probably no way to remove any of the black squares and not make the construction exponentially harder. The grid is symmetrical any way you turn it, so that is nice. There are a ton of 5 letter words in this grid, whereas only 10 entries are longer than 8 letters. That seemed low to me for such a wide-open design. All in all, I still liked it. 4.3 stars. 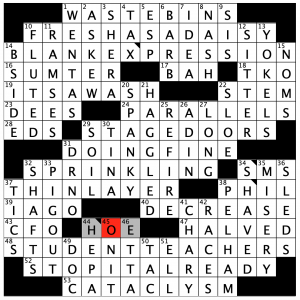 This was a tough one. My prediction last week was right – I thought this one would be a little thorny. There are tons of long answers in this one, including a nice 9-10-9-10-9 stack in the middle. The long answers weren’t too difficult, although I thought 14A started with BLANKET! But some of the shorter clues really gave me fits. It seemed to be a steady solve, but it still took me nearly 20 minutes. You should already know I like Greg Johnson puzzles, and even though this one was a bit tough, I enjoyed this solve. 4.5 stars today.

Did you learn Every Good Boy Deserves Fudge? Or Every Good Boy Does Fine? I’ve heard them both used pretty much equally. Then of course, you put your FACE in the space. I learned these mnemonics dutifully as a tot, and my 5-year-old brain didn’t realize until years later that there was actually logic in how the lines were named. I wondered Why the hell didn’t my piano teacher just teach me the rationale behind the labeling of the staff?

I did fine though. And I wasn’t all that good a boy.

THEME: Classic mnemonic for the treble staff + something else = common phrase

I liked this theme! It’s always a good feeling when you know you have an edge in the theme answers, but they’re not all immediate gimmes either (I had the first part of each no problem, but still had to puzzle out the second).

I wish the second part of each of the themers had a connection. I thought after uncovering the first two, we were going for masculine words (MAN, GUYS) which would’ve been cool (albeit impossible) since the mnemonic revolves around a BOY right in the middle.

Still, a pleasant solve with a tight grid, although I’m not sure if the clue for 2D is accurate [Something you can’t do] TABOO. Don’t we do taboo things all the time? I mean, we shouldn’t, but we can!

P.S. As a piano teacher, I try to avoid using the mnemonic in favor of teaching the logic behind the naming of the lines/spaces. It rarely works, and I inevitably fall back on the mnemonic. Guess there’s a reason it’s been around forever.