We have a synonym theme today in which each second word in the theme entries is a homonym of a word meaning “departs.” 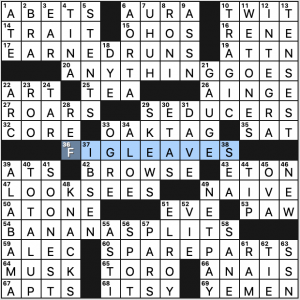 Solid enough, I suppose, though I find it hard to get too excited about a synonym theme unless there’s something wildly cool about it. This falls in the category of “good” but not “great,” hence I find the title presumptuous.

Of course, I didn’t even see the theme until after I was done with the solve, so it made no nevermind to me.

One nit I will point out is the presence of eight-letter entries in the Across direction, especially LOOK-SEES, mimicking theme answers. I’m torn in that I love that as an entry, but for a brief moment, it did make me think it was a theme answer.

The rest of the fill is solid though not stellar. The big NE/SW corners work well with WET ONES and INTEGRA as the stand-outs.

Beyond that, there’s just not a lot of zing. And weird and stale entries like OHOS, KNACKS, PARS, AINGE, RONI, ATS don’t do anything to improve the situation (especially when 57d PARS could easily be PATS or PADS to make a more sensible plural).

One clue I will point out is for 66a ANAÏS [“Hadestown” writer Mitchell]. It’s nice to have a new clue for this venerable crossword entry. I expect we’ll see a lot more of it since Hadestown took home this year’s Tony for Best Musical.

Workmanlike puzzle without a lot of flair. Solid, but that’s about it. 3.3 stars. 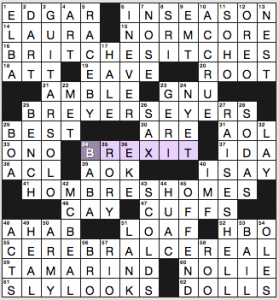 The BREXIT theme (34a. [Subject of a 2016 U.K. referendum … or a hint to 16-, 25-, 41- and 55-Across]) in this group creation is still topical—though one wonders if Brexit will become a failed footnote in history or if it’ll actually come to pass. The theme entries in the 1×15 grid are made-up two-word phrases in which the first word contains a BR and the second drops it:

The theme’s okay, but I didn’t love it aside from 55a.

THEME: Hitting for the cycle today with each theme beginning with a type of baseball hit 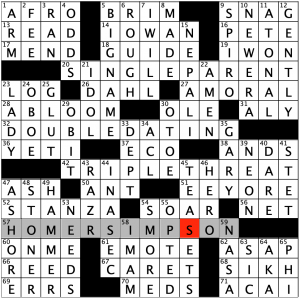 In an embarrassing but not totally surprising turn of events of for this non-baseball person, I went through this puzzle getting each theme answer, got to HOMER SIMPSON, and my first reaction was “what does HOMER have to do with SINGLE, DOUBLE, and TRIPLE…” and I felt very dumb when it finally hit me like a *insert baseball ‘hit’ analogy here*. All of these answers work really beautifully for the theme and just as answers – I especially loved the cluing of SINGLE PARENT as an adjective rather than a noun.

Most amusing clues of the day were TEA SETS [Service groups?] and GENTLY [How to rock a baby]. Some other favorite answers were BIG NAMES, EEYORE, LADY Bird, ALY Raisman, and RAZR.

I am choosing to take the appearance of SPIRO Agnew crossing AMORAL in the grid today as a good omen for future executive branch resignations. It seems that one could write an entire story of Presidential politics in that corner when you add to that IOWAN, Mayor PETE, NEW ERA, and I WON all situated so close to each other.

I wasn’t crazy about how broken off the Northwest and Southeast corners felt, but they were fair corners so even though they didn’t feel connected to the rest of the puzzle, they didn’t take away too much from the overall solve. 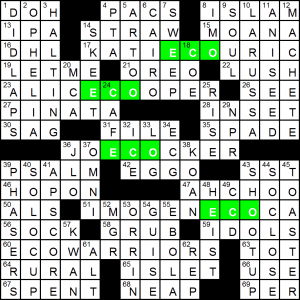 Hmm, the puzzle’s relying a heck of a lot on its current revealer, ECOWARRIORS, to carry it through. I found the theme concept a little light though: simply people’s names who are *E CO*: KATIECOURIC, ALICECOOPER (also the band), JOECOCKER, and IMOGENECOCA.

Other things worth noting: 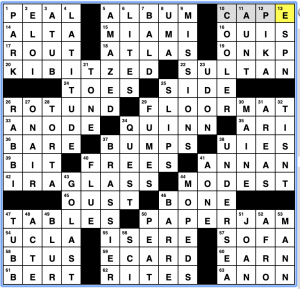 Today’s AVCX is from Byron Walden, and the theme, like some of the cluing this week, is a little trickier than usual.

Various bits and pieces of the fill have one letter that needs to be placed on the perimeter of the grid since the answer doesn’t fit in the grid squares allotted.  Going around the grid clockwise: 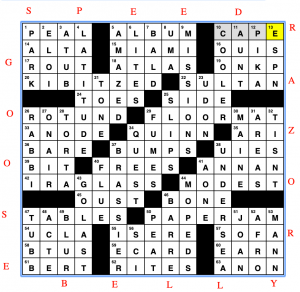 All of that combines to look something like this.  Each of the sets of extra letters makes what’s clued by 37A‘s revealer:

Byron and I exist on different crossword wavelengths, so this was a challenge, especially with fill in the grid that didn’t match my expected answer for the clue.  I had completely forgotten about things like the recall of Toyota FLOOR MATs in 2009, and also wasn’t aware Kofi ANNAN had written a memoir.  It’s nice to pick up a few new facts to help triangulate crossword answer approaches, though.