PRISM (69a, [Light refractor, or, when broken into three parts, a hint to the theme answers]) is our revealer today, except you have to break it in the following fashion: PR IS M. In other words, our theme is phrases where one of the words has the bigram PR changed to a single M. 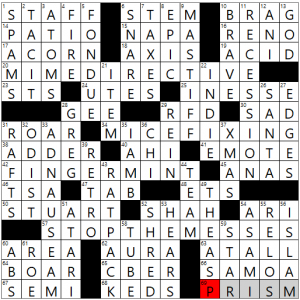 As letter-changing themes go, this works fine. There’s some humor here, but I feel like it could have easily been ratcheted up to good effect. I do like the use of the word PRISM as the basis for the theme.

In the fill I’ll highlight AD NAUSEAM (and I even spelled it correctly this time, ending it with -AM instead of -UM), MASTIFF, RAT PACK, THE ASP, and FONDUE. Do people do FONDUE much anymore? We like to do it a couple times a year maybe, but only if time and mood allows.

There’s a fair amount of crosswordese in the fill (RFD, CBER, IAMB, ETS, RELOS, ANAS, AS AM I, etc.), and it gets to be a bit much. There’s nothing too outlandish, but it does weigh the grid down. Good grief! I just spotted that fifth row with STS, UTES, and IN ESSE. That’s a contender for the crosswordeseiest row, for sure.

Cluing felt unusually straightforward for a Thursday, judging by my relatively speedy time. I will point out 8d‘s clue [“Totes awesome, dude!”] for EPIC. Granted, I’m not the one to ask what kids are saying these days, but “Totes awesome, dude!” does not ring true. As Urban Dictionary puts it in its top definition for totes, “This word is commonly used by teenage girls.” This means, combining it with bro-ey “dude” and “EPIC” just doesn’t work.

Good wordplay on display here, but it could have used a bit more humor and a bit less crosswordese. 3.5 stars.

I was very glad to see a puzzle with both vowels and consonants. It was a good puzzle, too – a bit harder than the last few FB themelesses.

I suspect the central grid-spanner was the seed entry for the puzzle: 35a [Melatonin product from Vicks] is ZZZQUIL PURE ZZZS. Who could resist that collection of Zs? Not Peter! And he’s skillful enough that the crossing entries did not feel forced. 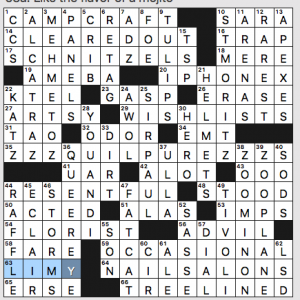 What I didn’t know before I did this puzzle: that ALCATRAZ was home to the West Coast’s first lighthouse, and that KTEL made something called the Blitzhacker food chopper. 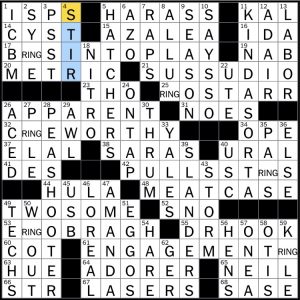 This felt like a really solid Thursday puzzle to me.  Exactly what I look for from this venue on this day – something out-of-the-box, grid-wise (like a rebus square), and reasonably mid-week cluing:

Again, the execution on the theme here is super clean.  A tight set of answers that put the (RING) squares in a nice distribution across the theme answers, and down fill that also feels straightforward – SYRINGE, ALLURING, PRINGLE, PARINGS, WRING OUT, and KRINGLE.  Some the fill towards the edges of the grid (like ISPS, SASE, STR) is less than ideal, but I liked the references to KAL Penn and IDA Lupino in the upper right’s cluing.

I was absurdly proud of my ability to spell SUSSUDIO correctly on the first try without any crossings. If you’re a fan of music podcasts, I highly recommend Slate’s Hit Parade, which talked about the chart dominance Genesis and its offshoots (including the careers of Peter Gabriel and Phil Collins) had in the 80s. 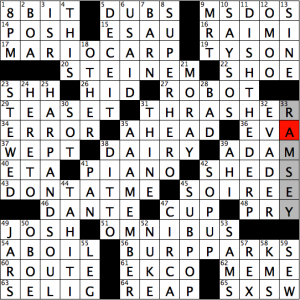 A pretty simple theme today, made fairly clear by the title: Change “T” sounds to “P” sounds, to punny effect:

As far as I can tell, there’s no revealer, which is totally fine since it’s not necessary. I’m also not sure if there’s a reason to have the number 8 in the grid (8-BIT crossing 8-PM at 1a/1d) other than “Why not?”. 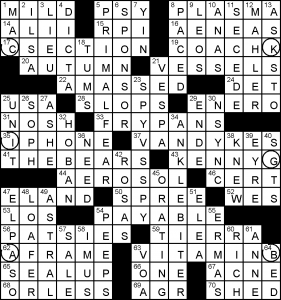 I think this puzzle’s theme can best be described as quirky. The revealer, SPYVSSPY, divides the grid in two left and right halves. I feel like that left-right apposition is used at least on some occasions in the strip? It’s been a while. The actual SPYs are represented by 3 triplets of circled letters. Read vertically, they spell CIA and KGB. Two make these circles a tad more significant, when read across, each answer uses the circled letter as a stand-alone letter. We have: CSECTION, IPHONE and AFRAME on the American side and COACHK, KENNYG and VITAMINB on the Soviet.

[“Miracle on Ice” winners: Abbr.], USA. But not winners against England in their (Men’s) Rugby World Cup opening game today. Canada also played today, losing to Italy. (South Africa also lost their first game, though it was to New Zealand, and barring upsets, both teams should qualify.)