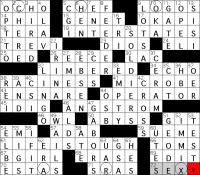 hello and welcome to episode #591 of matt gaffney’s weekly crossword contest. for week 4 of guest constructor month, we have rich o’malley‘s puzzle, “Back and Forth”. the instructions this week tell us that we’re looking for the constructor’s favorite number. intriguing. what are the theme clues? it’s unclear what the theme is, but the first three across clues have extra notations:

i still haven’t solved the meta, but i noticed two interesting things about the numbers in parentheses: first, there are seven of them, perhaps corresponding to the seven “buried treasures”; and second, each set of parenthetical numbers adds up to 14, which is also the height of this grid. (it’s a 16×14 puzzle.) combining this with the observation of the circles in the top and bottom rows, i’m led to the conclusion that we are supposed to trace out a path from each of the circles in the top row to one of the circles in the bottom row, spelling out some words with the enumerations shown. that seems like a very strong inference, right?

the problem is, i just haven’t been able to make it work. trying to spell things out boggle-style (while still moving down a row every time) isn’t yielding useful results. in particular, the 2-letter answer at the end of the third chain would seem to have to be DX, IX, or TX, and that doesn’t look promising.

what kind of “treasures” should i be trying to spell, anyway? well, there’s a hint in the clue for 27d: {Gifts for a certain wedding anniversary (if you look it up, bookmark the page — might come in handy soon)} EMERALDS. that’s the traditional gift for a 55th wedding anniversary (and yes, of course i had to look that up). combined with the instructions (which ask for a number), i’m now inclined to think that the seven treasures are all gifts made of the same material, which might correspond to a specific one of these anniversaries.

but there’s still the problem that you can’t really spell things out along the grid in the way the puzzle strongly suggests you should. maybe “buried” means that we somehow have to change some (or even all!) letters along the way, perhaps in such a way as to maintain a valid crossword grid? i can kind of see it in some places—in the bottom row, the circle where ESTAS meets ERA at the A would actually be better as an E, and the circle where SRAS meets UAR at the R would also be better as an E. but the X where SEXY crosses IMMIX couldn’t change to anything and still make valid entries. (SEC’Y is borderline but acceptable; IMMIC isn’t anything, though.)

what to make of the title, “back and forth”? i haven’t figured that out yet, either. if it’s trying to suggest an overall shape for the paths i’m supposed to be tracing in the grid, i am just not seeing it. perhaps it’s suggesting that i should work back and forth between numbered squares in the grid and the anniversary gift numbers? that would be interesting—it would mean that the paths are not contiguous segments (as i assumed from the 14s), but instead we would find a treasure corresponding to one of the traditional anniversaries, then jump to the number corresponding to that anniversary, and there find another word. that sort of thing. that would be intriguing, but i think the 14 thing is too compelling.

or maybe the paths are contiguous, but we don’t read the words off of just one path, instead working back and forth between the three paths? that would be kind of bonkers. i kind of like that, though—it would certainly make it hard enough for a week 4, but still fair and solvable with the nudge from the title. (brb, going to go try it real quick.)

okay, well, that didn’t work. too many degrees of freedom. if i can take any letter i want from each successive row, i can spell out things like CONTAINER (9) and HEADDRESS (9) but i don’t know if those suggest particular anniversaries. and i still don’t know what to do with the 2-letter treasure at the end. AX?

there’s quite a bit of crummy/forced fill, no doubt due to the constraints of hiding long chains of words in the grid. the weirdest ones that jumped out at me were totally unfamiliar abbr {Particle board alt. sold at Lowe’s} OSB (googling did not help me figure out what this stands for, although i’m guessing the B is board) and {Indonesian Sea} CERAM, which is close enough to CERAMIC to make me think long and hard about guessing 9 as my hail mary answer, since the traditional 9th anniversary gift is pottery.

and, since i’m now out of time, i guess that’s what i’ll do. i wish i’d figured this out, because it tantalized me all weekend. i guess i’ll find out from the comments what i missed.

This entry was posted in Contests and tagged Rich O'Malley. Bookmark the permalink.