Our theme today is phrases that start with a farm animal that have been clued to indicate said animal has escaped. 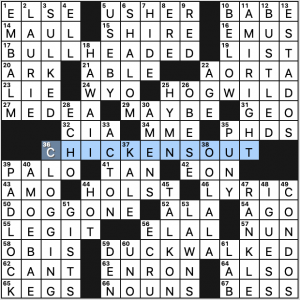 For a time, I thought this theme was going in a whole other direction.

I like this theme; it probably wasn’t easy finding phrases that would work with the general idea of animals escaping. So, even though there are inconsistencies here and there, I enjoyed the fun, imaginative angle of a farm run amok.

Things to like in the grid: “AM I RIGHT?” [“Don’t you agree?”] though I prefer the question in its wink-wink form (AMIRITE?). Also, plural AMOEBAE, OO LA LA, HAWAII, SHALOM, and “I GUESS.” CAN’T say that anything RANKLEd too much, so that’s good!

Overall, this puzzle has an imaginative theme that I found enjoyable. It suffers from a few inconsistencies, but the fun theme won me over. 3.7 stars. 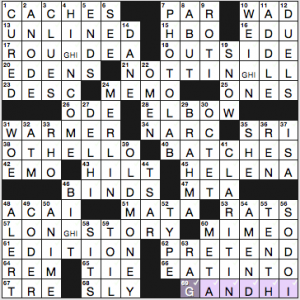 You know how when you stay up too late, you still wake up early and now you’re sleep-deprived? I have a sleep debt to repay, so I’ll be quick here. The rebus theme centers on 69a. [Icon born 10/2/1869 … with a hint to three squares in this puzzle], GANDHI, on his 150th birthday. There are three rebus squares containing GHI, which you can parse as “G and HI” (though “G, H, and I” would be smoother … but I am so tired of people misspelling the name as Ghandi). “G and HI” is weird, it must be said.

The grid’s peppered with other Indian fill. The honorific SRI, MATA ([Mother, in Mumbai], I learned something new), ROTI flatbread, SNOW in the Himalayas, populous DELHI, BRAHMA the Creator, and a tech CODER. (What? There are a lot of Indians working in software, both at home and in their adopted countries.)

THEME: The start of each themed phrase is a synonym for run 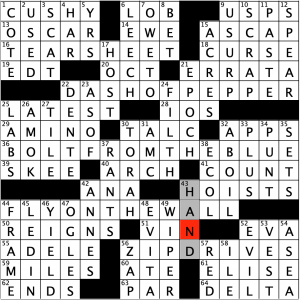 This puzzle was serviceable. The theme is a classic one, and the puzzle is well constructed, but I finished feeling like something was missing. With a word like run, with its seemingly endless list of synonyms, this group feels a bit random – why these five words? I think I would have been more satisfied had there been some other connecting thread as well.

Best clues of the day were for BET [Something to see at a poker table?] and COUNT [Rank of de Monet in a Mel Brooks film].

My favorite thing about this puzzle is seeing Renee ELISE Goldsberry at 61-Across, because it gives me the chance share one of her songs the hilarious Co-op episode of Documentary Now! 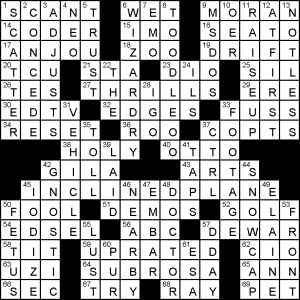 I’m not sure this puzzle holds up under close scrutiny. The left-right grid features one revealing answer: INCLINEDPLANE, and then four diagonal hidden words: JET, GLIDER and TURBOPROP are plane classifications based on propulsion; and then FIGHTER is thrown in which is a classification based on use. You have JETFIGHTERS and (very few) TURBOPROPFIGHTERS. Also PLANE here is exactly the same sense as the name refers to the flat surface of the wing…

With only one direct theme answer though, the puzzle mostly played like an easyish themeless with many solid answers, but little that stood out. COPT/GNOSTIC mini-theme is not likely to be seen again for a while. 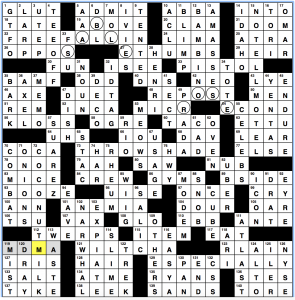 Apologies for how late this week’s AVCX review is going up – it’s been a week at work, and we’re only at Wednesday.

This week’s puzzle is a big grid from Aimee Lucido, and the title “Color Cast” gave me an idea of what was going on that proved to be true.  As theme clues appear in the grid:

That’s not much to go on, but each of these clues’ immediate neighbor has a “—” clue that suggests something else is going on.  Using the circled squares in the grid (and, in my case, an assumption of where the circled squares would go for the two theme answers that didn’t render their circles in the .PUZ file), each set can be connected by a color in a way that finishes the initial clue:

The revealer at 73A, “Be subtly insulting … or what parts of four answers in this puzzle do”, spells it out – each of these theme answers could be said to THROW SHADE.

I’ll leave it there since it’s late, but I liked this grid, as well as the two long bits of NO-TELL MOTEL and COCONUT MILK running down the grid.