It’s always fun to come across a Pasco grid. This one kept me guessing for quite a while but provided a satisfying aha moment.

Each theme clue is clued straight, however the answer is embedded inside other letters in the grid. Those other letters spell out a shade of red. This is all made sensical by the revealer IN THE RED (61a, [“Owing, like the answers to the starred clues”]). The clue answer + the shade of red combine to form a legit (though unclued) name or phrase. 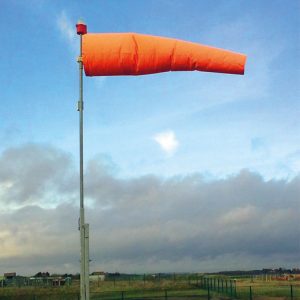 Pretty spiffy theme, even with the reliance on crosswordese like ODER and D-CON. A good Thursday theme will befuddle you for a while until you can manage to get yourself unfuddled.  This fit the bill.

And the long fill doesn’t slouch either. We have NOT PRETTY, RIDES SOLO, STRIKES OFF (I wanted STRIKES OUT) and ENGINE ROOM [Scotty’s spot]. Because I wanted ENGINEERING for this one early in the solve, I was suspicious we had a rebus theme on our hands.

Other goodies: DRANK UP, NAT-GEO, and colloquial “C’MERE” and “YAY ME“.

New to me: MUNROE [Ororo ___ (real name of the X-Men’s Storm)]. I like to pride myself on my geek knowledge, but this was beyond me. Still, with the mainstream appeal of all the X-Men films, I’d say it’s still a fair entry. The other Marvel comics entry, STACY [Gwen ___ (“Spider-Man” character)], was a gimme.

Also, FLUKY [Happening by chance]? Even if it’s not a real word, I like the sound of it.

Let’s play a game of Guess Your Constructor’s Hobbies. Your clues are ONE AM [When some weekend parties end], DID [Downed, as shots], and DRANK UP [Emptied one’s glass]. Time’s up. Make your choice. If you guessed “macramé”, seek help. 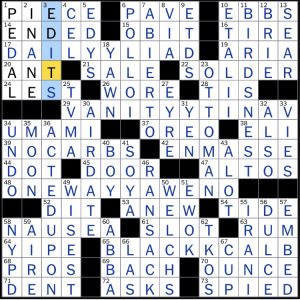 Today’s NYT almost feels Wednesday-ish in difficulty, which is nice after a Thursday-ish Wednesday puzzle. And it appears to be an NYT debut!  Ricky Cruz’s theme is pretty straightforward, though it took a few theme entries and some crossings to confirm exactly what was happening:

Each of these answers is a phrase where the word MIRROR has been replaced with a mirror image of the first word – DAILY MIRROR, VANITY MIRROR, ONE-WAY MIRROR, and BLACK MIRROR.  I’m not sure how I feel about VANITY MIRROR – it’s a little green paint-y, and I think of dressing rooms as places with three-way mirrors in the mall instead of the mirror in a vanity – but the rest of the entries are solid.

ABIERTO (Spanish for “open”) was tricky, but the rest of the fill here felt pretty smooth.  I liked the callback to the 2008 Olympic stadium, the BIRD’S NEST.

Interesting? Actors whose names are devoid of the following letters: C, B, J, G, D, S, Q, R, U, O and P. Okay. That’s less than half of the alphabet. I’m not sure I care all that much. It’s one of those things that you look at, shrug your shoulders, and move on. The theme does not assist in the solve whatsoever.

Standard fill. Nothing really wrong with puzzle, though I found it somewhat difficult to decipher the revealer. Wasn’t excited by the theme at all, though. 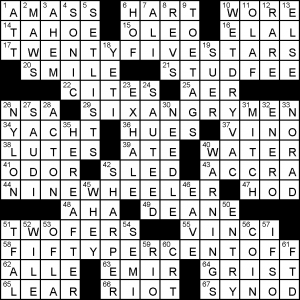 Sigh. Another puzzle with ambitions, but kinda half-baked. First off, FIFTYPERCENTOFF is a wordy and awkward revealer. The other three answers start with numbers, but the numbers are half what they normally are: NINEWHEELER and SIXANGRYMEN work, but then there is TWENTYFIVESTARS. Well yes, Old Glory has FIFTYSTARS, but that’s not an in-use phrase at all. Were there NO genuine phrases that with new numbers came to 15 letters at all that this had to be resorted to? It seems such a wide-open theme there must be… a lot of options out there? 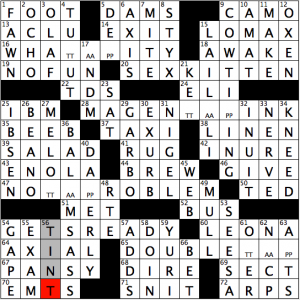 Today’s theme is explained at 65a, DOUBLE TAP [Subtitle to the upcoming “Zombieland” sequel, and a hint to the crossings of certain squares in this puzzle]. Three long acrosses have the letters TAP in them, but those letters are doubled in the crossing down entries:

A timely revealer, with a nice execution overall. The bidirectional rebus was a bit confusing at first, but I think it makes enough sense in hindsight.