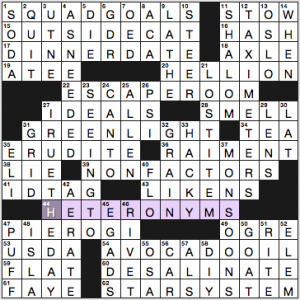 A fresh Friday puzzle with lots of cool fill. My favorites: SQUAD GOALS, even though it feels like it might be three years out of date. An OUTSIDE CAT, which probably kills any number of birds out there. DINNER DATE. HELLION. ESCAPE ROOM, which is a thing I’ve only done twice and that’s wrong. GREEN-LIGHT. HETERONYMS, clued as [Polish and polish, e.g.], the capital-P Polish being pronounced with a long O that lowercase polish lacks—and then Polish popping up again in the PIEROGI clue.

THEME: Common phrases/things clued in relation to the names they end with 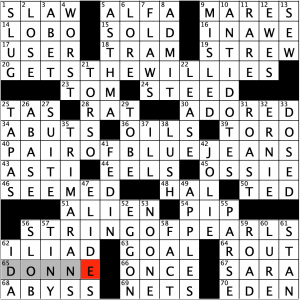 I love this theme – really it’s a lot of fun and I found myself wishing it was a Sunday size puzzle so there could more of it. I think it would work slightly better if all of the answers were ____ OF ____ or if all three of them were nouns, but GETS THE WILLIES ends up feeling a little out of place because of how different it is. That said, it’s a great answer and clue – and that didn’t at all take away from the enjoyment I had coming across the answers in the grid, but was more a post-solve observation.

The east side of the puzzle fell much faster and easier for me than the west. I had no sticking points and almost every answer felt very natural while filling in answers like ANTIDOTES, MISLED and just about the rest of the fill on that side but as I moved down and left, I had the opposite experience while filling in answers like TRIMARANS and ELIDES. Nothing in the puzzle struck me as unfair, just a bit inconsistent in difficulty level.

As far as cluing goes, I loved the cross of STAN and SARA with them both clued as Lees – and overall the clues felt like they had a lot of personality. They really kept the puzzle moving and gave it a voice, which together with this theme made for a great solving experience.

Random thing I enjoyed a lot today: EGG ON next to NO ONE is visually very cool and somehow feels like it could be the basis for it’s own word puzzle.

I mostly liked the theme, did not care for the revealer, and was not on the clue wavelength at all. Could have been the clues, or me, or both.

Each theme answer has IR added to a base phrase. 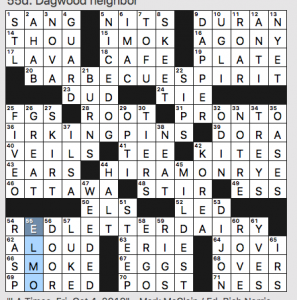 I do not think this needed a revealer, and it especially did not need 65d [April 15 org., or, as a plural, a hint to four long puzzle answers]: IRS. Maybe it’s the clue that makes this seem clunky. I dunno. It clanked for me.

What I didn’t know before I did this puzzle: that FIVE–O is slang for “police.”

I’m writing this from an airport gate waiting to board a flight to JFK, that famed airport located in its home of NYC, so that should give you a sense of how much I clicked with this puzzle (hint: a lot). As with so many New Yorker puzzles, this one hit on all the elements I love in a themeless puzzle: fresh entries, high-quality fill, and interesting or tricky cluing. Since I have to board that flight in a minute, I’m going to keep this relatively brief: 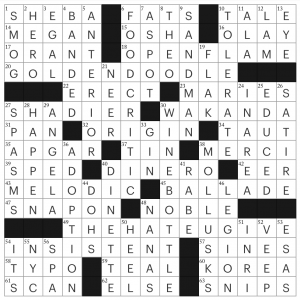 Overall, excellent and relatively easy puzzle, with just a small mark against for the only very occasional less-than-spotless fill.

P.P.S. If you somehow missed the banner at the top of this post, Queer Qrosswords 2 is now available! Check it out! You may  even recognize some of the constructors ;) 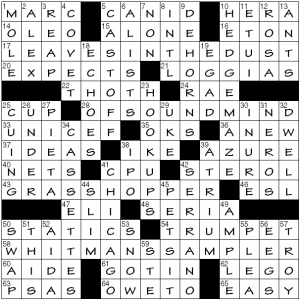 Literature is of course one of the signature purviews of the Chronicle, so this theme is on-brand for the crossword.

And that (presuming it’s ok to just use the first word of the compound in 43-across) provides us with Leaves of Grass, probably the most well-known work of 19th century literary personage Walt Whitman. Potential replacements for GRASSHOPPER: GRASS SPIDER, GRASS SNAKES, GRASS SKIRTS. 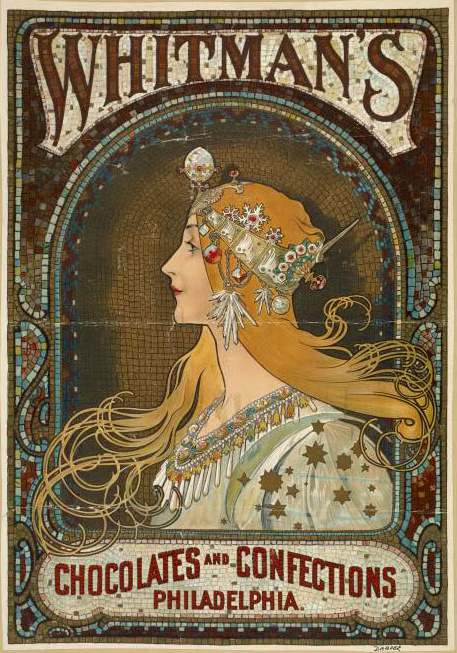 The namesake chocolatier of the revealer is Stephen Whitman of Philadelphia. Although his confections were first produced in 1842, the famous sampler didn’t appear until 1912.

Interesting enough material and cluing throughout, but the theme feels a bit slight for a weekly showcase crossword.

1 It’s a joke. I certainly know about petsitting.