There have been numerous puzzle themes based on board games over the years, but a quick search over at Cruciverb shows there hasn’t been one in any major publication with ENDGAME as its revealer. Here it’s clued via the recent Avengers film: [2019 Avengers movie, or what each starred answer has]. Each theme answer ends with a well-known board game.

Oh, by the way, this looks like it’s a debut for Jillian Greenspan! Congratulations on a very nice grid! 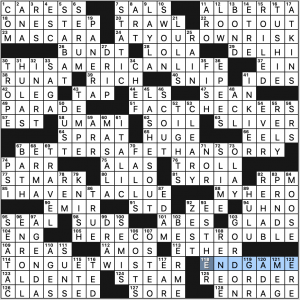 What a great and lively set of themers! Each one is fun in its own way, so kudos to our constructors for homing in on such an entertaining bunch.

If I had one nit to pick, and it’s the nittiest of nits to pick, it’s that each of the games is a branded board game except one—checkers. And if we want to get even nittier, all the branded games are Hasbro games except one—Twister, which is a Milton-Bradley game. But I like the set of themers too much to be bothered by this.

The fill isn’t so flashy when there are seven long themers, but neither is it ho-hum. If you get past the little bit of violence in LASHES OUT and STAB AT (which is actually clued [___ Mater (Latin Hymn)]), there are some fun moments to be found. I like the combo of LAYLA and LOLA, children’s author Beverly CLEARY, savory MASALA spices, colloquial “BEER ME” and “MY HERO“, the slangy GLADS (for gladiolas), the playful TUSHIE, as well as ROOT OUT, MASCARA, and AL DENTE.

I had no idea on ARO [Not prone to crushes, for short]. Apparently it’s short for aromantic, i.e. someone for whom romance is neither here nor there.

Fun theme and grid. Four stars from me. 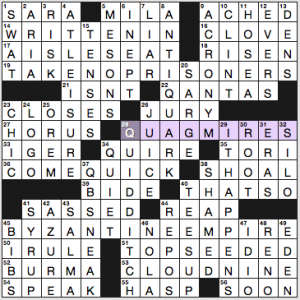 Aww, the constructor was so close to lining up five straight Q’s from square 22 to 37, but that one J snuck in. That Scrabbly vibe also gets a Z in the BYZANTINE EMPIRE, but despite the stunt angle with those Q’s, the only fill that left me cold was IGER, OREM, “I RULE” (this is an entry that needs to go away as quickly as it arrived), and lifeless HASP. I would pick on IDIO– but the [Prefix with -cracy] saves it—the 2006 movie Idiocracy was scarily prescient of the direction society was taking, though it seemed implausible at the time. I should watch it again soon. 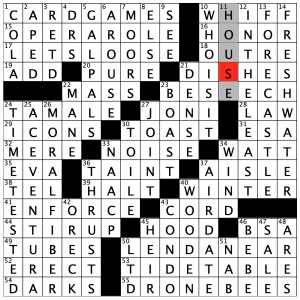 Yup! I am getting slower in my old age! This one was another nearly 8 minute solve, and these LAT Saturday puzzles usually take me about 5 minutes. I don’t think I am actually in speed solving mode, but I do seem to have slightly lost a step. Or maybe I just need a vacation! Gail has made a great puzzle this week, and even if I found it a little harder than normal, still a joy to solve. 4.4 stars from me.

I have a wedding to go to later today, so that should be fun! 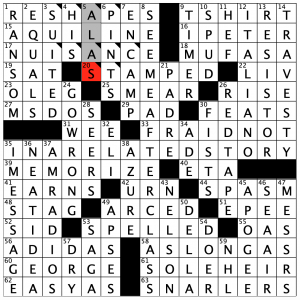 Not bad this week. Lester Ruff’s (Stan’s!) puzzle was certainly “less rough,” except for the NW corner. I had most of this filled in in about 8 minutes, but it took my another five minutes to suss out that last corner. I threw letters in at one point and checked them, thus the plethora of error marks in that area. Still a great puzzle; nothing overly difficult in this one. I think I was scared of this week being difficult, but that was not the case, so I am sure there will be a thorny one next week! 4.2 stars for this one.

I could go on; there was a lot to like! Have a wonderful weekend!