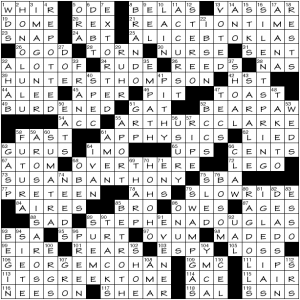 No revealer, but the conceit is practically telegraphed via the theme clues, prefaced prominently with either a bracketed all-caps ‘previous’ or ‘next’.

So, these people all familiarly go by their first name, middle initial, surname. Their neighboring gridmates are all three-letter initialisms that replicate the associated peoples’ initials. Hence, one can easily appreciate the ‘Initial’ part of the crossword’s title, but the ‘Public Offering’ part eludes me. Certainly it’s a common term, and commonly seen in crosswords as the three-letter initialism IPO, but—for instance—the trigrams aren’t all businesses, let alone publicly traded ones. Is it simply that these initials are being ‘offered publicly’ by being printed in a widely-distributed newspaper?

Not to overly slight this endeavor, but I can’t escape the thought that if this theme were in the Washington Post, Evan Birnholz would have had an additional layer of complexity or significance, such as the all-businesses notion above. Or perhaps he’d’ve ensured that the middle letters taken together spell a relevant word (almost like a meta). For the record they are B-S-C-B-A-M. Let’s rearrange them to … uhm … BABSCM (Barkin and Barocas, Superior Crossword Makers).

Three-letter initialisms unrelated to the theme material: 65a IMO (in my opinion), 93a BSA (Boy Scouts of America), 108d AMA (American Medical Association). 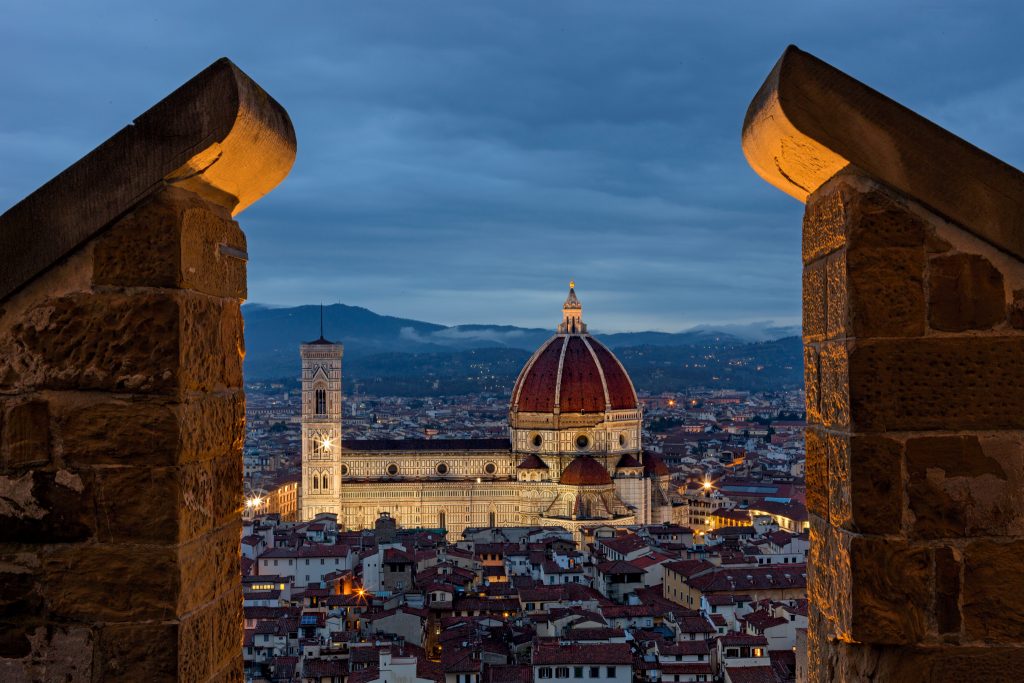 19a [Famous feature of the Florence Cathedral] DOME
(Filippo Brunelleschi)

This is a homophone puzzle. Each theme answer has a long A sound replaced with a homophonic letter combination, with amusing results. 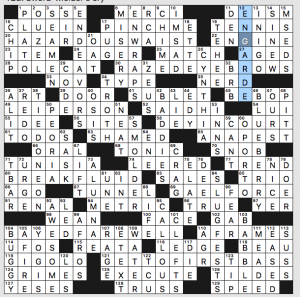 Aside from that last entry, I enjoyed this theme, which made me realize how much the order of entries influences my experience. I work top-to-bottom, and if the last theme answer is a clunker, I tend to think ill of the whole enterprise. Writing out the list forced me to realize that the rest of the entries are good and some of them are really funny. It’s equivalent to thinking a puzzle is really hard if I get stymied at 1a/1d even if it doesn’t take me any longer than usual. The mind is a funny thing.

What I didn’t know before I did this puzzle: see above re: OUZEL. I also did not know that the present-day site of ancient Carthage is TUNISIA, that Stephen King shared the first Bram Stoker award* for MISERY, or that T–BARs are vanishing.

*for those who also have never heard of this, it’s bestowed by the Horror Writer’s Association for “superior achievement” in writing horror novels, and King shared the 1987 award with Robert R. McCammon, who won for “Swan Song.”

THEME: Common phrases clued as the “Creative Endeavor” of its first word 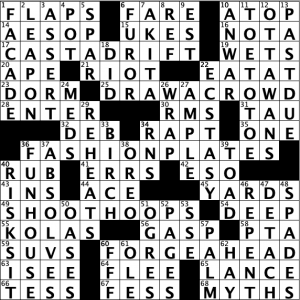 This was a great puzzle all around. Really fun theme, very well executed. This was definitely one of those puzzles that once I got one theme answer, I went searching for the others because I wanted to see what else they would be, and none of them disappointed.

Great fill today too. The puzzle stayed interesting throughout, with my favorite answers today TOE TO TOE, FUN HOUSES, ECSTASY, PAST DUE. Clue of the day goes to HAY [Arabian food?].

THEME: Every answer that crosses the INTERNATIONAL DATE LINE has a day added in the form of a letter. 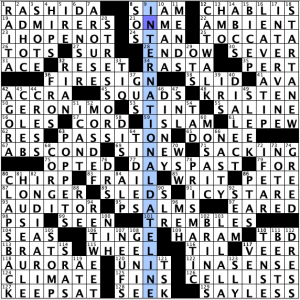 Two Universal puzzles to love today and not enough time. This puzzle is a thing of beauty. Theme is fantastic and the amount of theme-related answers, as well as the detail put into this is truly astounding. Each word, both with and without the added letter are solid answers, and they run through the week in order. So so impressive.

The Rest of the fill is fantastic as well. CLAPS BACK, ICY STARE, SAY LESS, INDIA ARIE…. I could go on and on with how great this fill is and wish I had more time to do so.

My apologies for the late write-up. Especially for such a cool puzzle. I’ll have to be brief too. 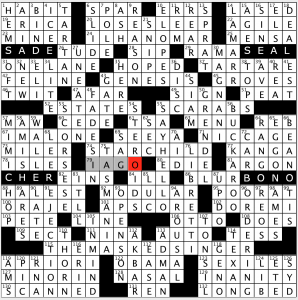 We’ve seen entries “overspilling” into black squares before, but this is exceptionally tight all around. Of course, even without the “correct” answers that include the black squares, the grid looks normal (i.e. everything in the white squares is acceptable crossword fill). But especially cool is that the “masked singers” are pulling triple duty, making sense in three different directions with wacky answers creating the bonus themers horizontally. Bravo!

It was fun to figure out, though it was evident something funky was going on from the get-go. Is it a rebus? If so, where? There are an awful lot of entries affected by the masked singers, and the AHA was a nice click.

Great puzzle all around.

I really wanted 101A [High school test fig.] to be PROCTOR, even though the abbreviation in the clue told me otherwise. I don’t want to tell you what I was doing while solving the puzzle. I would never sneak a peek at a crossword while proctoring a test on a SATurday. Never.