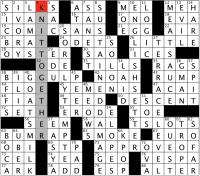 We have some down entries that suggest themselves to be themers, by virtue of their length:

I found this grid pretty tough (SIC BO!), so after solving I set it aside for a break of about a day. Then I checked in with solving buddy Jesse but neither of us got far; he managed to break through later and suggested I look at those long downs, which was one of of our first ideas. When the themers don’t relate to each other in terms of referential meaning or orthography (i.e. they don’t have similar spelling or letter patterns), it’s likely that there are words/phrases encrypted in the entries. And indeed that’s what we found; backwards in each themer is a name: 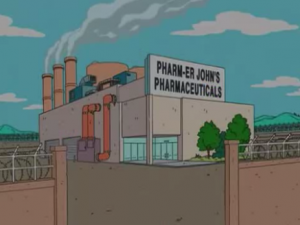 If you google john drug company, you might find a reference to this joke from The Simpsons

Five guys named John are hidden in the themers; because they are downs instead of the more common acrosses, the backwards names go up. Thus the answer to this meta is UPJOHN, a longtime manufacturing company in the drug industry. Upjohn was founded in the 1880s, and was the first company to synthesize cortisone for large-scale manufacturing. You’ve taken products manufactured by Upjohn if, before 1995 (when it was acquired by Pfizer), you were being treated for anxiety, pain, or male-pattern baldness, as some of their most popular drugs have been Xanax, Motrin, and Rogaine.

If you didn’t know that Upjohn had been a pharmaceutical company (and it barely registered with me; I grew up in Michigan and they used to be headquartered in Kalamazoo, so I must’ve recalled the name from reading regional papers as a kid), and you googled john drug company (which, quite a logical step, nice work), you might find a reference to Pharm-Er John’s Pharmaceuticals from a 2005 episode of The Simpsons. Overall, this played tough, and since the payoff wasn’t terribly familiar, I didn’t enjoy this one as much as other Fireball contest puzzles. Your thoughts?

I’ll leave you with this 1984 commercial for two popular Upjohn products, “Kaopectate for diarrhea and Cortaid for minor itches and rashes”:

This entry was posted in Contests and tagged Frank Longo. Bookmark the permalink.