I did this on paper at first because the notepad says “In the print version of this puzzle, 1-, 4-, 9-, 16-, 25-, 36- and 49-Down have a mathematical radical sign before their clue numbers.” I could have done it on the computer without missing anything. It’s a thin theme. I filled it in on the computer afterward so you all didn’t have to deal with a bad picture of my handwriting. 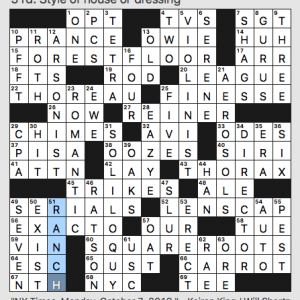 Each theme answer is very literal: it’s the square root of the clue number. 1d is ONE, 4d is TWO, 9d is THREE, 16d is FOUR, 25d is FIVE, 36d is SIX, and 49d is SEVEN. Just in case someone missed the point, we have 60a [Some Down answers in this puzzle]: SQUARE ROOTS. And that’s all. It’s certainly an accessible Monday theme. I hope new solvers keep at it. Even Monday puzzles are usually more fun than this.

Since it’s Monday, the rest of the fill is straightforward. Nothing really bothered me; nothing stood out as particularly notable or enjoyable.

What I didn’t know before I did this puzzle: that THOREAU wrote “Disobedience is the true foundation of liberty.”

We have a bit of alphabet soup in today’s LAT grid – let’s C what we’ve got: 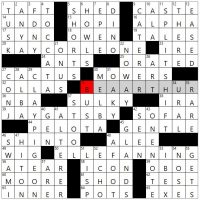 Each of the theme entries starts with a name that sounds like a letter of the English alphabet: K, B, J, L. I’m not sure if there’s more to the theme or if we’re supposed to spell something out from here, but fine enough for a Monday as is. I was pleased that three of the four themers were women, and it was interesting to have a 2/2 split between fictional characters and real-life actors. Also, my gayness wouldn’t allow me to comment on this puzzle without referencing the enormous impact that BEA ARTHUR has had on me and so many other gay people through her leading role in “The Golden Girls.” Thank you for being a friend, Bea!

Other thoughts:
– I almost didn’t finish because I’m not familiar with “The Godfather” and almost couldn’t grok the TOCCATA / KAY CORLEONE crossing. I can see ANYA being a tough crossing for a few folks up there, too.
– I was so glad that HIT ON was clued via finding a solution rather than in terms of hitting on someone. I always find that iteration creepy.

Another debut puzzle. This time, our newest constructor appears to be a relation of veteran grid-wrangler Zhouqin Burnikel. Congratulations, Constance!

Our theme today is a simple one, but filled with fun and lively entries. Each theme answer ends with a method of “getting around.” 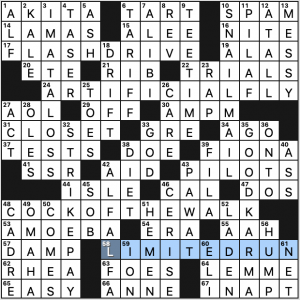 And the fill is funner still: “I’M AT A LOSS,” GOOD KARMA, STRIKE PAY, SNAIL MAIL, TEE TIME, and ALFALFA are all great entries. I like timely TARIFF and colorful CERISE as well.

I could really do without SSR (and its kin, SST). It especially seems to be out of place in a Monday grid when new solvers might have no idea what it’s referring to (Soviet Socialist Republic).

The only other hang-up was putting in LET ME at 64a [“I wanna have a turn!”], but I guess the “wanna” is telegraphing that the correct answer should be LEMME. Subtle, but unmistakable hint there.

Very nice grid. This was a smooth and fun-filled start to the week. 3.8 stars.

THEME: SHAM appears in each theme answer, hinted at by DEEPFAKE 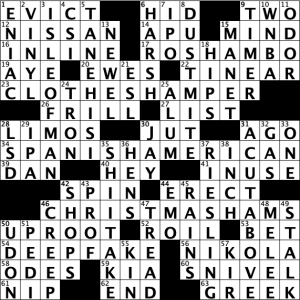 A good idea for a puzzle, even if the theme is a bit depressing, as everything DEEPFAKE related is increasing horrifying. Hiding SHAM in each theme answer works for the purposes of the theme.

Some nice fill here, much of which was more fun than the theme answers. Favorites were ROSHAMBO, A CUT ABOVE, DUST MITE, ISLE OF MAN, SNIVEL, RIESLING, TA-NEHISI and SHIITAKE

Overall the puzzle is pretty smooth. I did feel like there were a few places where I was getting stuck, but looking back after solving there’s nowhere that has any particularly difficult areas.

This offering from Anna Shechtman is very much in keeping with the trend of more-challenging Monday puzzles. The long entries were splendid (GIRLS WHO CODE and APEROL SPRITZ), and there were a few standout entries scattered across the grid. Unfortunately, the overall effect of those beautiful marquee entries was somewhat marred by a smattering of fill that didn’t meet the standard we’ve come to expect from New Yorker puzzles. The cluing was also much heavier on trivia and lighter on wordplay than I’d prefer, so this ended up being one of the less enjoyable New Yorker themelesses. 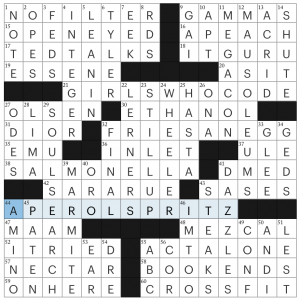 Overall, not my favorite NYer I’ve solved recently, but there were definitely some shining moments!

This one ran the gamut of very easy to distractingly difficult for me. Started with a confident bang in the northwest, but that fizzled in the northeast. The southwest was another head-scratcher.

A lot of this felt unnecessarily difficult. Not sure if that great trip-stack in the middle was enough to keep it entirely enjoyable.