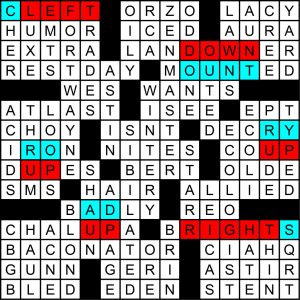 Title: “Follow the Directions! (2)”
Prompt: The meta for this puzzle is a famous song.
Answer: “(Take Me Home,) Country Roads” by John Denver

Twinge of painful regret when I saw the title, since the original “Follow the Directions!” in July ruined my perfect year (and I would’ve had it with about 15 minutes longer to solve…but it’s been months, so how could I still be bitter about it? Right?).

Was worried that this might be round 2 of pain, but no: this one is much easier than its (lovely) predecessor, and it fell right away for me. 280 correct solves with a half-hour to deadline, though, so it looks like it played toughish on solvers overall.

Had one mistake in the grid, in box 10, where 10a. [Like some lingerie] had to be (?) RACY with the ?ACY I had. The down I’d never heard of 10d. [“The Hissing of Summer ___” (Joni Mitchell album)] but RAWNS sounds like the last name of someone named Summer who was hissing for some reason. Seems silly now, but there are some extremely silly album titles out there, so I shrugged and went on. But it was LACY and LAWNS, so not a person but actual lawns hissing with summer heat. Fortunately this error didn’t affect my meta solve.

Noticed quickly that LEFT was most of 1a. [Like some chins], CLEFT and then I saw DOWN hidden in 18a. [Squire, in Britain], LANDOWNER. Lower in the grid we had a trio of UPs in COUP, DUPES, and CHALUPA, and then a RIGHT in BRIGHTS.

Going in the relevant direction from those six entries we extract the following:

String those together and you’ve got the Appalachian anthem “Take Me Home, Country Roads” by John Denver (which is sometimes also just known as “Country Roads” — but as lyric or title it doesn’t matter, click is 100% either way).

59a. [Wendy’s sandwich with a name that makes it sound like a weapon], the BACONATOR. Which anagrams to a city in Florida. If anyone orders one from a Wendy’s there, please tweet.

42d. [White on a board], SHAUN. Ack, I got tricked. I consider these masked capital letter clues something of a specialty of mine but this one nailed me. I had S?AUN before I finally got it.