Good news! The second volume of Queer Qrosswords, the brainchild of Nate Cardin, is now available! Simply make a donation of $10 or more to the LGBTQ+ org of your choice and forward your emailed receipt to QQ. The set of 32 puzzles can be sent in .pdf or .puz format, whichever suits you. The first volume of Queer Qrosswords was terrific, with themes, fill, and clues that make puzzledom feel like home for queer solvers and their allies.

Our own, and I guess the NYT’s own, Andy Kravis brings us today’s zippy grid. There’s plenty of fun fill in here as well as a few things that were challenging (in a good way). 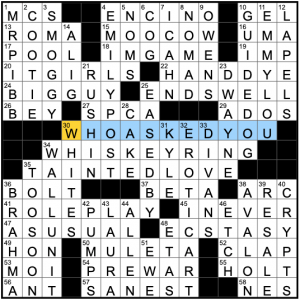 I could do without ICAHN [Billionaire who lent his name to a stadium on New York’s Randalls Island] as that’s not a name I would ever know or need to know. But the other new-to-me terms (WHISKEY RING and MULETA) are fair game, and I’m happy to learn them. However, apparently another meaning of MULETA is crutch, and when I do an image search, I mostly see pairs of crutches. Is this meaning lesser known? If not, I would prefer that definition to avoid issues surrounding bullfighting. 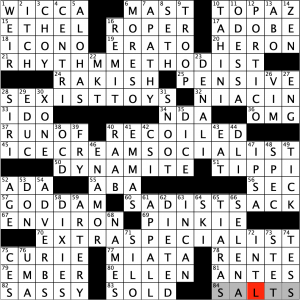 This puzzle is so good I’m not even sure where to start. The theme answers are so perfect. I solved ICE CREAM SOCIALIST first and thought that it couldn’t get better – until I got to every other answer. SADIST SACK! RHYTHM METHODIST! Are you kidding me? So. Effing. Good. These answers are what you get when you are not limited by a patriarchal and puritanical sense of what is allowed in a puzzle. Answers based on sex toys, sadism, and the rhythm method are all to uncommon – and this puzzle proves that embracing all parts of the human experience can open up opportunities for such great word play and themes.

I also happen to love 17×17 puzzles – sometimes I find 21xs to be tedious, and 15xs can go by to fast – but a 17x, so beautifully created like this puzzle – absolute perfection.

Outside of the theme, another Inkubator puzzle that shows how a focus on women can really go a long way in making a grid sparkle. I especially enjoyed seeing DYNAMITE clued for the phenomenal Maria Bamford’s Lady DYNAMITE – particularly on World Mental Health Day.

I don’t think I stopped smiling once while solving. And found myself saying “OMG YES!!” MORESO than I usual do. Even the recent ELLEN drama couldn’t make me love this puzzle less.

Some SELENA for you before I go.

What a gorgeous puzzle! The stacks are so good! The clues are tight and clever! The fill is so clean! Patrick Berry is a master craftsman who, despite having mastered the craft, continues to refine his puzzlemaking, and we get the benefit of solving excellent themelesses AND imagining Patrick Berry getting down to Rihanna’s 2010 hit RUDE BOY. 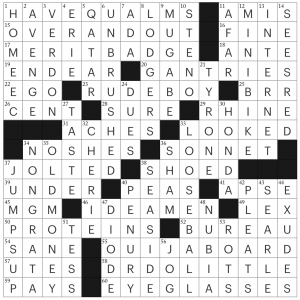 Let’s examine these elements individually, starting with those stacks. The NW has HAVE QUALMS over OVER AND OUT over MERIT BADGE. While HAVE QUALMS is slightly less sparkly for its somewhat inelegant verb-noun-phrase-ness, it is certainly a standalone phrase, and the Q makes it pop. OVER AND OUT is also just so fun– I almost wish the SE stack had ended on it, but it’s pretty fabulous where it is. The SE stack was also clean and crunchy (OUIJA BOARD/DR DOLITTLE/EYEGLASSES), with the J of OUIJA BOARD mirroring the high scrabble value of the aforementioned Q.

The clues, while trivia-heavy as is typical of New Yorker puzzles, also featured some delightful wordplay:

There were only a few entries I disliked: GANTRIES, SEARLE, and AMIS. I had never heard of a singular gantry, so plural GANTRIES was just not happening for me. This made the NE a challenge, as I had also never heard of Martin AMIS or his book. I assumed there must have been a member of Pink Floyd named Martin who had written Money… my bad.

Finally, never having actually read TESS of the D’Urbervilles, I was deeply confused by the clue about TESS of the… Durbeyfields? This clue sort of epitomizes the New Yorker puzzle for me. TESS of the D’Urbervilles is some quintessential crosswordese, but Patrick Berry took that clue and made it more literary, requiring either knowledge of the book itself or some solid inference from the sound of the name. I love that so much. Many stars from me.

THEME: Letter swap theme today with a T in each theme answers swapped to a V. 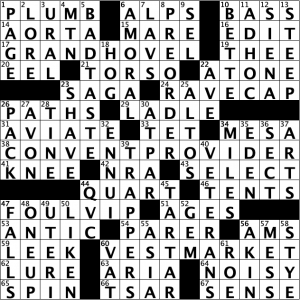 This is one of those puzzles that I enjoyed more while reviewing than I did while solving. The theme definitely works – and letter swaps always make for some wacky answers which are really fun here. I wasn’t sure why this group of answers was selected, as it does seem like there are many words where you can swap a T for a V and get another word, but overall a fun puzzle with enough consistency to hold the theme together.

I also liked the layout of this puzzle a lot. I felt I could really dig into each section, while still feeling like there was a really nice flow to it.

As far as fill goes, it felt almost clinical in way – like an exercise in crossword words. There wasn’t much in the fill that wowed me in terms of newness or excitement, but every answer was very legitimate with no unfair or ungettable answers. Was nice to see NRA clued for the New Deal org. rather than the terrorist one. 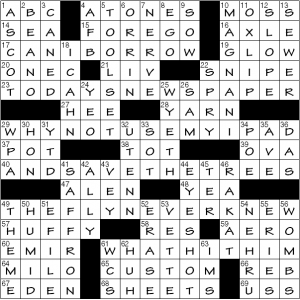 I have so many questions.

It’s a quote theme. Hop in.

All right, let’s start with the easiest part. Question: Why mother-daughter? Answer: Simply to provide a generational basis for the joke. That it’s mother-daughter rather than father-son, mother-son, father-daughter (let alone non-binary or agender) is probably just in the service of rebalancing the scales, as so much that we see is still tipped in favor of the masculine.

From here on it’s a bit trickier.

But first! A word against our sponsors. In general I’m not a fan of branded-items in crosswords, and perhaps even more so when it comes to the proliferation of iThings. Sure, they’re a great convenience for constructors so I can’t begrudge them overmuch, but I draw a deeper line when it comes to theme material.

Obviously the joke is that our little dipteran menace met his (gender rebalance again?) demise at the flat end of a tablet, as a ‘dead-tree’ newspaper was either not available or withheld. Beyond that, are we supposed to presume that the life of a tiny housefly is in any way equivalent (a one-to-one ratio) to however much wood, water, et cetera was required to produce the newspaper?

Further, using a newspaper to swat a fly isn’t going to do too much damage to the improvised weapon: maybe some creasing, at most a small tear, and a tiny stain very unlikely. The mother’s asking the daughter if she can borrow the newspaper—not go out and buy one—suggesting that it’s already present. Trees saved: 0.

Now, what about that iPad? It by contrast could very likely be damaged by the action of a swift whacking. And I daresay it takes more money, energy, and materials to manufacture a microtechnological device than a newspaper.

So, yeah, this whole thing didn’t work for me.

Looking at the rest of the puzzle now.

In sum, underwhelmed by the theme and while there was a lot of good stuff in the ballast fill, there was also (not mentioned) a fair amount of short, drossy entries (like YEO). So, so-so.

Sorry this is so late! Quickly:

The revealer tells us: 63a [Assistance, with “a” … and literal assistance in solving the four longest answers] and it’s LEG UP. Each theme answer has GEL going down, which is LEG  going, well, up. 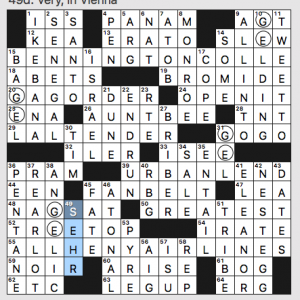 A fun theme overall, although I would have preferred it without the circles that identified each GE pair.

What I didn’t know before I did this puzzle: that Alan Arkin and Peter Dinklage went to BENNINGTON, and that SEHR means “very” in German.