The title indicates that something is probably going to be going backwards and that is certainly the case. Theme answers are phrases that end with a rental car company name written in reverse. This is revealed by 111a RENTAL CAR RETURN [Airport sign that inspired this puzzle’s theme]. 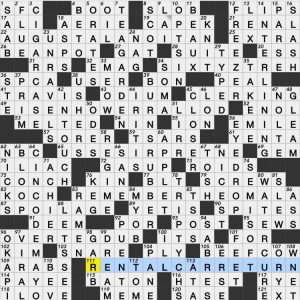 Not a bad theme, but it gives the gimmick away early on and from then on, it feels pretty straightforward. However, it’s pretty apropos for me as I’m visiting my daughter in St. Paul this weekend and am driving my Hertz rental car around. It’s interesting how most of the major car rental companies are regular words. Missing: Avis.

The long fill is mostly good as one would expect. Top hits include CINCO DE MAYO, BURNS RUBBER, TEA GARDEN, and TRIPTYCHS among others. But I found myself distracted by kludgy bits like LIRR, ENOL, EMAG, HTEST, and the like. Starting the grid off at 1a with SFC is not the most promising sign either. And I actually did Natick at CAPEK crossing LAI (COPEK crossing LOI sounded more feasible to my ear).

I’m afraid I’ll have to leave it there. The theme is solid, but it doesn’t provide long-lasting enjoyment, and some of the uglier fill takes away from the good bits therein. 3.4 stars. 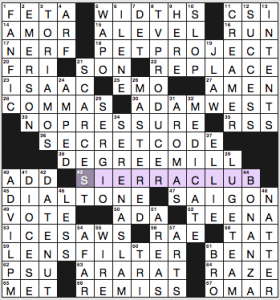 If you enjoyed this puzzle—as I did—you’ll want to check out the brand-new Queer Qrosswords fund-raising puzzle pack, which includes another crossword (“Themeless 2,” a 16×15) by this constructor. I haven’t done the QQ2 puzzle pack yet, but I’m looking forward to digging in!

Let me try that xword Bechdel test, comparing the tally of presumed straight white men in the grid to that of everyone else. ISAAC Funk, ADAM WEST, John RAE, Bill Gates in the SUCCESS clue, SERGIO Leone, –5. Fictional Miss SAIGON, tragically murdered Brandon TEENA, OMAR Bongo of Gabon, singer TORI AMOS, lesbian TV PRODUCER/creator ILENE Chaiken, actress J.LAW, the SERENA SLAM, generic ELLIE (would have been nice to clue this as an actual person), FRIday clued in relation to a Norse goddess of wisdom, +9. Andrew wins, +4. Thanks, Andrew! (Omitting Nabokov’s fictional ADA, as the book is apparently about an 11-year-old girl in a “sexual affair,” per Wikipedia, with her 14-year-old brother. Ada or Ardor: A Family Chronicle? Nabokov was messed up, man. If only this had been clued as the early computing pioneer, Ada Lovelace.) 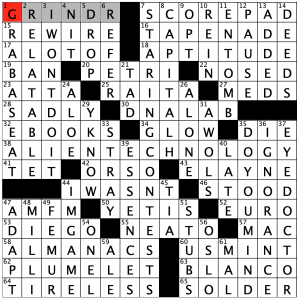 I have been saying that these LAT puzzles have been taking longer than normal, but this one took me longer because it is an Agard puzzle! Tons of great stuff in here, and there may or may not have been a new word or two to me. This is a 70-worder that seems to effortlessly mesh together by one of the true masters of our day. And yes, I noticed that the Washington Mystics just won the WNBA title this week, surely making one of their superfans (Erik!) extremely happy! But enough about sports: let’s discuss a great puzzle! 4.5 stars today.

I could go on, but there is sports on today! The Kona Ironman Triathlon is also today. This would be on my bucket list if I knew how to swim! 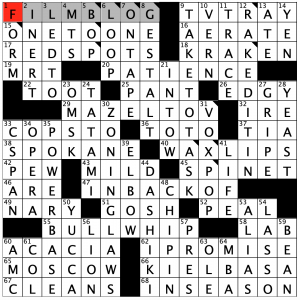 Erik has more than one puzzle in print that this blog covers today; he is half of the pseudonym “Garrett Estrada”; Brad Wilber is the other half. I am guessing at the time of 13 minutes because I was so mentally worn out after solving this that I forgot to stop the timer. Which begs the question: WHY DOESN’T THE TIMER IN MAC ACROSS LITE TURN STOP WHEN THE PUZZLE IS DONE??? Yes, it is a bit of a pet peeve with me; maybe I will just switch to using Black Ink going forward!

But I digress: there is a LOT I liked in this puzzle. Some of these clues seem very well thought out, and I was thoroughly fooled my more than one of them! This puzzle was also a lot of fun, and I would expect nothing less from these two prolific and talented constructors. 4.7 stars for this one.

Some of my favorite parts:

That is all! Have a great weekend!

A reminder that my beard is getting a bit scraggly.

THEME: The word CLOSE is being “shaved” with each theme answer.

One of those puzzles where the revealer is a head slapper. I assumed it had something to do with phrases starting with LO, so when I dropped those two letters in automatically at 42A, I got stuck for a few moments with a genuine “huh?”

Definitely fun to realize what was going on. Great revealer, and although the “shaving” doesn’t consistently come from the same side, that’s just fine. My shaving is rather haphazard.