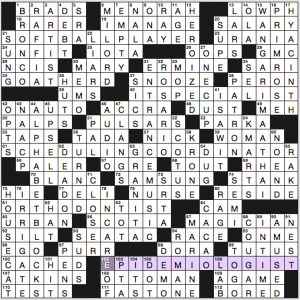 Apologies for the late posting, folks! I had a busy evening, between Pokémon Go, carbo-loading dinner at home to prepare my sweetie for tomorrow morning’s Chicago Marathon, and finally wrangling my son into watching the romantic comedy his mom and girlfriend have been wanting to see (Crazy Rich Asians, I cried numerous times, as well as laughing and also hollering at certain characters). So I poked away at Erik’s puzzle throughout the movie, multi-tasker that I am. The “Lines of Work” theme takes classic movie quotes and imagines what profession would espouse that line:

The theme itself gets 4.5 stars, because so much of it amused me, and I DUG (64d) the way Erik incorporated pop culture and his imagination.

Fave fill: WANGARI MAATHAI (I mostly had the first name! needed crossings for the last name), ENTRANCE MUSIC, UPSELL, ALPHABET BLOCKS, ROSARIO Dawson, HOUSE CAT (and that clue! 75d. [What goes in a box]), and the pretty pairing of the yellow PRIMROSE and purple HYACINTH.

Erik’s noted for his clever and original cluing. My pick for the best in this batch is 52d. [District 9, for short?], SCOTUS. A group of nine in the District of Columbia, the Supreme Court of the United States. Brilliant, Mr. Agard. (It helps if you’re familiar with the South African sci-fi movie District 9, and have that extra layer of mislead. Neill Blomkamp’s other filmed-in-RSA movie is Chappie, which I also recommend. Also, 50a PALPS? The creatures in District 9 have those. No, I’m not talking about Kavanaugh, don’t be silly.)

Worst fill: plural UMS, the SRA/SRTA overlap, -OLA. Terrific for a 21x puzzle to be so smoothly filled that this is all I find to grouse about.

I really liked this puzzle! The “switch” of the title is the on/off switch; each theme answer has them swapped. 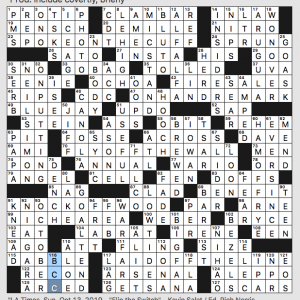 I didn’t realize until I wrote them down that the top half of the puzzle has ON in the theme answers and the bottom half has OFF. That elevates it from a good theme to a great theme. I love a feat of construction that’s also fun to solve.

What I didn’t know before I did this puzzle: that NONA Hendryx sang in Labelle. Here they are.

THEME: DING has been removed from 8 answers in the puzzle 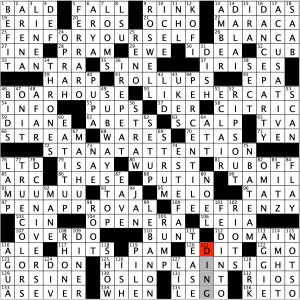 Another really great letter removal theme from the Universal – we detail this grid -removing all the DINGs and the result is a stellar puzzle. My favorite themers of the day were LIKE HER CATS and HI IN PLAIN SIGHT, but really all are excellent for the theme and every one of these clue/answer combos is entertaining and fun.

The fill in this puzzle also made for a really fun solve, which is not how I often feel about large puzzles. Had THEMYSCIRA before DC UNIVERSE for 78D, which cruelly have the same letter count, but appropriately GORDON Ramsay put me right. DANCE PARTY, TRUE COLORS, RIPS OUT, ESTEFAN also numbered among my favorites – but really fantastic work all around.

If I’m being nit-picky – it did feel like the word UP appeared a few too many times – but I’m not sure I would have noticed had it not been for MASH UP and EAT IT UP appearing right next to each other. Both are excellent answers, so I didn’t dwell too long on the repeat.

Only other minor thing – how can you have an Office clue for JAN [She dated Michael on “The Office”] and not PAM?!?

Best clue of the day is going to THRONES [Queens’ seats].

A couple of notes on parsing – I so appreciated 88A clued as PUT IN over PUTIN and I struggled with AS EVER – my brain just kept seeing A SEVER and did not understand that clue or how that could be thing with an article in front of it- I always find it funny how information gets processed and the parsing of words is one of those things that is infinitely entertaining to think about.

I was thrilled to see the BLANCA clued for the amazing MJ Rodriguez [Lead role in “Pose”]. I’m going to leave you with another example of the brilliance of MJ Rodriguez – here’s her rendition of Suddenly Seymour that has quickly become the best version of this song in existence.

After back-to-back curveballs from the WaPo, something right over the plate this week.

THEME: Familiar names are separated where the last half is “traded” with the first- clued wackily.

I was cruising right along while solving this puzzle, but I did get hung up on quite a few of the theme answers. Often, I’d get one half of the answer, and try to figure our the anagram for the second half (see note at bottom: I initially thought it was a simple anagram). I like it when puzzles work that way, so no complaints. I undoubtably would’ve been a solid few minutes faster were ORMAN, LESSING, LANDIS, and BY GUM in my vocab. My mind drew a blank on MESSINA too.

I didn’t notice that this was anything less than an anagram theme until I came to ABBA [Band whose letters describe the pattern of this puzzle’s theme entries]. That may help explain some of the more obscure choices in the themers.

THEME: UN- is added to the familiar phrases- clued wackily.

Three solid themers is sometimes all you need. The result is a clean grid and an enjoyable solve. I’m sure there are a ton of other possible entries out there, but I appreciate that they weren’t crammed in just to get more material in a tight space.

Still, I stumbled (badly) in one area. For 21D [Suppressed] I entered SATED, assuming that each theme would start with UN. Then for 35D [“Beat it!”] I entered SCAT. Then I just stared at the grid for about a minute before fixing it. I think that added 1:30 or so to my time. Doh!