I didn’t figure out the theme until I hit the revealer. Then again, I didn’t try very hard.

The theme answers are all straightforward. 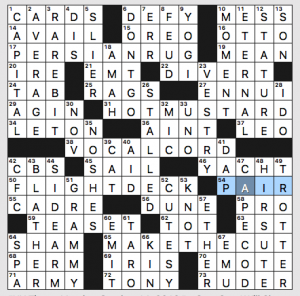 What I didn’t know before I did this puzzle: that a KNOT is one nautical mile per hour. 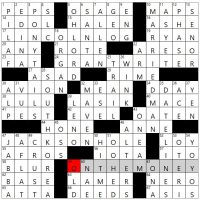 Each of the men in the first three theme answers is on the denomination listed in the clue, such that they are each literally ON THE MONEY. Cute. My small issue with this theme is that the Lincoln in LINCOLN LOG refers to the same man who is on the $5, whereas the grant and Jackson in the other two themers are not the same as the men who appear on those bills. Also, Lincoln and Jackson are proper nouns in the theme answers, but grant isn’t. They’re inconsistencies that bothered me a bit while I solved.

For me, this puzzle was sadly also not “exactly right” for three reasons:
– It feels outdated. Very outdated. When the most recent pop culture reference is RYAN Gosling … but then Eddie Van HALEN, Lance ITO, Cheri OTERI, and Jay LENO, one has to wonder whether this puzzle was written a few decades ago and just used now for some reason with an updated RYAN clue. If that’s not the case, I’m not sure how a puzzle that feels like it’s right out of the 90s gets published today, or how publishing a puzzle like this in 2019 inspires newer constructors to feel like they can have a space/voice.
– The grid also includes super problematic (to be polite) Woody ALLEN (when any other Allen could have been chosen) and includes the term LAMER (which has been known to be a hurtful term for years).
– The male:female ratio in this grid/clues is about 17:6 and felt even wider than that with entries like MARRIED MAN.

It was a quick solve but, unfortunately, it wasn’t up my alley. :/

THEME: Each word of the theme answers can also be the OPENing of the word HOUSE 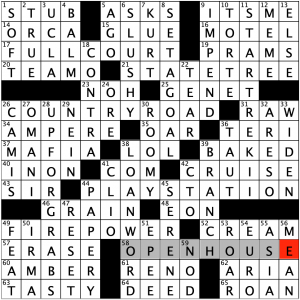 This is a great easy puzzle. The theme is really clean and every answer is legitimate. I loved the range of the answers from governmental things like COURT HOUSE and STATE HOUSE to entertainment with FULL HOUSE and ROAD HOUSE to the fun with TREE HOUSE.

Great bonus fill here as well – LOANWORD and UP FOR GRABS were my favorites today but really clean fill all around. I also loved the pair of palindrome clues with the clue DEED [Palindromic title] matching the one for LOL [Palindromic text]. Best clue of the day goes to EURO [Bread for a Bologna sandwich?].

The title is a play on the phrase “Food for Thought” (which also happens to be the title of an excellent crossword puzzle book by Erik Agard with themes centered around, you guessed it, food). The theme answers are food items in two words with initial letters of P and S (the abbr. for postscript). 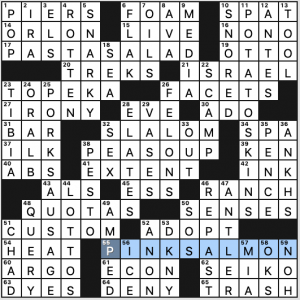 Simple but elegant theme for a Monday morning, yeah? I didn’t know PINK SALMON was a separate species of its own, but it checks out. I wonder if Zhouqin considered PESTO SAUCE as a theme answer.

Zhouqin is one of our all-around superb constructors who can deliver an easy breezy Monday grid like this as well as puzzles with a bit more meat on them. We should count ourselves lucky to have her!

In this grid, she decided to place her theme answers in pinwheel fashion. I wonder why because five theme answers is certainly not too many to put all of them in the Across direction. The only reasoning I can think of is that the particular way the letters landed when laying them out in the traditional way must have resulted in too much sub-par fill.

The upshot is that the theme answers take up all the marquee positions, even in the Down direction so that leaves precious little room for the kind of sparkly fill we all like. As a consequence, we have to be satisfied with a bunch of 6-letter entries like TOPEKA, SNARKY, ISRAEL, SLALOM, FELONS, QUOTAS, etc. Solid stuff, sure, but nothing to write home about. One of Zhouqin’s trademarks, at least in my view, is the prevalence of long, colloquial phrases in the fill. Sadly, none of that is present in this grid.

I noted these two clues as my favorite:

Solid grid with a nice Monday theme. The fill isn’t as sparkly as most of ZB’s puzzles, but it’s clean and light. 3.6 stars.

I learned a lot on this one! I found the puzzle substantially more challenging than previous New Yorker Mondays, and although there was a LOT of trivia/proper names that I didn’t know, most of them had totally fair crosses. I do have a few (relatively minor) issues with the puzzle, but overall the solve was an enjoyable struggle. 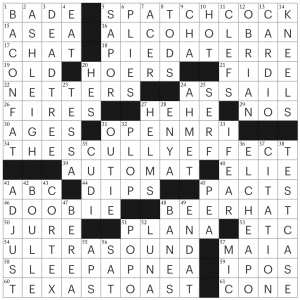 Part of the challenge of this puzzle is that it’s essentially four stacks, with the shorter stacks in the NW and SE and longer ones in the NE and SW. When you have that many stacks in a gird, you’re bound to have some fill issues, especially with wide-open corners like the NE and SW. I reallllly struggled with the NE, never having heard of SPATCHCOCK or TODS or PIED À TERRE (per my high school French, this is roughly “foot on the ground?).

The other stacks were better for me, and I particularly enjoyed the clues in the SW: “Baby monitor?” for ULTRASOUND and “Free pass at Woodstock?” for DOOBIE were both clever, and “Cause of certain nocturnal emissions” is both a gross hilarious clue for SLEEP APNEA. I had never heard of BOULLE, and when you google BOULLE you mostly get pictures of gilded furniture, but his works are well known and the entry is totally fair.

Anyways, all told, I enjoyed struggling with this puzzle, despite the few sticky spots.

Similar to last week, I flew through one half and got stuck in the other. The more difficult side being the east for me this time.

Seemed there were a number of entries that barely passed the smell test for me this week. Those included:

Looks like I had a lot to gripe about, but I enjoyed it overall. Always a great feeling when Mr. Happy Pencil shows up after a BEQ Themeless.