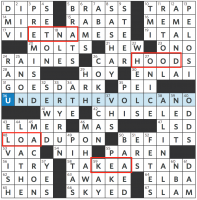 That central long themer is the giveaway that the names of four volcanoes are hidden in the other four themers:

VIETNAMESE == Mt. Etna, in Sicily, which last erupted … last year
CAR HOODS == Mt. Hood, in Oregon, which last erupted about a century ago
LOAD UP ON == Mauna Loa on the island of Hawaii, which last erupted in 1984, is the largest volcano on Earth, and very common crossword grid fill
TAKE A STAND == Mauna Kea is Mauna Loa’s neighbor and dormant. There are several astronomical observatories on the summit of Mauna Kea and further development has been opposed by Native Hawaiians, to whom the mountain is sacred. 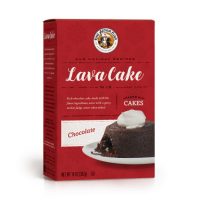 I just made this a few weeks ago

If you look under each volcano, you’ll find these letters:

Or, MOLTEN LAVA CAKE, which is a particularly delicious food, being in its most common form an individual chocolate cake which is under-baked so that a “lava flow” of chocolate sauce flows out from the center, covering your vanilla ice cream on the side. This was lovely and fun and made me hungry, thank you Matt!

My friend Amanda walked down the aisle to [12d: Boston’s only #1 hit].