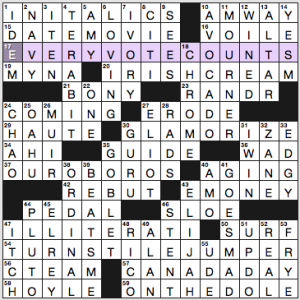 Plenty of good stuff in this 70-worder, along with a bit of clunky interstitial fill to hold it all together. The highlights include IN ITALICS (with the tricky clue, [Set off, say]—could mean emphasize(d), start(ed) out, trigger(ed)), DATE MOVIE, EVERY VOTE COUNTS (be sure to check your registration status well in advance of election day—in a number of states, they’ve been purging voter rolls and sometimes “mistakenly” trying to purge tens of thousands of active voters), IRISH CREAM liqueur, OUROBOROS, the new-to-me ILLITERATI, a big-city TURNSTILE JUMPER, CANADA DAY, ON THE DOLE, BEATS ME, and AVOCADO (I learned from the constructor’s notes at Wordplay, his original clue was “[Its name comes from the Aztec word for testicle] — so evocative, and once you know it, you can’t un-know it”).

I could’ve done without fill like IDEM, I-TEN (nobody spells out interstate numbers!), and crosswordese place name Ulan-UDE, along with the aforementioned E-MONEY. Was gonna include R AND R, but can you believe Merriam-Webster lists that as the entry, not R&R? They also list R and B! Sorry, M-W, but we all call it R&B and you know it. 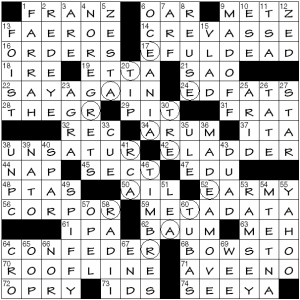 The tacit reveal here would be RATE HIKE, but it’s nowhere to be seen.¹ We do, however, have four 15-letter, grid-spanning themers. They just happen not to be completely horizontal as one would expect. Instead the letters R-A-T-E diagonally link two unintelligible partials.

This is kind of a standard visual theme, done rather well. All four as spanners is a great touch. Save for the first, they all (a) consist of two words in which (b) the RATE tetragram occurs at the end of a (the first) word; not so with THE GRATEFUL DEAD.

Let’s have a desultory look at the rest of the crossword.

Good puzzle but I wish the theme had been a little more consistent, tighter.

¹But see 38-down in yesterday’s Universal by Alan Massengill

A couple shiny long entries and some fun short stuff kept this puzzle interesting and engaging, but the highly segmented grid design and some difficult crosses made this New Yorker puzzle feel a bit rockier than usual. The segmentation particularly in the NW (MONOPOLY/UNIVERSE/MINARETS) and SE (OPEN LATE/LIVE A LIE/EXIT WEST), where there was only one square in or out, made those corners play basically like their own mini-puzzzles (but look at those lovely little stacks!). The other two corners were only slightly more open, and the middle also felt isolated from the rest of the puzzle. The chunkiness of the puzzle doesn’t lessen its quality, but did up the difficulty a notch for me. 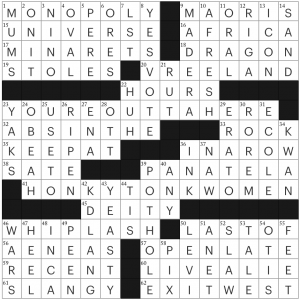 The marquee entries through the middle (YOU’RE OUTTA HERE and HONKY TONK WOMEN) were fun, although I confess that I didn’t know how to fill in HONKY TONK __EN. At one I point definitely had HONKY TONK helen (??) in there; that section was extra tough because I’d never heard of a PANATELA or Ned ROREM, and NAW could just as easily have been NAh. 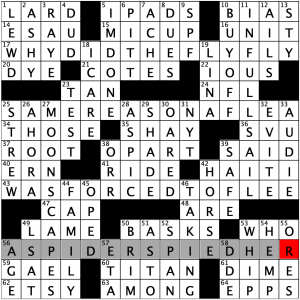 This puzzle was just not on my wavelength – I did not get this quip easily, which made getting through it a bit of a slog for me. I was impressed that the quip fit so well in the grid – but not enough for me to really enjoy this.

I did enjoy some of the fill – MOONSCAPES, BUY OFF, and I’M DONE are all great – and the clue for SPF [Cover letters?] is one of my favorite clues for that answer ever. I also got a kick out of ORR, OARED, and ORES all appearing here.

This was a nice straightforward puzzle to do before I head off to work. Each theme answer has an “S” added with amusing results. 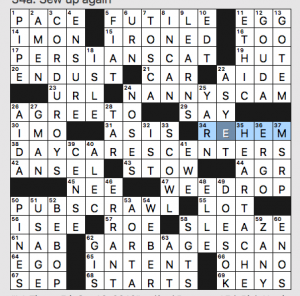 The theme is solid, consistent, and at least somewhat amusing. I prefer a crunchier puzzle on Fridays, even in the LAT, and I can acknowledge a good example of the alternative, which this is.

What I didn’t know before I did this puzzle: that MADERA is the Spanish word for “lumber.”

I leave you with the earworm I acquired from 35d. Sorry (not sorry).