40a is HI-DEF, or rather, HIDE F [TV type, and, read differently, what you do four times in this puzzle]. Four theme entries are missing their leading F. 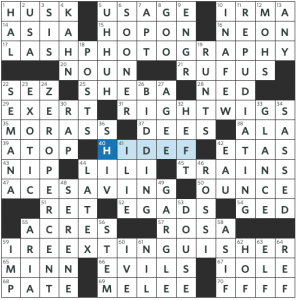 There was a lot that irked me about this. For one, the Fs aren’t hiding; they’re missing. Actually, they were just moved to 70a FFFF [Ultraloud in music, and what’s missing from four answers]. Second, you don’t do the hiding as the clue for 40a says. I’d say the constructor did the hiding (if you can believe any was done at all). Third, the theme entries just felt tired and uninspired. ACE SAVING? That’s just awkward. I’ve never heard of “fright wigs,” but I guess they’re a thing. Still, RIGHT WIGS is so uninteresting. And no one uses “ire” in everyday language, so IRE EXTINGUISHER feels forced to me.

It would be so much more interesting if the f-deprived words were unexpected; I’m thinking of something like BEEFEATER becoming BEE EATER (the bird) or SUBWOOFER becoming SUB WOOER. Even RANK SINATRA has some potential for humor.

Beyond the theme we get two gerunds (REPUDIATING and BIDDING) and a financial term (ZERO PERCENT) as our marquee long fill…that is to say, nothing with any zing. And then there’s ILIE, MOHS, AGEE, and especially IOLE [Woman loved by Heracles] crossing HOF [Cooperstown inst.], which is standing in for Hall Of Fame, though I’ve never seen it abbreviated before. Meh.

The brightest moment was the clue for 49d [Scope things out?] which is answered with GARGLE. Now that’s a fun entry and clue. I wish there was more of that in the rest of the grid.

This one didn’t work for me, but tomorrow’s another day. 2.8 stars. 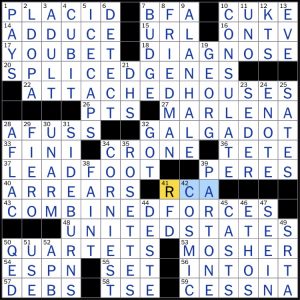 First off: due to some sort of error, the puzzle on the app today appeared in print on 9/26, so the one from then by Doug Petersen is (supposedly) appearing in print today.  If you want to read about that grid, go here.

Today’s entry from Randolph Ross is fine, I suppose, but it lacks a certain freshness, especially from the NYT on a Thursday:

Two items of a set where the last letter of the first is the first letter of the latter (Genes WILDER and RAYBURN, HACIENDA and ADOBE houses, MILITIA and ARMY forces, and UTAH and HAWAII).  I don’t love SPLICED GENES here, since it breaks the pattern.  ATTACHED, COMBINED, and UNITED could appear in the same section of the thesaurus; SPLICED suggests an interweaving.

Outside of this, the rest of the fill/cluing is kind of stale.  There are a few nods to more modern pop culture (GAL GADOT, the BBC America series Killing EVE), but that’s balanced out with entries like MARLENA, clued with a character who had a 40-year run on “Days of Our Lives”.  I wasn’t a fan of ON TV (“Where ‘Star Trek’ and ‘Mission Impossible’ originated”), and E-NOTE (“Cybermemo”) is an E-NO.  I wasn’t INTO IT at all.

Fun fact: I recently visited Terre Haute, IN, where I went to college, for Homecoming.  It’s currently playing up its heritage as the place where the curved Coke bottle was first made, but it’s also where Eugene V. DEBS, frequent Socialist candidate for President, called home.

On the not-so-frequent occasions that I construct a puzzle, my instinct is to find as many themers as I can and cram them into a puzzle. Alan Massengill’s puzzle, as well Mark McClain’s puzzle from a few days ago, is a reminder that three solid themers can make for a delightful grid. Looks like a crossword debut for Mr. Massengill also. Congrats on a great one!

THEME: Careers reimagined as if they are also involved in tech support, ala Best Buy’s Geek Squad.

Plenty to like in the fill including WAR CRY, AFTER YOU, OLD PAL, RATE HIKE, and TREBEK (for whom we’re all rooting).

Coulda done without the NAME TO / ANSWER TO dupe of sorts.

Toughest part of grid for me was seeing M AND M. Not like it’s an uncommon answer in a crossword, but my brain this morning could only see MAN?M, and I thought perchance it was some obscure, foreign, luxury candy that has evaded me all these years.

Thanks, Alan! Great way to start the day.

I was surprised to look at the time and realize it was under ten minutes. I could have sworn it was way over. I felt like I spent a lot of time wandering around the grid plunking in random answers even once I understood the theme – and that didn’t happen until I filled in the revealer near the bottom of the puzzle.

The revealer is 64a [Black comedy … or where the writers responsible for the songs in this puzzle need to go?]. The “Black” in the clue refers to Jack Black, and the answer is SCHOOL OF ROCK. Each of the theme answers has a grammatical error in the title. 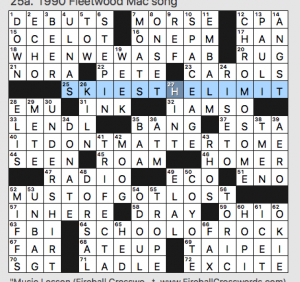 Once I unraveled it, I really liked this theme. The revealer has the added trick of hiding the upper-case letter in the first word, making it a bit more misleading and more Fireball-worthy.

What I didn’t know before I did this puzzle: that Wolfgang PAULI first suggested the existence of the neutrino. He discussed that hypothesis in 1930. Direct evidence for the neutrino was first reported in 2000. 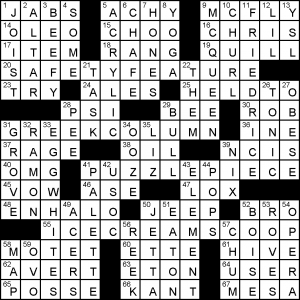 In today’s theme, four rough synonyms for “newspaper article” – FEATURE, COLUMN, PIECE, and… SCOOP? – occur as the second word of phrases used in an unrelated sense. The meaning of the phrases are changed to be descriptions of imagined articles. It is a clever and narrowly-defined theme. I’m not sure I’ve encountered SCOOP used in this precise sense before, but it’s not a huge leap of meaning.

Was I the only one who found the tiny corner at the end of ICECREAM… nigh impossible to break into. I eventually tried HIVE for [Honey haven], but that still seems weird as a clue, and things finally broke down. [Cubs spring training city] was as unhelpful to me as a MESA clue could be. I tried GARY at first as the only nearby short-named town I could name.

Worth noting: [“12 Years a Slave” director Steve], MCQUEEN is a different person to the actor.