More fun with famous last names—that is, if you thought yesterday’s NYT theme was fun. In today’s version, Paul is linking actors’ last names to specific roles they played in specific films. 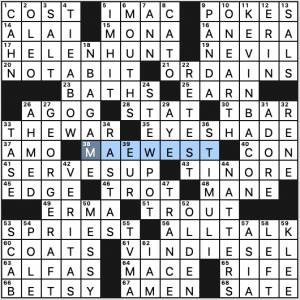 I thought the theme was fine. It didn’t get me too excited, as I thought some of the connections were a bit of a stretch, and it’s unfortunate that it arrived a day after another last-name theme. But I do like the actor/role angle.

On to more important matters. If you doubt the veracity of Six Degrees of KEVIN BACON, let’s see how it works with this group.

As you can see, each of our actors has a Bacon number of only 2 (the lower the Bacon number, the stronger the connection), even Raft and West if you can believe it. Try it online here.

Back to the puzzle. Highlights in the fill include ALL TALK, EYESHADE, and “NOT A BIT.” I wanted ON EARTH to be UNEARTH though that would cause POKES to be PUKES which doesn’t really pass the breakfast test. TIE A BOW, STIMULI, STEW POT, NBA GAME, SPRIEST, and VERITAS are more workmanlike than sparkly. 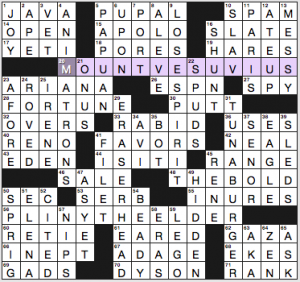 The theme is a blend between historical trivia and a quote theme:

I knew the phrase, didn’t know its origins.

Not sure how “in the language” a thing a TUNA BURGER is, and I’d never seen the noun ANIMATRONS before (now envisioning an “animatron of honor” at a wedding).

Susan Gelfand’s Universal crossword, “If I Wrote the Thesaurus”—Rebecca’s review 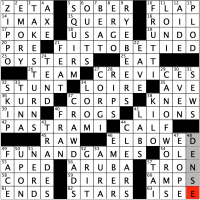 This is a great theme that had me genuinely excited to go around the grid looking for and solving the entries. I don’t always love the mix of across and down theme answers, but here it worked to keep the puzzle moving in a way that allowed me to really enjoy getting to each of the above answers.

This layout also allowed for a lot of entertaining fill with answers like ZIPPO, SQUIRM, RYE BEERS, CREVICES, and CORGI keeping me constantly interested. We also had quite an interesting feast to EAT in this puzzle, with OYSTERS, CRAWDADS, and PASTRAMI.

Favorite clues of the day go to SEW [What a Singer does best] and KILO [DEA bust unit]. Fell into both of those misdirection traps and loved figuring them out. I love when a constructor can energize the short words in a grid by using clues – and both of these took common answers and made them so much more. 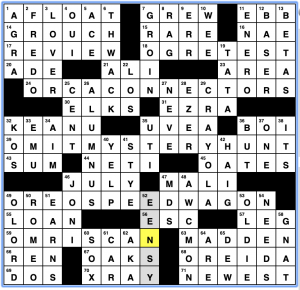 It’s an AVCX from editor Ben Tausig today, with guest editing from Francis Heaney, a fun switcheroo from last week’s puzzle/editor.  This one’s called “Love + Letters” and that title does a pretty good job of spelling out what’s going on with the theme on this 2/5 difficulty puzzle:

An “O” in tennis is love, and place it next to some otherwise normal phrases (GRE TEST, RCA CONNECTORS, MIT MYSTERY HUNT, REO SPEEDWAGON, and MRI SCAN) and you get wacky things.

Ace of Base’s “The Sign” was released in 1993, which was 26 years ago, which means it’s probably an OLDIE now! How do the 90s constantly feel like they were only 10 years ago, y’all?

Some other fill notes: 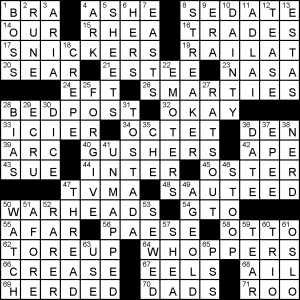 I’m guessing this is an early Halloween theme of sorts. The entries are a list of “candy” that ends in ‘S’ and is clued to be associated with a profession: SNICKERS (comedian), SMARTIES (teacher), GUSHERS (oil tycoon), WARHEADS (submarine pilot) and WHOPPERS (fisher). I don’t know a heck of a lot about these products as they are mostly sold here as imports if at all.