I definitely needed the revealer to make sense of what was going on here, but once uncovered, the a-ha moment was quick to follow. My first thought on finding PITCH A TENT (56a, [Prepare for a night out, and an explanation of this puzzle’s theme]) was that TENT might be turned upwards from the theme entries. But that was quickly disproven, and I realized that “pitch” was being used as a synonym for “remove.” 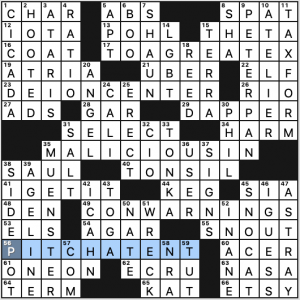 This was a good little workout that kept me in the dark just long enough, and I enjoyed it despite my issues with some of the clues.

In the fill, I like PETER PAN (with the great clue [Darling friend]), MUENSTER (with the utterly unhelpful clue [Its rind is colored with annatto], CICADA (one of my favorite insects), “I GUESS,” and “I GET IT.” SIDE POT [Optional poker bet] is not familiar to me (I’ve always heard “side bet”). 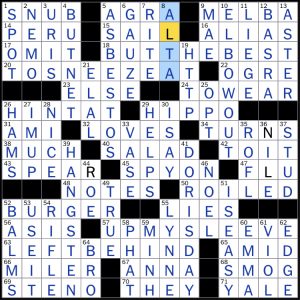 There’s a whole lot of nothing going on in this Thursday’s NYT from Matt Ginsberg.  Specifically, all of the theme clues refer to clue 72A, which doesn’t exist.  With that in mind:

Again, it’s all about nothing here: NOTHING BUT THE BEST, NOTHING TO SNEEZE AT, etc.  I appreciate the density of the theme here, but as a whole it’s just okay.

Given the theme density here, the fill here isn’t too bad, but it’s nothing to write home about.  I did like all of the longer fill – ASBESTOS, ELBOW OUT, HANGS TEN, and DORIS DAY, who’s clued with one of my favorites within her filmography, Calamity Jane.  I also learned that the HIPPO is the closest living land relative of the whale!

This is the hardest Fireball themeless we’ve had in quite some time. My struggles were partly due to unfamiliarity with a couple of long entries and partly due to the cluing. 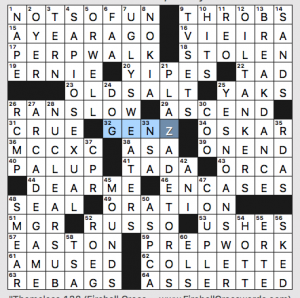 What I didn’t know before I did this puzzle: see above re: SAPIOSEXUALS (although I think I am one) and PLAZA DEL TOROS. I also did not know that ORWELL coined the term “cold war,” and I’d never heard of Klondike Kat, an animated member of the RCMP. The only animated Mountie I know is Dudley Doright. 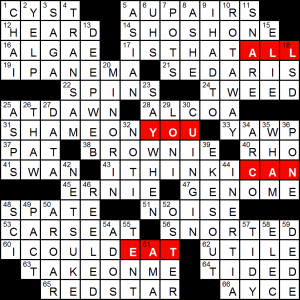 This puzzle has a couple of layers to its theme, though truth tell I don’t quite understand how they interact. First AYCE is an acronym I’ve never seen, but could easily infer. The words ALL/YOU/CAN/EAT are spelt out in four across phrases. Furthermore, all four entries are idiomatic spoken phrases. ICOULDEAT feels the least familiar, but I have encountered it in a Weird Al Yankovic song. Spoken phrases often add a level of zest to a puzzle, although they can be tricky to parse. I’ll take that aspect for what it is and not try to force it to work with the ALL/YOU/CAN/EAT part. 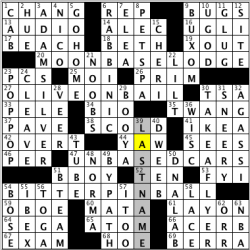 Good afternoon, everyone! For the moment (and by moment, I mean today), I’ll be here delivering reviews of BEQ’s Thursday crossword offering. Today’s grid is a timely one, given that this week marked the beginning of the new professional basketball (a.k.a. “hoops”) season in North America. (Don’t forget that the defending champions currently reside north of the border, the Toronto Raptors.) With that as the backdrop, the four longest theme entries are puns created by adding the letters NBA, which also appears as a stand-alone entry to reveal the gimmick (63D: [League added to this puzzle theme’s answers]).

Though not officially part of the theme (at least in my opinion), we also have the league’s head honcho in ADAM SILVER (3D: [Commissioner of the 63-Down]). In case Lil B The Based God wasn’t enough to whet your hip hop appetite, we also have U-GOD from the legendary rap group mentioned in the clue (10D: [Wu-Tang Clan member born Lamont Hawkins]). This B-BOY definitely loved the hip hop tinge to this grid (51A: [Old-school hip hop fan]). Loved the fill of TAKE A FLYER, which now makes me want to look up the origin of the phrasing after I’m done here (30D: [Gamble on something]). Probably favorite clue/entry pairing was BEACH, with the clue referring to sand castles (17A: [Castle’s location]). I’m sure those of you with furry friends know about a PET SPA, but I’m pretty sure that I have yet to come across one before (8D: [Where Rex gets pampered]). Though AGASSI (32D: [Last American male to win the French Open]) is referred to as the last American man to win the French Open in singles, there’s also another entry in the grid that could have accurately been clued as an American winning a men’s singles champion at Roland Garros, as Michael CHANG won his one and only major at the French Open back in 1989 (1A: [Thai lager]).  It’s not time for me to GO HOME (5D: [“Get outta here, you’re drunk!”]) yet, but I definitely have to skedaddle very shortly. But before I go, there’s this…

“Sports will make you smarter” moment of the day: HUE (2D: [Coloration]) – There have not been many African Americans who have ascended to the role of head coach in the National Football League, so it’s time to highlight one of those who have, former Oakland Raiders and Cleveland Browns head coach Hue Jackson. Jackson served as mostly a position coach and offensive coordinator in the NFL before he git his first head coach job with the Oakland Raiders in 2011, leading the team to an 8-8 record in his one and only season with the Silver and Black. Jackson soon became offensive coordinator for the Cincinnati Bengals, who soon became one of the best offenses in the league. His time in Cincy led him to be named head coach of the Cleveland Browns in 2016, where his teams struggled; In two-plus seasons in Cleveland, the Browns went 3-36-1.

Hope you all did not mind the review and I’ll (probably) see you next week on this space as well! Have a good rest of your Thursday!