Whew! That was a workout! The theme took some time to wrestle into place, but once it fell, it stayed down. However, the cluing throughout the grid required a late-week mind-set. I’m not complaining; I enjoyed the challenge, but it was unexpected in a 21x-sized grid.

The theme goes like this: In the grid we see a series of circles in the vertical direction. After some time, you notice that certain circled vertical entries are paired off: an upper entry is paired with a lower entry, one column to the left. The upper entries are words that can precede the word “lane.” They are clued straight (though you have to mentally add the “lane”) but they all end in a bizarre “[blin…“. The lower entries start with a “…ker]” signifying that we’ve “changed lanes” to the left. Further, the lower entries are words that can follow the upper entries to answer the clue.

Whoo-ee! You got all that? It’s much easier to see in the grid than to explain, but here are the theme entries. 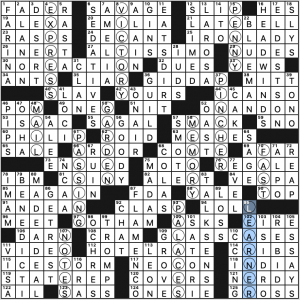 Pretty wild, huh? I’m not so sure about how the “blinker” is implemented; it feels pretty clunky. But I can’t think of any other way to do it, either.

This is incredibly complex, and I can’t even begin to fathom trying to tackle the construction of it. The most astonishing thing to me is that all the entries are completely symmetrical. For example, we have an upper “lane” entry like EXPRESS in symmetry with a lower entry like LEARNER. And EXPRESS‘s actual partner MAIL is in symmetry with LEARNER‘s partner FAST. And this symmetrical pairing has to be done with both words in each of six entries. Huh-wha?! I’m having trouble comprehending the serendipity (or just plain hard work) needed to get all the pieces to play together nicely!

Making a grid to fit all that seems nigh impossible. But then Blake still fits a boatload of long interesting fill in the grid: LATE BELL, IRON LADY, ALTISSIMO, NO REACTION, “I CAN SO,” ON AND ON, “ME AGAIN,” GLASS CASES, HOTEL RATE, ICE STORM, STATE REP, SEDATIVES, EATS DIRT, HEADWINDS, ELDEST SON, a single BLUE MAN, BENEDICT I, MADE A DEAL, GET REST, FLAMENCO, and TALK SENSE. Jiminy Christmas! Are you kidding me?!

I did struggle with the crossings of LAROSA, ALTISSIMO, and GIDDAP. Of course I wanted GIDDY-UP for that last one, but I went for GIDDUP as a compromise. I may have seen GIDDAP once in my life, but certainly couldn’t tell you where.

As I said up top, the cluing here was nothing to sneeze at, ensuring solvers felt challenged throughout. I’m not going to go through all the clues, but here’s a sampling:

Maybe they seem more obvious in retrospect, but I felt completely on the wrong wavelength during the solve. But again, I’m not complaining.

This was quite a wonder to behold—a seemingly complex, but ultimately gettable theme, tons of long flashy fill, and bold, crunchy cluing. In a word, “Wow!” 4.5 stars. 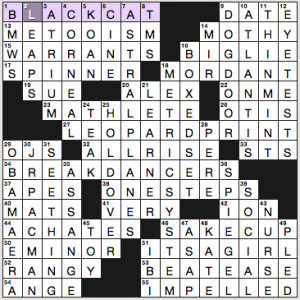 Was this puzzle just in my wheelhouse, or was it Friday-level for you, too? I guessed that 1a might be BLACK CAT, and then 1d BMWS suggested it was. Got 7 of the 8 crossings right off the bat. That is not how Saturday puzzles usually unroll.

Favorite fill, besides the seasonal BLACK CAT: MORDANT wit, MATHLETE (raise your hand if you were in Mathletes!), LEOPARD PRINT (cute clue: [Hot spots?]), “ALL RISE,” BREAK DANCERS, goofy ASTRAL PLANES, a Girl Scout THIN MINT, the METRIC SYSTEM ([Many of the world’s rulers use it], great clue), HOLD-OVER, and OBAMA ERA.

Did not care for: 53a. [Not worry], BE AT EASE. This isn’t a crossword-worthy phrase. It’s not substantively different from BE UPSET, which wouldn’t pass muster. I sure hope the entry didn’t start out being parsed as BE A TEASE, because that’d be even worse. 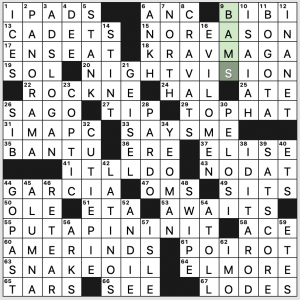 Nothing overly remarkable in this LAT Saturday challenger, but I say that as a compliment, since there is virtually nothing objectionable in this grid. I did find a corner or two a little thorny, and there was a term I don’t think I have ever heard (see below!), but this was still a fun solve. I have done a few Debbie Ellerin puzzles now, and I have to say I think I enjoy her work quite a bit. 4.3 stars today.

Big Michigan game today! And yes, I am still knee-deep in Puzzle Boat 6! 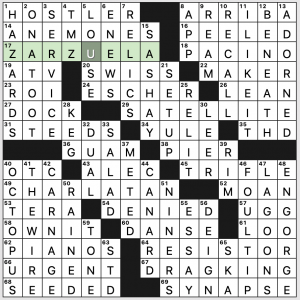 Stella Zawistowski has returned to constructing with a slew of great puzzles! I solved many of her puzzles years ago under the Stella Daily byline, and then she evidently took several years off to become one of the best solvers in the country! Stella got me into Learned League a few years ago, and she is also a great writer of trivia quizzes, or a “smith” as they are called on that site! (If you are interested in LL, look me up and I will get you a referral.) The byline for this puzzle is curiously NOT in alphabetical order, indicating perhaps that Stella had the seed idea here? Perhaps did most of the work? Having the accomplished Erik Agard as a co-constructor is certainly not a small thing, either! This might undoubtedly be one of the best solving construction teams that I have ever seen!

Having said all that, this puzzle was HARD. Well over 20 minutes for me, even on the lighting-quick Black Ink software that I have been using. The lower portion wasn’t too hard, but the top gave me all kinds of fits. But they were joyful fits, and there certainly was a great feeling of accomplishment after finishing this, which is one of the main reasons we do these difficult Stumpers! 4.8 stars for this Stella-r (see what I did there?!) puzzle!

These two can certainly continue to collaborate; I won’t mind at all! I would LOVE to bang my head against the wall for another 30 minutes on an upcoming weekend!