Before I begin, is there an Orca Award for publication with best titles? The WaPo titles are almost always fantastic. This one is no exception.

Last week’s Poe themed puzzle was just an appetizer. Today’s offering is full on spooky. It was super tricky (but definitely more treaty).

THEME: The letters DE and AD are “raised” out of the theme answers.

Well above average solve time for me. Even though I flew out of the gates, I just couldn’t quite grasp the theme until I stopped and paused for a moment, and tried to absorb what RAISE THE DEAD could possibly mean. Problem for me was that I already had some of the theme answers completely filled without realizing they were theme answers. For instance, I thought TRIP, clued as a travel company, was just one I’d never heard of. Even though I spent the whole summer in the U.K. (and used SALAD CREAM multiple times), I convinced myself that they used SAL (like Spanish salt!) in their dishes. I gave a hairy eyeball to HOME being clued as [Component of a residential mailing list], but I accepted it. The clues for both GIVE and TRAIN seemed sloppy, but I somehow convinced myself that they were acceptable answers. 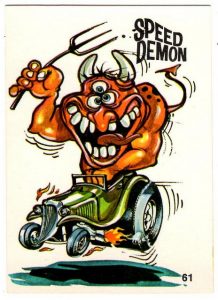 SPEED DEMON is where it hit me. And what a great AHA moment it was. I love themes where they aid you in filling in everything else, and this one didn’t disappoint in that respect at all. And it was a lot of fun to go back and see what I’d missed on the initial pass (even though I still thought I was supposed to read HOME ADDRESS as HOMEMADE DRESS [Cinderella costume piece]… which doesn’t make sense on multiple levels- my bad!)

And hey, even if you didn’t like the theme, there was plenty of spooky fill to enjoy.

And you could argue that there were double that clued more “spookily” than normal.

One clue I didn’t quite understand until I was driving today (and I pulled up to a stop sign):

Don’t whine that the word DEAD wasn’t literally raised as a whole. DE and AD separately worked well enough, and resulted in a fiendishly devilish and delightful Halloween puzzle. Also, if you’re more of a traditionalist, my Spidey Senses are telling me that, after two mind-benders in a row, you can expect something over-the-plate next week. 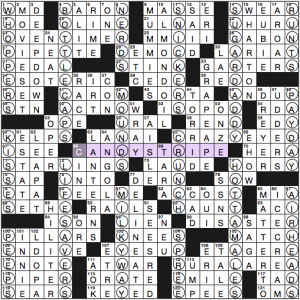 Running so close to Halloween, I’m surprised there’s not a trick-or-treat angle to the title. The revealer runs across the middle: 68a. [Pattern once used for hospital volunteer uniforms, with a hint to this puzzle’s theme], CANDY STRIPE. All the circled vertical themers (just put an asterisk before the clues!), occupying all the Down answers in six columns, contain brand names of candy clued generically.

So I enjoyed the candy theme, and I knew all the candy names Just hated that Column of Sexist Crap.

New-to-me entry, I think: 20a. [QB defenders, collectively], O LINE. Filled it in via crossings, never saw the clue, was startled to see OLINE in the grid and wondered what nonsense this is. Offensive line. Yes, they’re clued as defenders. They defend the QB during offensive plays. See also: D line.

Hours later: Oops, forgot to finish the post and hit publish! 3.3 stars from me. Definite debit for that sexist theme stripe.

THEME: Theme answers are split between 2 acrosses and a down, with the TONGUE in the answer in the down 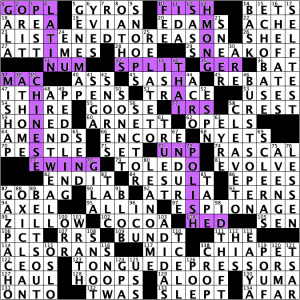 We don’t often get puzzles that start with theme answers right out of the gate at 1-Across, and I loved that – giving us that immediate indication that something weird is going on added to the excitement of the solve – and this puzzle was strong enough that it never went away. Impressive group of answers for the themes, with all of the second across parts unquestionably legitimate answers. We had another Singer misdirect today, with MACHINE SEWING, which I’ll somehow always be fond of – and always fall for. If I’m being nit-picky, the placement of the theme answers felt a bit random, but all that did was make me think there would be another language to look out for – didn’t take away from the solve. And that TONGUE DEPRESSORS revealer is absolutely perfect.

A little short on time today – but some great fill here as well IT HAPPENS, AREN’T WE ALL, BURSTS OPEN were among my favorites – but every section of the puzzle was really lively and entertaining. Not much to get stuck on, and consistently fun. My favorite area was the southwest – with GAZPACHO, OXICLEAN, and BELTS OUT crossing things like ALSORANS, ZILLOW and GO BAGS.

All the theme answers are three-word phrases with the initial B-O-B. This is the kind of theme that makes a puzzle easier without being all that much fun. 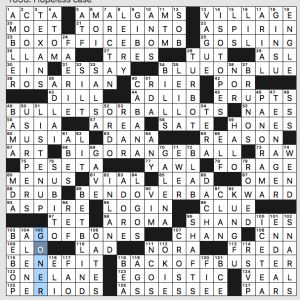 This is a pretty “meh” theme and the fill didn’t have anything particularly sparkling to redeem the puzzle.

What I didn’t know before I did this puzzle: that someone who raises roses is a ROSARIAN.