Gary Cee is a longtime constructor and iHeartRadio host. Recently he conducted an interview with NYT puzzle editor Will Shortz which is worth a listen. Find it here.

MAKE A DENT is the revealer at 39a clued [Scratch the surface, and what both words in 17-, 26-, 55- and 65-Across literally do]. The phrases that comprise the theme answers hide the word DENT as it spans across the two words. 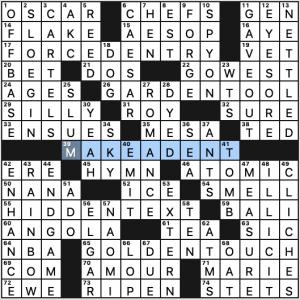 A really nice set of themers, yeah? All in-the-language phrases and no unnecessary plurals. HIDDEN TEXT is not as common as the others, but it feels legit to me.

The 9-letter central entry divides the grid in two and forces large corners, ensuring our constructor had a difficult time filling them. But you wouldn’t know it by looking at how nice they are. In truth, they’re quite beautifully filled with nary a piece of crud. Highlights include OFF BASE, SLOE GIN, GAVE OUT, EYESORE, RAINBOW, ENDGAME, ILLICIT, and CLICHES, with crosses of OSCAR, GO WEST, ANGOLA, and ATOMIC. Even the short three-letter entries in the corners are all common words or abbreviations. Constructors know that it’s not easy to make a smooth Monday grid, even less so when you’re forced into having large corners by a difficult-length central revealer. But Gary’s a pro and it sure shows here.

The one thing I’d never heard of was an EXTERN [Nonresident doctor]. But the crossings took all the guesswork out of it, and I’m happy to learn a new word, even if I doubt I’d ever use it.

I’m not sure if it was the pre-coffee solve or the puzzle itself, but I didn’t get a whole lot of joy from this one. I usually love Elizabeth Gorski’s puzzles, but there was just a little bit too much gunk in this one for my tastes, and the even the exciting and fun entries made possible by the New Yorker’s themelessness didn’t shine for me today. 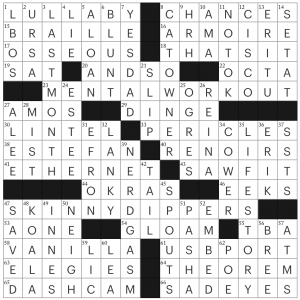 One issue was definitely the fill; LBOS at 1-Down crossing OSSEOUS (??) started me off on the wrong foot, and things never really improved from there. LBOS, SSTS, LIC, OCTA, and ERI TU were probably the worst offenders (although it was a nice change to see the full name of that last one in the grid instead of just the first word followed by a blank!).

Only one of the two marquee entries felt like a Real Thing™ — I don’t know that MENTAL WORKOUT is really something people say IRL. And I definitely don’t know what “Flex Your Cortex” is; is that a Real Thing™ or just a way of saying your brain is a muscle so when you use it you get a MENTAL WORKOUT? I did like SKINNY DIPPERS and its clue (People who are totally unsuited for swimming?) quite a bit.

Overall, not my cup of tea (coffee). Certainly had some nice spots, but the fill was just a little too rough for me.

To end on a happier note, I’m going to EMBED a Gloria ESTEFAN video: 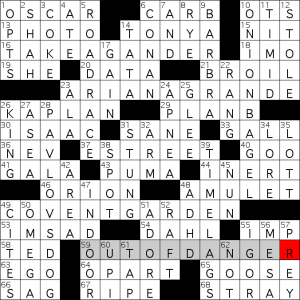 fun, fresh monday crossword from zhouqin, a constructor who is both quite prolific and consistently excellent. the theme is anagram-based:

it’s a nice tight theme, and i appreciated the extra touch of OUT OF DANGER pulling double-duty as both a fourth theme answer and as a reveal entry. good stuff.

in the fill, the marquee long answers were {Alternative to a bialy} ONION BAGEL and {Salivating animal in a classic conditioning study} PAVLOV’S DOG, the latter of which i enjoyed quite a bit, both because it evoked a very strong mental image and because i had never seen it in a crossword (look at those wonky letter clusters, with V followed by a consonant not once but twice!). as for the former, i amused myself later in the solve when i filled in {The Hunter constellation} ORION and the thought of ORION BAGEL struck me.

the rest of the fill was, as we’ve come to expect from zhouqin, clean and fun. in the words of the last clue of the puzzle, “What’s NOT to like?” 4.5 stars from me. 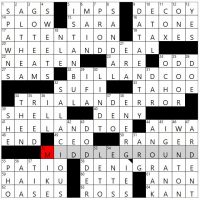 20A: WHEEL AND DEAL [Do business shrewdly]
28A: BILL AND COO [Murmur lovingly]
34A: TRIAL AND ERROR [Basic experimentation method]
41A: HEEL AND TOE [Like a typical walking stride]
52A: MIDDLE GROUND [Compromising standpoint … and what the answers to starred clues contain?]

Each theme answer contains LAND in the middle, which is literally a MIDDLE GROUND here. I think I’d have preferred an execution of this theme in which LAND was reached differently each time (instead of ___L AND ___) or if the land was unique each time (isle in the middle of one themer, another land in another themer, etc.). Even still, okay for a Monday puzzle.

My bigger issue with this puzzle is how old it felt. If you google the to-me mysterious phrase BILL AND COO, you get a 1948 movie and that’s about it. HEEL AND TOE also felt forced and/or dated. You then have a bygone Japanese audio brand, [Karaoke prop that often ends in “c” nowadays] (kids these days, am I right?), and nothing more modern than two “Friends” references, Jared LETO, and SARA Gilbert from “The Conners” (which could have been a different SARA in a previous version of this puzzle). Also, the clue [Job of typing in facts and figures] is doing a lot to gild the mind-numbingly tedious job of DATA ENTRY. Thankfully, tennis legend ALTHEA Gibson is here to save the day!

THEME: Phrases meaning hurry up are clued as RUSH ORDERs to various professionals 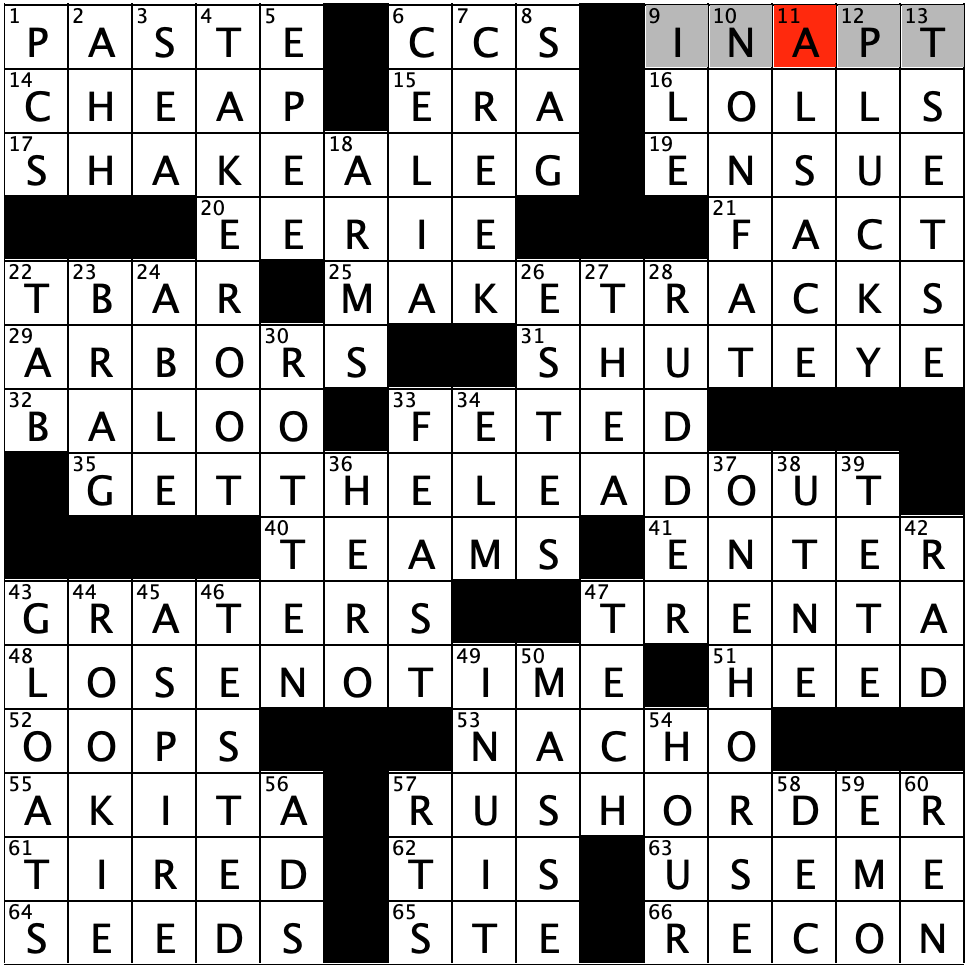 This was a cute theme that was well executed, but for whatever reason I just didn’t vibe with the puzzle so it felt like it took me so much longer than it should have to get through. GET THE LEAD OUT was my favorite answer here, but they are all work really really well for this theme.

Looking at the grid there is a lot to like here – answers like ONE HORSE, SHUT EYE, TAKE ROOT, and TRENTA should have made this puzzle fly for me, but it just felt anything but “Fast!” to me while solving. It must’ve been the cluing – with a solid theme like this and a clean and entertaining grid, I should’ve loved this puzzle.