Posted on October 27, 2019 by pannonica
untimed 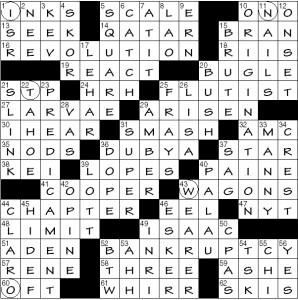 INSTRUCTIONS: “The answer to this week’s contest crossword is how the theme entries are divided.”

Grid solve was rapid. Meta solve was under 5 minutes, once I sorted out a minor cerebroborborygmus cerebrobombulus and a minor ambiguity. Note that the solution grid here contains partial spoilers—the added circles.

There are a few steps to the meta solution, but it isn’t too tricky.

Part the First. Identify the five themers, helpfully confirmed by their clues’ inclusion of cryptic parentheticals:

Part the Second. Recognize that—not atypically for meta crosswords—a lot more is going on in the grid than first meets the eye. Why else would arcana such as 46d [Sediment ridge left by a glacier] ESKER be present? Not to mention less-than-ideal and seemingly improvable fill such as VAS, KEV and KEI? (28d, 3d, 38a)

Part the Third. Sense that the theme clues and answers are a bit strained, have some tension between them. Keeping in mind the title (BIG HINT) and instructions, think about this in relation to numbers. Like maybe that a PREDICAMENT sounds like a catch-22, or that one type of bankruptcy is called Chapter 11 (among other numbers). Or notice that BUSH is in the grid, helpfully proximate to DUBYA … and it’s ‘four letters’ long!

Part the Fourth. Put this all together. Match the entries and the numbers.

Part the Fifth. Index those numbers to the contents of the matching squares in the grid; these are the circled squares of the solution grid above. In ascending order (1, 11, 22, 43. 60) they spell IN TWO, which is our meta answer.

On the one hand it’s a tightly constructed meta that works nearly seamlessly. On the other hand, it’s quite easy to guess (but not confirm) the answer from the title and instructions alone. I mean by and large people are going to complete the phrase “… things are divided …” with IN TWO. Am I right or am I wrong?