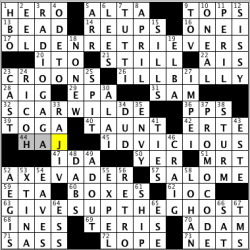 Good day, everybody! Here is hoping your last-minute plans to celebrate Halloween, if in the event you do take part in Halloween festivities, are going very well.

There’s a ghost in this crossword machine today, as the first five theme entries are all puns of common phrases and/or nouns, with the puns being created when you remove the first letter of the original terms. The five letters removed, from top to bottom, spell out the word “GHOST,” and the sixth theme entry, GIVES UP THE GHOST, acts as the reveal (63A: [Ceases to function (or what this puzzle does at 17-, 26-, 32-, 45-, and 52-Across]).

I hope that I’m not the only person who absolutely had to guess the “J” at the intersection of HAJ (44A: [“The ___” (1984 Leon Uris novel)]) and RAJIV (33D: [Indira Gandhi’s son and successor]). Was pretty confident that my first guess, the “J,” was correct, but stared at that blank square for a while! Haven’t come across PPS. in a while to denote the abbreviation for “pages,” but this one-time magazine writer doesn’t mind it at all (36A: [Sheets in a mag]). So how many of you refrain from saying HERO and call that particular sandwich a hoagie (1A: [Long, tubular sandwich])? Been to Philadelphia so many times but still don’t bow down to (made up) pressure to say “hoagie!” It’s a hero, end of story!! Don’t @ me! Loved the fill of PROMO CODE (37D: [Money-saving discount info for an online shopper]). To close, leaving you with this…“All we hear is RADIO GA GA, radio goo goo, radio ga ga (3D: [1984 hit song by Queen with the lyric “how music changes through the years”])!

“Sports will make you smarter” moment of the day: STURM (38D: [Drang’s counterpart]) – Former professional hockey player and long-time German national team member Marco Sturm played over 900 games in the National Hockey League between 1997 and 2013 as a winger. Sturm was a first-round pick of the San Jose Sharks in 1996 and, in 1999, was named to the NHL All-Star Game for the only time in his career. Between the 2002 and 2010 seasons, Sturm scored at least 20 goals in seven of the eight seasons contested during that span. 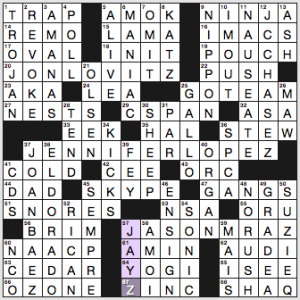 Ha! This theme is a beefed-up version of one that will run in Crosswords With Friends in several months—our puzzle arrived a few days ago. Add one more to the long list of “constructors who come up with the same theme idea independently of each other.” Nobody’s plagiarizing 99.5% of the time this happens; their brains just light on the same wordplay-related concept. This time, the idea is that JAY-Z (57d. [Rapper whose name hints at the extremities of the answers to the five starred clues]) sounds like the letters J and Z, and those letters start and finish other recording artists’ (sort of) names.

I haven’t got much else to remark on here, other than how weird plural AMANAS is. Would you say “All of my kitchen appliances are GEs/Bosches/Amanas,” or would you just use the brand name without an S on the end? I think the latter.

Matt Jones’s Jonesin’ Crossword, “Nothing Is As It Themes” – Derek’s write-up 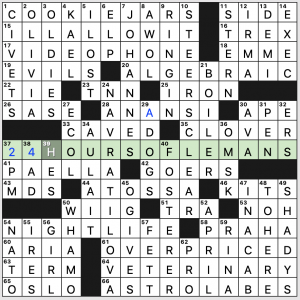 We have a gimmick in this themeless, which gave me fits in the Black Ink software, as I didn’t know how to enter numbers! (I do now!) Revealing an answer makes it blue, so you can clearly see my foul-ups in the grid, but still a fine puzzle. The answer at 38A is 24 HOURS OF LE MANS, and this is what required putting in the numbers. The crossers were interesting:

I think this was cleverly done. While this gimmick would easily fly in a NYT, there are a couple of other entries that probably wouldn’t (see below). But other than those small nits, this is another great themeless by one of the best constructors out there. Most of this grid is fairly common fill that seems to mesh effortlessly. 4.3 stars. 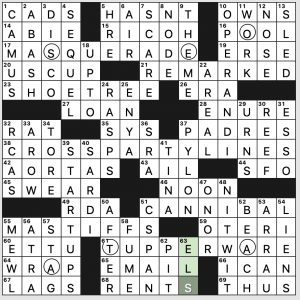 Another new constructor, perhaps? The name Chase Dittrich did not appear in the constructor database here, so that may mean congratulations are in order. The theme is revealed across the middle:

I won’t list them all, because there are too many, but each answer that contains a circle can be followed by the word PARTY. This includes the long answers masquerade and Tupperware! This also means that there are a whopping 11 total theme entries including the revealer, which is phenomenal. I thought this was a great idea and it was well executed. 4.4 stars, and if this is indeed a debut, then high congratulations!

I have the day off from school today because of the wildfires popping up all over Los Angeles. We’re safe, but it’s quite scary! Thankfully, I had this wonderful puzzle to take my mind off of those fires for a bit: 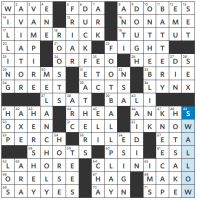 It definitely took me a few beats to get this theme, but it looks like all of those themed down entries are meanings of the word “down.” “I’m WILLING to do that!” = “I’m down!” To SWALLOW something is to down it, etc. “That Sinking Feeling,” indeed! The one I’d never heard of before is ON THE BLINK, which would be used to refer to a machine or computer being down. Who knew!? Overall, I liked this grid. Lots of theme density without sacrificing the rest of the grid too much (aside from RUR and ORFEO) and a fun, multi-layered theme. That they all actually went down is a nice bit of attention to detail. This also feels like a complete theme; I can’t think of any other major meanings of the word down. Nice!

Other thoughts:
– Love seeing women like AVIATOR Amelia Earhart represented, and we’ve even got Lizzie Borden and AYN Rand, as if there were a woman randomness generator. ::laughing face emoji::
– I enjoyed the ARK / ARC double feature, largely because I can’t ever remember which one is which.
– 11A: My mind went somewhere totally different when reading this clue!
– 28A: SEX as a [Birth certificate datum] is what we’re assigned when we’re born based on the perception of our genitalia, which is different than someone’s gender identity (how they understand their gender). I’m glad that this clue didn’t conflate the two.