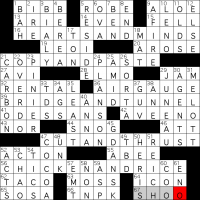 hello and welcome to episode #595 of matt gaffney’s weekly crossword contest, “This and That”. for this week 4 puzzle, matt instructs us that the contest answer is one way to solve metas. okay. what are the theme answers? the five long acrosses are all of the form [this] AND [that]:

this is, basically, as far as i’ve gotten in three days. i really don’t know what the next step is. maybe i can figure it out in the next hour.

the first thing i noticed was that CUT (of CUT AND THRUST) also goes with … AND PASTE. however, that does not seem to be relevant, as there isn’t any other pair of themers that can be stitched together similarly.

the second thing i noticed was that the C of COPY AND PASTE is shared by the down entry {6 of 118} CARBON, and CARBON COPY is a thing. that seemed promising, and indeed still seems promising. but i feel like i should have been able to find more of these, and i haven’t. you could argue that CHICKEN goes with {Cheese and salsa go in it} TACO, and i guess i wouldn’t object. the words pair in the other order, but it’s still something.

oh hey, here’s another. HEARTS goes with {Blazing} AFIRE (this sitcom made very little impression on me, but it certainly existed). hmm. that leaves BRIDGE and CUT. i suspect this is the right track, but here it’s getting murkier. there are entries that i can pair with BRIDGE, although the resulting bridges are not especially familiar. ACTON BRIDGE is a village of 600 in england. similarly, CUT has only dubious partners, although there are many such, perhaps the least dubious of which is AGENT’S CUT. i think this isn’t it.

aha, okay. look at the initials spelled out by the theme answers: HAM, CAP, BAT, CAT, and CAR. these are all common words, which feels like it is probably not a coincidence. (looking at initials of things is usually my achilles heel in meta solving, so i’m pleased to have finally thought of it for once.)

not only that, they can each go at the start of a common [this] AND [that] phrase:

and look, OVA, a synonym of EGGS, is in the grid at 6d, clued as {Fertility clinic collection}. are there other things relating to the other second words?

… no. there really aren’t. well, maybe. hey, a ROBE is kind of like a GOWN, and not only that, it’s clued as {Gown cousin}. could it be that each of these second words is actually in a clue?

yes, it could! not only that, but each one starts its clue:

this explains the somewhat arbitrary choices made in cluing four out of those five entries (everything but {Gown cousin}). taken in order, these five words spell out TRIAL, so repeating the [this] & [that] idea gives TRIAL AND ERROR, which is indeed one way to solve metas. whew.

got this one in just under the wire, and boy is it cool. no time to comment further, since now it’s noon and i have to publish. awesome meta, though!