In advance of tomorrow’s festivities, our theme today gives us phrases that begin with a traditional Halloween baddie. 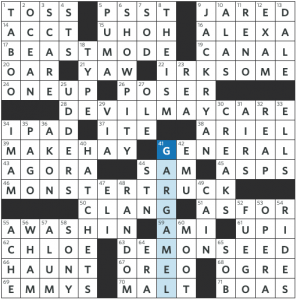 Not much wordplay going on here, but an enjoyable outing nonetheless, especially since BEAST MODE got me in a good mood. Note also the apparently unthematic appearance of OGRE [Grimm baddie] in the grid.

The fill had much to like as well. I actually lol’d at 41d [Sworn enemy of the Smurfs]. I had to dig GARGAMEL out of the recesses of my brain, but thankfully he was in there somewhere. I wasn’t sure of the spelling, but somehow guessed right.

I also enjoyed seeing fully-named JACK RYAN [Role for Baldwin, Ford, Affleck, Pine and Krasinski] having read all those early Clancy books. Note that the current Amazon series of the same name will air its second season on November 1st.

I wasn’t so sure about SHOW PITY as an entry at first, but it’s grown on me, and HATCHETS gets a good clue [Small-time hackers?]. Another good clue is used for ALEXA [Answerer in an Echo chamber?] referring to the Amazon device.

I don’t think I’ve ever heard the phrase MAKE HAY [Capitalize on an opportunity]. Apparently the whole phrase is “make hay while the sun shines,” meaning take advantage of a good situation. I’ll need to remember that one.

One more clue worth noting: [Pythagorean square?] is cleverly used for AGORA. Apparently there is such a thing as a Pythagorean Square which is used in numerology.

Nothing much to gripe about, so I will leave it at that. Fun puzzle even despite the straightforwardness of the theme. 3.75 stars. 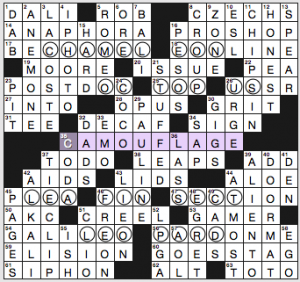 You know those puzzles where you zip through with nary a hint of the theme, and it doesn’t matter because you don’t need the theme to solve the puzzle (you need it only to understand the theme)? Yeah, this was one of those. I zipped, and looked for the theme afterwards. 35a. CAMOUFLAGE is the theme revealer: [“Trick” used by the creatures found in rows 3, 5, 11 and 13]. I’ve circled the camouflaged animals hiding in the grid, spanning all the black squares in those four rows: a reptilian CHAMELEON, a cephalopod OCTOPUS, a buggy LEAF INSECT, and a mammalian LEOPARD. Neat. I definitely did not see the hidden animals while solving.

Toughest word in the puzzle: 14a. [Repetition of words at the starts of successive phrases, in rhetoric], ANAPHORA. I didn’t know it, but with the -HORA at the end, I suspected it might be that obscure word that was included in the answer list for a recent NYT Spelling Bee puzzle (both ANAPHOR and ANAPHORA! good gravy). Wikipedia explains: “The anaphoric (referring) term is called an anaphor. For example, in the sentence Sally arrived, but nobody saw her, the pronoun her is an anaphor, referring back to the antecedent Sally. In the sentence Before her arrival, nobody saw Sally, the pronoun her refers forward to the postcedent Sally, so her is now a cataphor (and an anaphor in the broader, but not the narrower, sense).”

Overall, pretty smooth aside from the knotty ANAPHORA. Four stars from me. 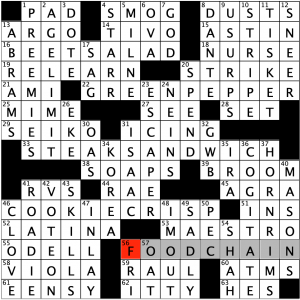 Clever concept here – and very well done. I liked the variety of foods chosen for the puzzle – though I think the meal made by the chain – SALAD GREEN, PEPPER STEAK, and SANDWICH COOKIE is the preferable one here.

The southwest and northeast corners are beautiful and made getting across the grid a true pleasure. USURP happens to be a favorite word of mine, but that whole corner sings and then working down and left to the impressive southwest area displayed the construction SKILLS.

I really enjoyed the flow of this puzzle as well. Unusual arrangement of black square took me in unexpected directions throughout the solve which added another level of fun.

Loved the mention of Dolores Huerta in the clue for LATINA – if you don’t know her you should: 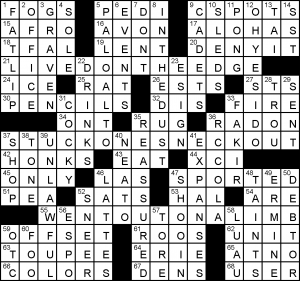 Mr. Mendelson has composed a simple enough theme for us today – three idioms in past tense defined by [Risked it big-time]: LIVEDONTHEEDGE; STUCKONESNECKOUT; and WENTOUTONALIMB. Nothing intricate, but all three are suitably idiomatic. 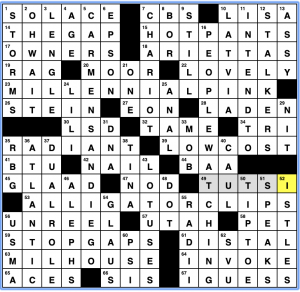 Rebecca Falcon has a guest themeless at the AVCX today, and it’s a nice one! Here’s my highlights:

I’m keeping this one short and sweet. Happy Wednesday, all!