This week’s Fireball is a contest. We’ll post a review once the deadline has passed.

Surprisingly, this puzzle is not outrightly Halloween-themed. Given the title and the day, I felt sure this would be about witches’ spells, but it’s not.

Neither is there a clued revealer to tell us what’s happening, but it’s pretty clear from the circles in certain entries. Starting at 46a and proceeding to the right and down we find the phrase BROKEN BONES. Every other set of circled squares contains a Latin name for a particular bone, broken in that each word turns downward at a certain point. 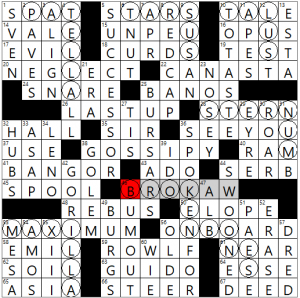 Slight ding for having two ankle bones in the group (actually, I’m being told the TARSUS is the group of ankle bones of which the TALUS is only one member).

I would have loved it if somehow the bone words were connected to each other in the grid ala the old “Dem Bones” song.  (Bit of trivia for you: There are no arm bones, beyond the “shoulder bones,” in the song.)

As it is, I found the theme only mildly interesting. Once it’s sussed out with the first bone, the only question remaining is what bones would be represented. I even filled in the revealer without a single crossing. There’s no wordplay and no humor in the theme.

The fill has some high points though as well as some challenging stuff. I liked CANASTA, GOSSIPY, BANGOR, ON BOARD, SPOKEN FOR, TO TASTE, and BUM OUT. On the challenging side, I’d put UN PEU [A little, on the Loire] which is beyond my minimal knowledge of French, REDCAP [Bag toter] which I take is related to “skycap,” and ALB [Priestly garment] which I know, but expect is tough for those not up on their crosswordese. Also, NOSEY with an E just doesn’t seem right.

A nice theme, but maybe not necessarily as entertaining as one would hope. 3.5 stars. 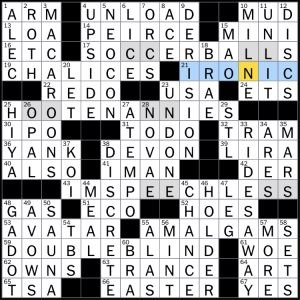 Today’s NYT is a co-write between Ezra Brauner (who appears to be making their NYTdebut – congrats, Ezra!) and Jeff Chen.  It’s a packed grid with a few things going on, so let’s start with the theme entries:

Looking at the down answers that cross the double letters in these answers, it’s easy to spot what’s going on.  The shaded squares are ‘blind” and get ignored when solving the down clues that intersect these squares – 7D’s “Surgery sites, for short” ignores the C in SOCCER BALL and is just OR(C)S.  28D takes advantage of ignoring two squares for “Fertilization targets” and (N)OVA(E).  You get the picture.

The icing on the cake here?  The double letters taken singly spell out CLONES, a different type of “double” experiment.  It’s always nice when a theme’s able to make those letters also play with what’s going on in the grid.  I wouldn’t say I’M SPEECHLESS, but this is nicely executed for a relatively constrained theme. 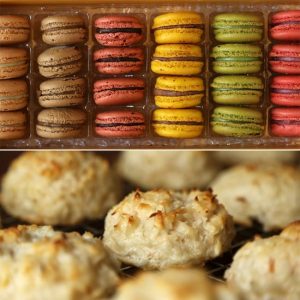 I’m not familiar enough with the comic strip “Big Nate” to know that Lincoln PEIRCE is its cartoonist, but the rest of the across fill on the top part of the grid was pretty clean.  I have a bone to pick with 3D, however – MACAROONS are not “Colorful French cookies”.  MACARONS (up top in the image to the right), yes.  MACAROONS (below) are typically a coconut-based confection, while MACARONS (again, up top) are the egg white and ground almond sandwich cookies that are popping up everywhere.  It’s like how DISCRETE (in this puzzle, “Separate”) and DISCREET (not in this puzzle, “unobtrusive”) are different things 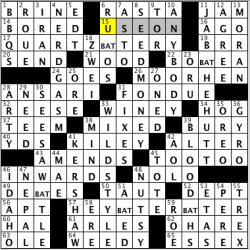 Anyways…Good afternoon, everyone! Here is hoping all of your Halloween plans have gone off without a hitch, from buying inordinate amounts of candy to pulling off that award-winning Halloween costume to sitting in bed and doing nothing while lamenting all of the trick-or-treaters making noise outside of your window. Today’s slightly-harder-than-normal Thursday offering has gone batty, in the sense that rebus squares are included that end up spelling out the word “BAT” inside of each rebus square.

There is some real saucy non-themed fill to enjoy in this grid, with entries such as SEED MONEY (8D: [Start-up funds]) and the titillating NERDGASM (4D: [You might get one watching an unboxing video or a movie trailer debut]). The latter of those two aforementioned entries I did not see at first, but that’s because I stupidly put in “sent” instead of SEND (20A: [Mail off]). Fictional names of characters in television shows are normally not a strong suit of mine when solving grids, so I’m glad that MORAN went down for me without too much of an issue (13D: [Blake ____ (President McCord’s personal secretary on “Madam Secretary”)]). Maybe it is me, but I definitely think the middle of the grid has a sing-song feel with WINEY (33A: [Tasting like Pinot]) and KILEY (41A [Indie rock band Rilo ___) and WEEDY (64A: [Like a neglected lot]). Haven’t had lunch today and solving the grid did not help with keeping the stomach from growling, with BBQS (1D: [Grilling spots, for short]) and GYRO (36D: [Pita-and-lamb lunch]) MIXED (38A: [Combined]) in with either an OREO (35D: [Cookie similar to the Trader Joe’s Joe-Joe’s]) snack break or some JAM to put on a hot biscuit (11A: [Fruit spread]). Before chowing down on food like a HOG (34A: [One who doesn’t share]), there is this…

“Sports will make you smarter” moment of the day: TOOTOO (45A: [Very very]) – Born in Manitoba and raised in the Canadian territory of Nunavut, former professional hockey player Jordin Tootoo became the first player of Inuit heritage to ever play a game in the National Hockey League when he made his debut on Oct. 9, 2003 with the Nashville Predators. In 723 career regular-season NHL games while playing for four teams (Nashville, Detroit Red Wings, New Jersey Devils & Chicago Blackhawks), Tootoo, who played mostly as a winger, scored 65 goals, had 96 assists and racked up 1,010 penalty minutes. Tootoo retired in October of last year to focus on his charity work in giving back to Inuk people and other indigenous communities.

Thank you so much for your time, everyone! As it stands, there’s a 73.4 percent chance that I’ll see you in this space next week! Have a good rest of your Thursday! 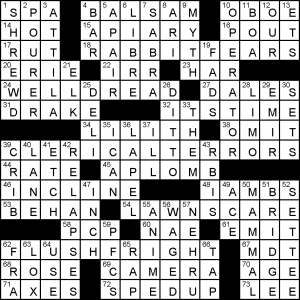 The puzzle adds an arbitrary letter to the beginning of the last word of several phrases to form a synonym for phobia (or phobias, since some are pluralised.) Of the five base phrases, FLUSHRIGHT may be unfamiliar to some. It is another way of saying right justify – that is all the text lines up on the right hand side.

Not a lot of splashy answers outside of the somewhat busy theme. The longer downs are OPERATOR and RELAPSES, which suggests compromise was the order of the day, and sometimes that’s the better option.

LILITH and ATTILA can be seen as broadly thematic if you wish.