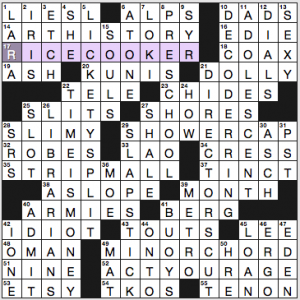 It’s always a delight to see Robyn’s byline on a themeless, because her puzzles are uniformly good and fresh. Take a gander at the sparkle here. We’ve got some ART HISTORY atop an indispensable RICE COOKER (if you think rice cookers are dumb but there are no Asians in your household, hush). There’s a STRIP MALL with a fun clue, [Shopping destination that sounds risqué]. A dismal MINOR CHORD atop a chiding ACT YOUR AGE. LICKETY-SPLIT, SLAPSTICK, and DECODER RING are fun. A cinematic DIRECTOR’S CUT and the axiom TIME IS MONEY. And the worst stuff offsetting the juicy fill is ASLOPE, TELE, IONE, SYR, HRE, and PST, none of which are beyond the pale for a themeless or have knotty crossings. 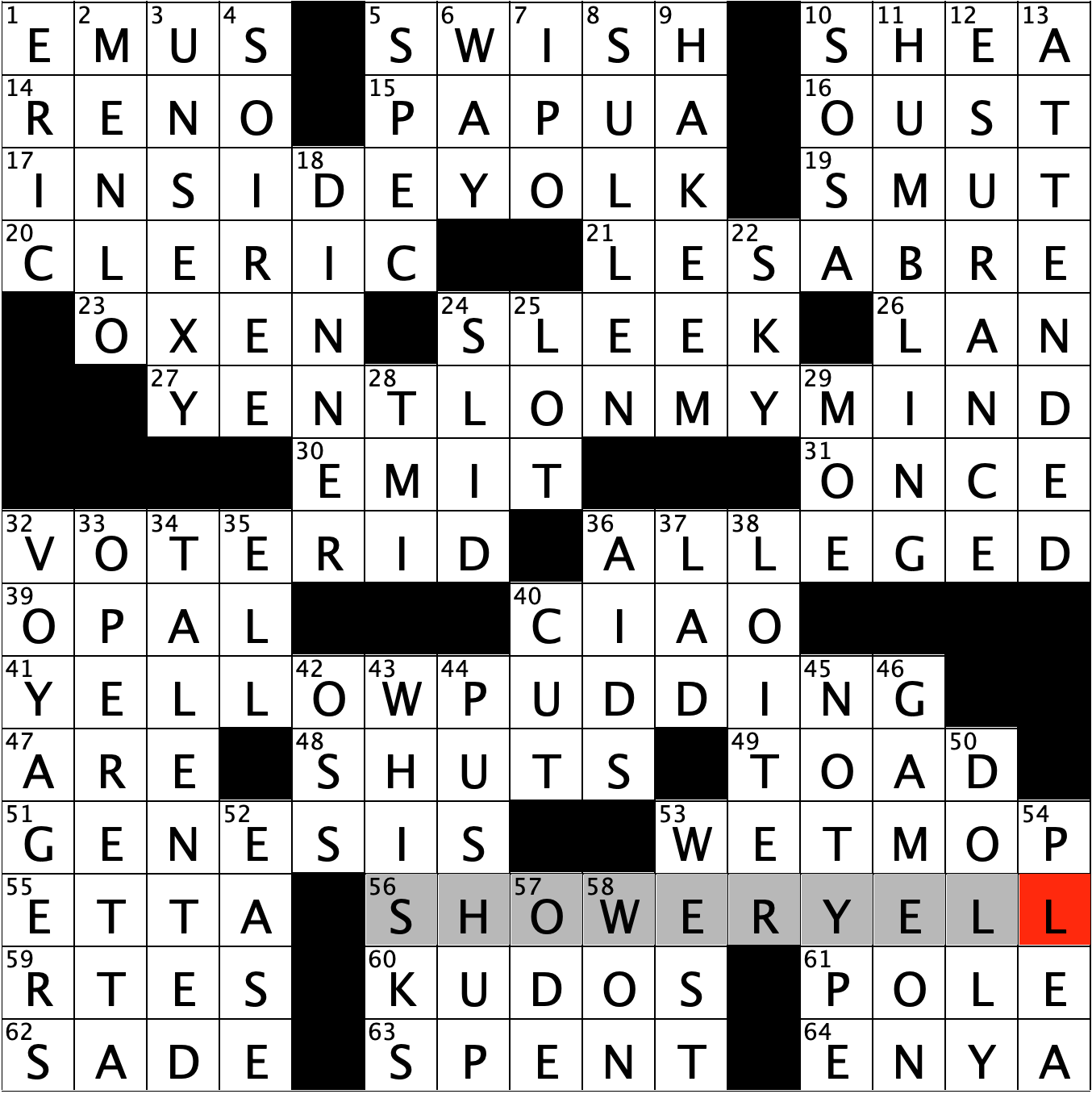 This theme is so well done here – with really entertaining results across the board. YENTL ON MY MIND was my favorite as far as an answer, but as I was unfamiliar with the song “Gentle on My Mind”, it didn’t help much with figuring out what the theme was. I also loved that the spelling of each word had to be completely changed to make the ‘y’ sound work – not just a letter swap.

Low word-count for a themed puzzle, with just 72, with nothing obscure or unfair – very impressive. The VOYAGERS, OPERETTA, TALENTED corner was my favorite.

Some SADE to start your day…

Well, I just spent half an hour in a google-and-wikipedia rabbit hole reading about the brilliant ANNA JULIA COOPER and only stopped because I realized I still had to write this review. What a *gorgeous* puzzle and solving experience! For starters, that is a hell of a central entry: not just a perfect 15-letter entry, but also someone I definitely should have known about, and am so grateful to the constructor for bringing her into my awareness. 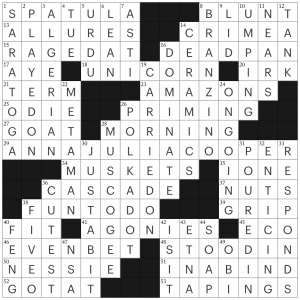 If that had been the only selling point of this puzzle, it still would have been excellent, but there is so much goodness packed into these 62 (!!) words. I adore this unique grid construction. The unusual and attractive (ENTICING?) block pattern make the middle of this puzzle into essentially one giant staircase of 7-letter words across and 8-letter words down, and every single entry through the staircase is fabulous. Just, wow.

In sum: this was truly one of my favorite puzzles I’ve done in some time, and all for the low, low price of IONE/OBI/ASTI. Such a bargain! All the stars from me.

There are two grid-spanning entries and a central linked crossing: 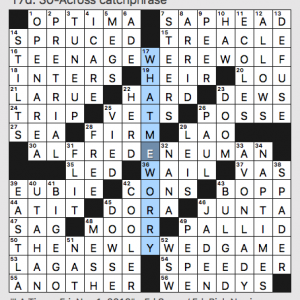 They’re all interconnected, which must mean something, but I have no idea what. Maybe that’s because I’m writing this at 7:00 AM Pacific time and I haven’t yet had breakfast or coffee. Anyone figured this out?

What I didn’t know before I did this puzzle: that Emeril LAGASSE is known to say “Pork fat rules!” 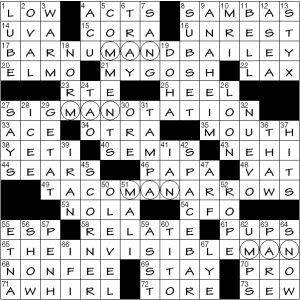 Solved this on Wednesday, writing about it Friday morning. In between, we were treated to Brauner and Chen’s Thursday NYT crossword, which employs a similar gimmick. To wit, letters essential to the themed across entry that are ‘optional’ for the crossing downs.

I this puzzle, the letter string, M-A-N (which I’ve circled for for convenience) is the pivotal element, befitting a Halloween-adjacent offering.

But wait! you may say, 4 entries × 3 letters = 12 so why isn’t it 12 mysterious down clues? Ah, because one of the down clues passes through two theme entries. MYSTERY SOLVED.

Nifty theme—even if it may not be as much of a surprise as intended—and exceedingly well-executed.The rest of the grid suffers a bit, with a plethora of medium- and short-length fill, rather mundane entries and abbrevs., but this is not unexpected in such a theme-dense crossword.