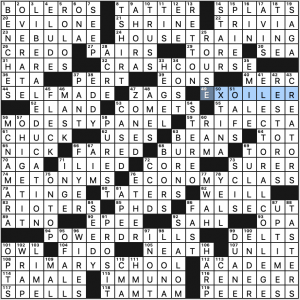 Some good ones here, some not as good. But overall, despite mostly being non-partisan, I expect it might still evoke some unpleasant feelings. One thing people enjoy about crosswords is that they’re a short escape from the real world, and these days, the real world is filled with ugly politics. I’m not sure why a constructor would want to wade into those waters.

But the puzzle lost me at 49a EX-OILER [Gretzky of the NHL or Moon of the NFL]. Never mind that the X crosses XTINA [Aguilera, to her fans], which is ultimately gettable, though I stuck hard and fast to STINA, which seemed plausible to me. And never mind that 25d [Shake awake] could easily have been ROUST instead of ROUSE. So yes, I did Natick at the X. Because, who has EX-OILER in their grid!?! Let’s just go ahead and add all the other teams to our word lists, shall we? EX-JET, EX-MET, EX-BUC, EX-BROWN, EX-BILL, etc., etc. Bleah!

There were a few high points in the grid like “OH I GET IT,” TRIFECTA, and METONYMS. But there were also more sub-par entries than I’d like to see: green painty EVIL ONE, long partial A TINGE, lesser known proper names WEILL and HEGEL, and crosswordese INGE, ELAND, AGA, OPA, AT NO.

Overall, not the funnest outing for me. 2.8 stars. 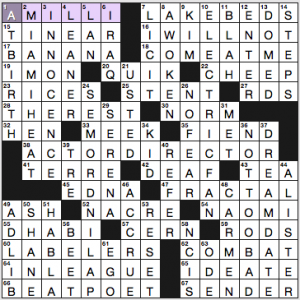 Dang! I was not expecting to hit a never-heard-this-one at 1-Across. [2008 Lil Wayne hit whose title is slang for lots of money], “A MILLI,” that came out before I started listening to rap on the radio (advantage of radio: I get the radio edits and miss the words that aren’t radio-friendly). Just watched the video, and the song doesn’t grab me. The “milli” of “million” was inferrable enough, though.

Fave fill: “COME AT ME,” ACTOR/DIRECTOR (might’ve been nice to spotlight a woman like Jodie Foster in the clue—and wow, very few women have been signed to direct themselves), BEAT POET, MIAMI HEAT, SEMORDNILAP (why did I misremember this as SEMILORDNAP? pandrolimes are not a thing!), and DREAM DATE.

Four stars from me. How’d the puzzle treat you, good FIENDs? 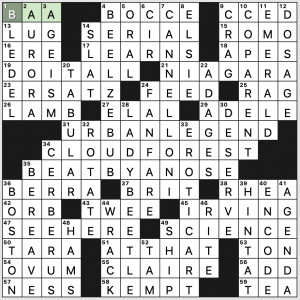 Kyle Dolan has another LAT themeless for us this week. Just over 5 minutes is my solve time, which is about right for a Saturday LAT. I am not sure I can solve these much faster, but I better figure it out now, since the ACPT is coming quickly! They have opened up room reservations already, meaning I better scarf one up quickly! Anyway, I digress. It would be great to see Kyle again at the ACPT, so here’s hoping he comes again! 4.6 stars for this one.

Highlights, which will include the stacked 11s in the middle: 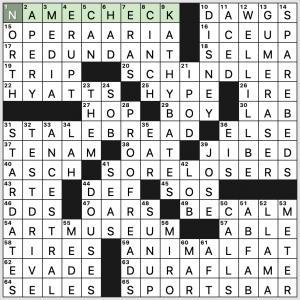 This was certainly Less Ruff this week, for sure. I had most of this grid filled in after only about 7 minutes, but my final time was just over 10 minutes. I struggled with the NW corner again; it seems as if I can never finish the part that is usually where everyone starts! But this solve was fairly smooth, so I will take it. That also means watch out next week! 4.3 stars for this one.