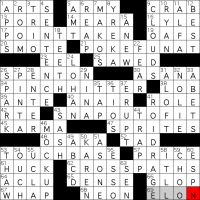 hello and welcome to episode #596 of matt gaffney’s weekly crossword contest, “What Can We Do for You?”. i often do week 1 puzzles without looking at the instructions, but this week i saw by accident that we were looking for certain parts of the body. okay. what are the theme answers?

the first words of these themers are POINT, POKE, PINCH, SNAP, TOUCH, and CROSS, which are all things you do with your fingers. so that’s the meta answer. it’s a nice touch that none of the themers use the key word in the same sense as it applies to fingers.

i think this is a really nice theme with a lively and varied set of theme answers. the meta is certainly easy enough for a week 1, and it’s the kind of puzzle that works better as a meta (albeit an easy one) than a standard crossword.

with six themers, there isn’t a great deal of room in the fill for anything especially lively, but ROID RAGE is pretty great and i enjoyed MOCKUP as well. cluing TRAPP as {Liesl Von ___ (“The Sound of Music” role)} is a sly joke, since it’s much more common to see LIESL in the grid with the von trapp clue; there are, of course, many other von trapps in the film but no other famous LIESLs to clue.