Our theme is spelled out in the mountain-shaped set of circled letters in the center of the grid. This turns out to be BOOMERANG, and the three long Across answers are common phrases that echo a boomerang’s action. 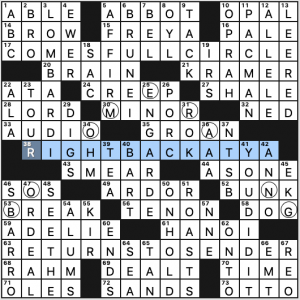 I found this to be a pleasant enough theme that worked quite well. All the phrases are common yet lively, especially the middle one.

My only nit is the added S’s in the first and third entries strictly to make them 15-letters long. I think the puzzle would be stronger with the 14-letter versions COME FULL CIRCLE and RETURN TO SENDER which are both more commonly used, especially since one is the name of a famous song. This would undoubtedly require adjusting the grid by moving those two entries toward the center, but with only three main theme entries, my instincts tell me the constraints wouldn’t be egregious.

Aside from that, the fill is strong with exclamatory “YOU DID IT!” and “ENGARDE!” (with a great clue [Pointed warning?]). I also liked seeing Vince LOMBARDI [Namesake of the Super Bowl trophy], though I will admit to thinking it was Guy LOMBARDI. (Bzzt! Nope, it’s Guy Lombardo.) Other goodies: BRUNEI crossing FREYA, KRAMER crossing PAC-MAN, and ON HOLD. 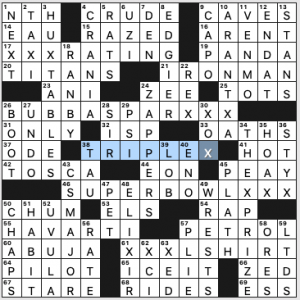 Hello, solvers! Some of you might be thinking of trying your hand at constructing crosswords. If you’re part of a group that’s underrepresented among published puzzlemakers (e.g., you’re a woman, a person of color, and/or LGBTQ+), Ross Trudeau is keen on collaborating with newbies in those groups. You can find his contact info—and that of a bunch of other helpful constructors—at the Crossword Puzzle Collaboration Directory.

I like some of those X crossings—I remember ARANTXA‘s heyday and her spelling, THE X PRIZE is cool, and I’ve long loved the word ELIXIR.

I don’t love ZEE and ZED doubling down on the RATE/XXX RATING duplication. NAPPERS is a little weird as a plural, but NAPPERS/NEE could have cut ZEE from the grid. Also not keen on the phrases END AT, ICE IT, and RAN BY.

3 stars from me. I didn’t enjoy this one as much as I’d hoped to. It lost me right at 1-Across, NTH, and struggled to win me back. 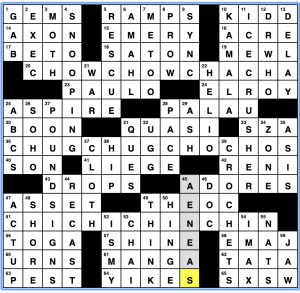 Juliana Tringali Golden has another guest puzzle for the AVCX this week, after her previous (themeless) debut.  This was rated a 3/5 on the difficulty scale, but fell pretty easily for me as soon as I figured out what the theme was:

Pretty straightforward – once you figured out how the “echoing” in each themer worked, it was easy to fill in the letters you didn’t have based on the ones you did have. 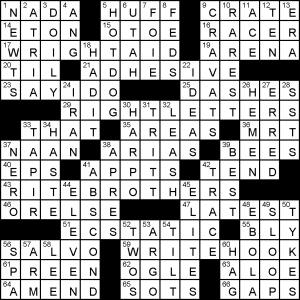 Today features a less common wrinkle on the “phrase with heterographs in” theme. The set, rendered in IPA, is “raɪt”, and two pairs are swapped creating “wacky” answers. Answers 1 and 3 are WRIGHTAID and RITEBROTHERS – switch those around to find the normal answers. The same goes for RIGHTLETTERS and WRITEHOOK. The clues are quite thoroughly tortured, but it’s an interesting theme variant nonetheless.

Most of the clues and answers today felt quite simple, perhaps because it’s unusual to have a Wednesday theme in the LA Times with “made-up” phrases. [Chow line?] for LEASH and [They’re often loaded] for SOTS are among the trickier clues, but still fairly transparent.

Not a fan of [Piglike forest dweller] for TAPIR. Not sure what makes them piglike. They’re Perissodactyls and pigs are Artiodactyls…