I have not been on the same wavelength as this constructor for quite some time. There’s good wordplay here and even some humor, though most of it missed me. But the theme was confounding, even after the solve, and the title, once discerned well after I was done, is too esoteric and, frankly, goofy.

At first glance, it looks like we have a simple re-parsing theme. 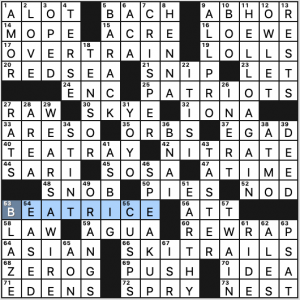 Now, about that title. I couldn’t see any connection between the entries for the longest time, other than the re-parsing business. The title was no help, despite trying to re-parse it as “The T Roops”. I did eventually notice that the first word in each entry ended with a T.

Then it dawned on me. Not only does the first word end in a T, but the second one starts with an R. The title does need to be re-parsed…but as “The T.R. Oops.” Yup, you heard me right. That’s our theme: “The T.R. Oops.” I guess this is meant to indicate that each theme answer had an oopsie between the T and the R, where “oopsie” is defined as a word break. To struggle to find the theme and then realize it was this, was, shall we say, groan-inducing.

Ultimately, though, I do appreciate the wordplay and the attempts at humor, even though the execution of the entries and clues were mostly a miss for me. Perhaps other solvers enjoyed them better than I did.

And the long fill is very nice: HELLO AGAIN, WEARS A WIRE, CRISPER, BARACK, and SPEAK UP. However, ORANGS definitely goes in the minus column.

Jim P. here sitting in for Matt who briefly sat in for Ben, though he was unable to sit for any longer. 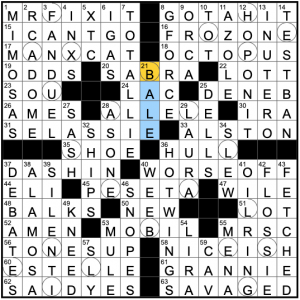 Today’s puzzle has a whole mess of circles that seemed like they might be in a pattern, but I couldn’t be sure. I did notice HOPE in the upper right but that’s as much as I could manage during the solve. I ended up finishing the grid completely as a themeless then going back to try to make sense of the circles.

It turns out there is a pattern. Each group of circles is in a diamond shape, and each word in the circles/diamonds can precede the word “diamond.” So we have FAUX (diamond), HOPE (diamond), BASEBALL (diamond), NEIL (Diamond) {Ha! That was worth a chuckle.}, and LEGS (Diamond). I didn’t know that last one off the bat; my first thought was that it was the name of a gangster or musician. I was closer with that last guess. LEGS Diamond is a rock band from Los Angeles formed in 1977 and still performing today.

Even though the theme was inscrutable to me during the solve, I gotta say I like it. I especially like how BASEBALL fits perfectly in its diamond and how you go around the diamond, passing each letter as if you were running the bases (as viewed from the top down).

The rest of the grid is a real mixed bag with some strong stuff as well as some real eyebrow-raisers. Those huge corners are lovely to behold, and for the most part, they’re filled well, but there’s some iffy stuff in there, too.

I love starting off at 1a with MR. FIX-IT, but right next door at 8a is GOT A HIT which feels a little arbitrary. Next is “I CAN’T GO” which also felt arbitrary at first, but I’m warming up to it. FROZONE is a highlight for me, and MANX CAT and OCTOPUS are strong. And that’s just the top three rows!

Other goodies: SELASSIE, WORSE OFF [In poorer financial shape, say] (which is better than my first guess—LESS RICH), and HOT WINGS. I’m on the fence with TOTAL LIE.

In the “Huh?” category is HOP ON IT [“Get going already!”]. I’ve heard “hop to it” and “get on it” but never HOP ON IT. OIL RING [Engine part that distributes lubrication evenly] is not one I’ve heard of either, but at least it sounds like it has some legitimacy. I could say the same about FAN DUEL as well. And then there’s AZOLE, ALSTON, and WEEB. As I said, “Huh?”

Though this solved more like a themeless for me without the usual Thursday trickery, it was still an enjoyable outing thanks to some fun fill and strong cluing. Those outweighed the clunky bits in the fill. Four stars.

Howard won the ACPT in 2016. He’s a top solver, a skilled constructor, and one of the nicest people in Crossworld. This puzzle is a construction tour de force that was challenging and fun at the same time. Quite an achievement!

Each theme answer runs Across, and each has a word that fits the title. The Down clues only make sense when you remove that word. The Down answers are real words either way. 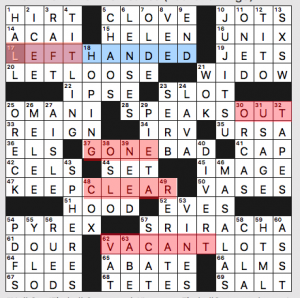 Phew. Really remarkable construction and a lot of fun to solve.

What I didn’t know before I did this puzzle: that the Robbins of Baskin-Robbins was named IRV, that Al HIRT performed at the first Super Bowl halftime show, that JUJITSU means “soft technique,” and that Huy Fong Foods makes SRIRACHA. 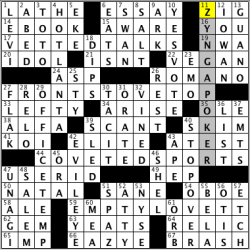 We made it back again for another week! Hello, everyone! Here is hoping that you all are doing well and that you’re ready for what is supposed to be the coldest Veterans’ Day on record for many parts of the United States, at least according to a story I just read about the projected temperature drops that are predicted to happen over the weekend.

Speaking of Veterans’ Day, here is a crossword tribute to the men and women of the Armed Forces here in the US, as the letters “VET” are added consecutively to common phrases and/or proper nouns to create puns with the theme entries. (Wished that “POPPY” could have been an entry in the grid as well, as I’ve seen a few people here in New York the past couple of days, including a co-worker friend from England, wearing the Remembrance Poppy on their lapels to honor veterans in England, Canada and Australia.)

Another lively grid with fun, non-themed fill, though one clue that stood out for me was the pseudo mislead — and literal interpretation — of the clue to GUANO (13D: [Bat shit]). The wording of the clue is embedded in the minds of so many as the mental state that it took me a little bit to come off of that to answer correctly. Staying in that northeast area, ZYNGA POKER (11D: [Online gambling app]) took the longest for me to take down, especially since I first had “tic” instead of ZIG (11A: [Jerky maneuver]) and also had put in “scan” instead of SKIM (40A: [Read quickly]). Definitely gave that area of the grid the EVIL EYE once I untangled myself from that mess of my own creation (42D: [It’s a bad look]). The last time I was in HOTLANTA, in Dec. 2017, I stayed in a hotel that was about 4-5 blocks away from the flame was lit to open the 1996 Summer Olympic Games (4D: [Southern metropolis, jokily]). Even though I was there on an assignment and was just looking out of my window at the hotel randomly, being in the area was an overwhelming experience, as I absolutely flashed back to when I was at home as a kid and seeing Muhammad Ali light the flame on television during the opening ceremony. Powerful!

“Sports will make you smarter” moment of the day: LEFTY (33A: [#Resistance member]) – Let me quickly tell you the story about a couple of southpaws from yesteryear who made a profound impact on the game of baseball in the States and around the world. Hall-of-Fame pitcher Lefty Gomez (Vernon was his given first name) was one of the first Latino stars in Major League Baseball, making the All-Star for seven straight seasons, between 1933 and 1939, while playing for the New York Yankees. Born in California to a Spanish-Portuguese father, Gomez won five World Series titles with the Bronx Bombers and, to this day, still holds the record for most World Series wins as a pitcher without a defeat (6-0). Gomez was inducted into the Hall of Fame in 1972.

Also active during the 1930s, outfielder Lefty O’Doul (Francis was his given first name) was one of the great hitters for average during his time. During the 1929 season while playing for the Philadelphia Phillies, O’Doul amassed a whopping 254 hits, a National League record that stands to this day. After his playing career ended, O’Doul was the sport’s goodwill ambassador before and after World War II and was influential in the growth of baseball in the now baseball-rich country of Japan. The Yomiuri (Tokyo) Giants, by far the most popular pro baseball team in Japan, were given the nickname “Giants” in 1934 by O’Doul, who played for the New York Giants (baseball team, not football) in 1928 and from 1934-35. Coincidentally enough, the man who has the Major League record for hits in a season is a person who was a baseball icon in Japan before coming to play in the United States, Ichiro Suzuki, who had 262 hits while playing for the Seattle Mariners in 2004.

Thank you so much for your time, everyone! Chances of making it back here for next week’s puzzle: 91.5 percent. (Some sports-related travel early next week should not hold me up from being here on time. At least I hope so!) 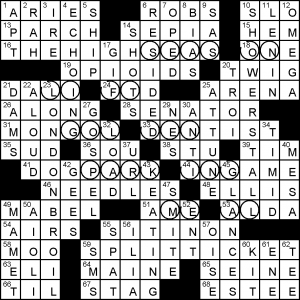 The “words that partner” theme trope is somewhat overdone in the LA Times. That said this puzzle has some interesting variations on that theme. The keyword is TICKET and it is SPLIT across two answers. This makes for a busy puzzle, but one with few long thematic answers. The first two answers contain SEASON and LIFT – and had me thinking the keyword would be SKI; I haven’t heard of a LIFTTICKET but apparently it’s a ticket for a SKILIFT… So. SEASON, GOLDEN, PARKING and MEAL are more familiar tickets for me.

My favourite answer is of course DOGPARK, though not all are off-leash. On vs. off-leash is a divisive question. Dogs are more reactive on-leash, but poorly socialised off-leash dogs can be horrific. In both cases, personal responsibility is the answer.

I struggled (though guessed correctly) at the AME/KEATING intersection. KETTING and KENTING seemed less likely.

Crossword-ese cross-pollination: TIL Tuesday (66A) launched the career of AIMEE Mann…