David Plotkin is one of America’s fastest crossword solvers (he earned 3rd place at this year’s ACPT), but this appears to be his first puzzle creation alongside veteran constructor Jeff Chen.

The circled letters in today’s grid have been morphed (in one direction) to alter a familiar phrase into something wacky. In toto, the circled letters spell BUTTERFLY, in case you didn’t recognize the dominant shape in the center of the grid. 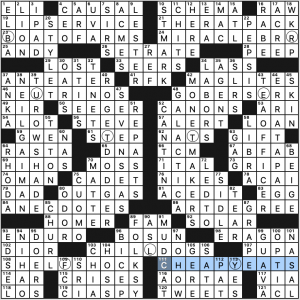 But wait…there is more.

Not liking the use of “cheap dates” as a base phrase, I started looking at the other base phrases. “Boat” was originally “coat”, “Turow” was originally “throw,” “Roget” was originally “Roger,” etc. That’s a C, H, and R so far. Hmm. If you do the rest, they spell out…drum roll, please, CHRYSALIS. And that’s how I figured out the last base phrase was cheap seats. Wow! That is just a whole lot of icing on the top. Beautiful job! (Of course, if I had paid attention to the clue for PUPA [Life stage originally represented by the circled letters, prior to metamorphosis], I would have cottoned on to this a lot sooner.)

I had a tough time in the lower left section with CHURL and ENDURO, but I eventually sorted it out. OUTGAS [Release vapors into the air] is one I’ve never heard of and sounds made up. But that’s all the questionable stuff I can come up with, which is fairly amazing in a 21x grid. 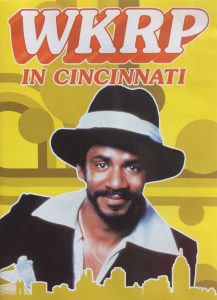 Aside from the good cluing in the themes, these others stood out to me:

This was a fantastic puzzle from every angle and from start to finish. I’m going with the full five stars! 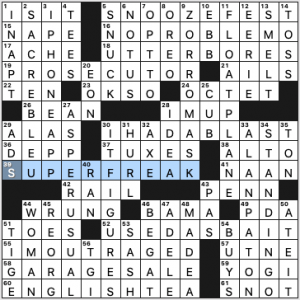 I did enjoy some things in this puzzle—Rick James’s SUPERFREAK, the linguistically erroneous NO PROBLEMO, SNOOZEFEST (napping festivals should absolutely be a thing), the retro shout-out to Hercule Poirot’s “SACRE BLEU!” (I read a lot of Agatha Christie as a tween), “IT FIGURES” (despite there being two other IT entries), and STANDING O with a cute clue, [Rapturous reception for Oprah Winfrey?].

But there was a larger number of questionable entries that shook me out of my groove, mostly phrases. IS IT and ATE IT. I’M UP, I HAD A BLAST, I’M OUTRAGED (if that last one is fair game, then you could basically make a case for 100 other adjectives to follow I’M). Plural UTTER BORES feels off. USED AS BAIT also feels a bit arbitrary to me, like I’M OUTRAGED. ENGLISH TEA without the word breakfast in the middle doesn’t ring a bell. “OK, SO” doesn’t strike me as the sort of phrase that is common enough to work as crossword fill, and the clue, [“And this affects me … how?”], doesn’t seem to bear on the answer too directly. I really wish constructors would try to avoid UTNE, because it’s got such a small footprint in the media world. And I don’t know what NOT US is doing in a crossword. ZORRO MASK is colorful, but the movie The Mask of Zorro makes the word order feel wrong to me.

Three stars from me. Here’s Rick James to play us out. 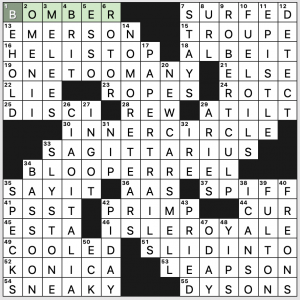 Got through this one quickly. It is time to start trying to get some speed back, since the ACPT is coming quickly! This is a wonderful wide open grid by Joe, and when the solve doesn’t take too long, that means that a lot of the answers, even the longer ones, are not too obscure or difficult. Another enjoyable LAT solve; 4.5 stars.

In my comments, I will concentrate on the longer answers that intertwine in the middle: 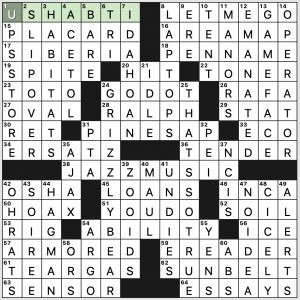 The first thing I noticed about this grid is the left-to-right symmetry. The second thing I noticed is that I didn’t know a single answer! I stared at a blank grid for about 3–4 minutes at the beginning of this solve. But I paused the timer, walked away for a bit, and when I came back answers just started to fall into place. Isn’t it interesting how the human brain works? I still enjoy that sensation of having your brain work, so much so that I have not even the slightest desire to try drug or alcohol abuse to get through life. Puzzles are my drug! I am sure I am not alone among people on this blog!

Anyway, still another great Greg Johnson puzzle. A solid 4.6 stars for this one. Here are some comments:

I’ll stop there! Have a great weekend!