I didn’t grok the theme until I got to the revealer, which is at the bottom of the puzzle as all good revealers should be. It’s a solid Monday theme. 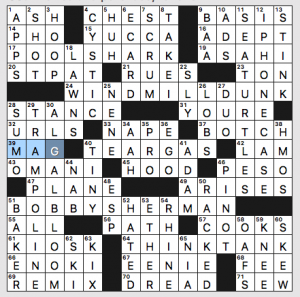 And the revealer: 64a [Research institute … or, when read as a direction, a hint to the ends of the answers to the starred clues], THINK TANK. SHARK TANK, DUNK TANK, GAS TANK, and SHERMAN TANK. Nice.

I have to wonder about the “breakfast test” when I see CYSTIC fibrosis and TEAR GAS in a puzzle. Neither is pleasant.

What I didn’t know before I did this puzzle: that General Mills has been making KIX cereal since 1937, and that the RHINE arises in Switzerland.

THEME: The last word of each theme answer is a synonym for SAY 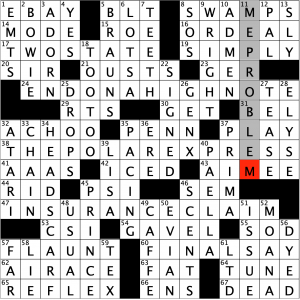 This was fun, easy puzzle that was enjoyable to solve from start to finish. Some nice long theme answers and a reveal that fit everything together really nicely.

Some great bonus fill as well ME PROBLEM was hands down my favorite – but this was a really solid grid all around. I was able to smoothly glide around the puzzle from one section to the next with those themers combined with nice long fill allowing for a lot of breathing room to let the puzzle sing.

Favorite clue goes to REFLEX [Thoughtless action?] – and as a pink-haired person, I appreciated the clue for DYED [Like pink hair].

Some MOANA to start the week off right

We’ve got a fantastic offering from Anna Shechtman this morning! The marquee entries are fun, the grid construction is interesting, and the fill is mostly pretty solid. The only part of the puzzle that put up any significant resistance was the NW corner (more on that below), while the rest of the grid fell into place pretty smoothly. 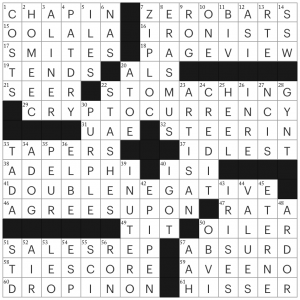 The marquee entries of CRYPTOCURRENCY and DOUBLE NEGATIVE were both pretty fabulous. First of all, who knew there were so many kinds of CRYPTOCURRENCY? I’ve heard of bitcoin, and one made out of pictures of cats (?!), but I’d never heard of Dash or Ethereum, and initially I couldn’t for the life of me figure out what united those two seemingly unrelated words. The clue on DOUBLE NEGATIVE was also great (This isn’t not one)

I also loved the construction of this grid; having six (!) black squares chunking off the NE and SW corners is highly unusual, and gave Shechtman an opportunity to show off her fill-skills. The three-letter entries that made up those corners are largely great (STD and ROG being two exceptions), and it just looks cool.

I did not particularly enjoy the NW corner, largely due to the unnecessary Trumping at 1A. CHAPIN, while certainly an unusual word, could have been clued entirely without reference to a Trump of any kind. Mary ___ Carpenter comes to mind. I also had never heard of an A-LINER, but now that I’ve googled them, I realize they are kind of adorable and whimsical?? I am now ok with that entry.

Overall, loved it. Many stars from me. 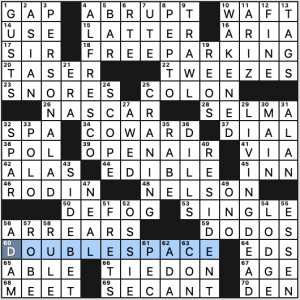 Works for me. Simple and clean. All of the theme answers are solid, and all of the “space” phrases are valid.

Nice fill all around with the likes of AL FRESCO, SIDE BET, TWEEZES, and plenty of strong 6’s: ABRUPT, NASCAR, COWARD, EDIBLE, NELSON, SECANT. In all the fill, only RABE [Broccoli ___ (leafy vegetable)] strikes me as on the more challenging side for a Monday.

One clue of note: SINGLE is [Unmarried], but the new term, coined by actress Emma Watson, is “self-partnered.” Look for it coming soon to a crossword near you.

Either I’m missing something or this is a very thin theme. It appears to be three-word phrases where the middle word rhyme. 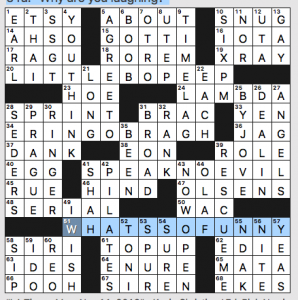 What I didn’t now before I did this puzzle: I got nothing. I am amused to have finished the 11/11 puzzle in 2:22. Maybe I should play the lottery.