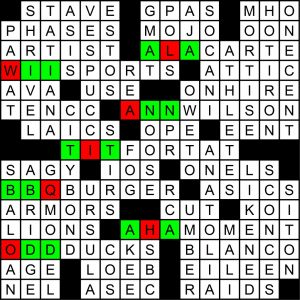 Title: “How Romantic!”
Prompt: The meta for this puzzle is a song from the ’70s.
Answer: “Two Out of Three Ain’t Bad” by Meat Loaf

Puzzle was fun but tough — don’t remember my time but it was high. Wide-open with big corners but without immediately obvious theme entries. Great fill/theme included GQ MODEL, ODD DUCKS, TIT FOR TAT, ANN WILSON, VESPUCCI, CITY BOND and WII SPORTS. Needed some glue to make it all work, like AKEE clued as [Tropical tree that rhymes with “tree”] but overall the dreck was worth the grid.

Now what? As I scanned the grid, the idea slowly began to take shape. Chain of thought was:

1) There are a lot of longish acrosses. Seven in total of 8 or 9 letters in length. Doesn’t mean much, but let’s keep looking.
2) Each of those is multiword. Again, doesn’t mean much, but let’s keep going.
3) The first word in each of these is exactly three letters long. Interesting — that might not be a coincidence.
4) Each of those three-letter words contain a certain letter exactly twice. Unlikely to be a coincidence now, so let’s list them:

5) Those doubly-represented letters spell out, from top to bottom, AIN’T BAD, meaning our contest answer is Meat Loaf’s cheesy-but-probably-not-meant-entirely-seriously ballad “Two Out of Three Ain’t Bad.”

I thought this was an excellent meta (it’s a bit easy for November, but let’s judge it on its merits instead of on expectation of difficulty). The idea is clear, uses a novel mechanism, amuses the solver, and points unambiguously to the meta answer. This is close to my beau ideal of what an easy meta should be, so 4.65 stars.

Actually I see that this is playing tougher in general than it did for me: with just an hour to go before deadline, we’ve only got 161 correct responses. So maybe this is a SAD meta (Simple And Difficult) instead of just an easy but elegant meta after all. I also see we need to ding the puzzle for using A LA, which is two words, when all the other are one word. Is BBQ one word, though? So I guess it’s most accurately described as “the three-letter lexical chunk that begins each theme entry contains two of one letter and one of another.” Didn’t notice it while solving so not a big deal I think.