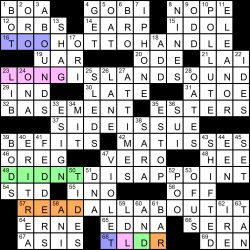 Hello there, everybody! Hope all is well with you and, given the temperature projections the next couple of days, bundle up!!

Today’s grid features a theme reveal that I’m sure a number of you might have uttered when reading one of my blogs here on Fiend!  The first four theme entries are phrases or nouns in which the first words of each can be combined to explain the recently popular shorthand TL;DR, or “too long, didn’t read” (68A: [Texter’s response to an overly-worded message (it’s spelled out at the starts of 16-, 23-, 49- and 57-Across)]).

Did not expect to be inspired after solving a clue in today’s grid, but that was before I read the clue for ELEANOR (11D: [Roosevelt who said “You must do the thing you think you cannot do]). And extra points given for the Africa reference with ERITREA (40D: [Red Sea country]). There might have been one other time in which I remember seeing the avian-related clue for ANI, so, despite its short entry, took the crossings for me to get that (58D: [Blackbird]). At least the clue to MATISSES let me in on a couple of works in which I did not associate the artwork with its title until today (42A: [“Bathers with a Turtle” and “Blue Nude,” e.g.]). I’m sure there are a number of times solvers end up having an earworm when coming across a musical clue, and solving OF US should leave a number of people with the pleasant voice of Bill Withers in your head for a few minutes (53D: [“Just the Two ___ (Bill Withers song)]).

“Sports will make you smarter” moment of the day: LANE (10D: [Swim meet assignment)]) – It is not a stretch to say that NFL great Dick “Night Train” Lane was the greatest defensive back to ever play pro football. Playing 14 seasons from 1952 to 1965, Lane finished his career with 68 interceptions, with 14 of those coming in his rookie season for the Los Angeles Rams. (Those 14 interceptions in 1952 remain a record for INTs in a single season.) Lane, who also played for the Chicago Cardinals and Detroit Lions, made the Pro Bowl and was named a first-team All-Pro seven times, and he was enshrined in the Pro Football Hall of Fame in 1974.

Jim P. here sitting in for Nate who’s out on assignment.

RAISE THE BAR [Set a new standard, and a hint to the circled letters] at 26d tells us that the circled letters in the long Down answers have to do with the word “bar.” And indeed, each of the hidden words (going upwards) can precede “bar.” 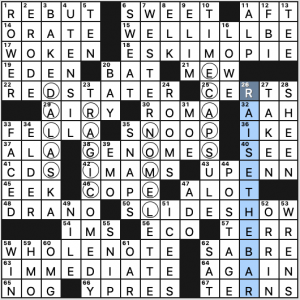 Works for me. Not overly thrilling, but not bad either. Strong theme answers.

Where the puzzle really shines is in the long fill: “WELL I’LL BE!”, ESKIMO PIE, RED STATER, GENOMES, SLIDESHOW, WHOLE NOTE, and IMMEDIATE as well as UTENSIL and POSTAGE. There’s a little bit of clunkiness in ELIM and TERR, but as abbreviations go, it could be worse.

Since I’m sitting in for Nate, let’s look at the female-to-male ratio in the grid. For the guys there’s IKE, Rob LOWE, fictitious MOE, ORRIN Hatch, a generic FELLA, and clue references to J. Edgar Hoover and no-show Godot. For the women there’s…*sound of crickets*. Not a one. Not even a reference in a single clue. Wow. That’s not good. It could be a whole lot better with a few changes to the grid, I’d bet.

That issue aside, the puzzle works quite nicely. 3.5 stars after I take off a couple decimal points for lack of female representation. 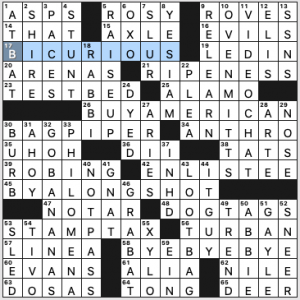 The constructing duo are making their joint debut with this puzzle (Jakob has published before), so it’s cool that they wrangled OVEN MITTS, VIDEOCHAT, GO BANANAS, and the heartbreaking PHILOMENA into their grid.

Did not know: 23a. [Experimental setting, as for a new initiative] is a TEST BED, apparently.

3.75 stars from me. You’re off to a good start, Gabrielle and Jakob! 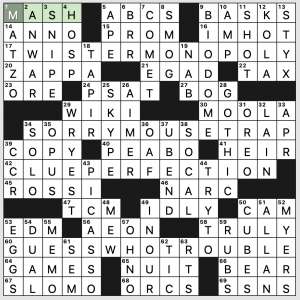 A little bit of a delay for me today; we got 8 inches of snow last night, and it is still snowing! This puzzle brings back to mind board games that I used to play! Not surprising, though, since Matt is around my age. Here are the theme answers so you know what I am talking about:

Very nicely done! All of these are common games from when I was a kid! Maybe I should play these with my 7 year old son, but I am still knee-deep in Puzzle Boat 6! I am sure something like this theme may have been done before, but this was a fresh take on it in Matt’s inimitable punny style. A solid 4.7 stars for this one.

That is all for this week! 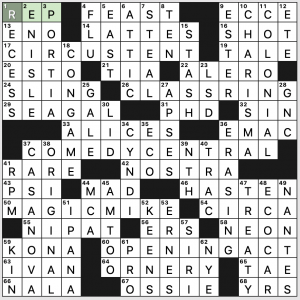 This is a new name to me, but Kurt Krauss’ byline was in the database, so this is not his first rodeo. The trademark LAT revealer is at the end of the themers:

Nice! I like how this, like many of these types of puzzles, leaves you hanging a bit until the payoff at the end of what the theme is.

That is all! Everyone have a great week!