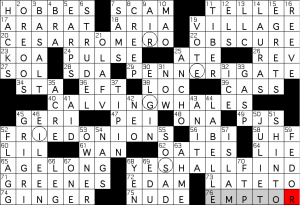 hello and welcome to episode #597 of matt gaffney’s weekly crossword contest, “Solving in Pairs”. this week, the instructions tell us we are looking for a famous duo, one of whom was born in 1953. oddly specific! what are the theme answers? well, there are five long across answers in this curiously non-square 19×13 grid, but those weren’t the first ones that caught my eye. no, based on the title and instructions, i noticed these across entries in the corners:

all right, so the fourth one probably isn’t theme-related, but the fact that there are five long theme answers suggests that maybe there are two other hidden pair members among the fill. meanwhile, what do we do with the three we have? well, let’s take a look at those long answers:

i couldn’t immediately see the others, but the fact that those extra letters spelled out _EGI_ strongly suggested REGIS, so i was able to guess that the operative YE SHALL FIND was (S)HALL, the partner of {“We Were the Mulvaneys” novelist Joyce Carol ___} OATES. (well, not that OATES, of course, but a different one.) there were more R choices in CESAR ROMERO to consider, but certainly ROMEO is part of a famous pair, and {Dr. ___ Burke (“Lost” role)} JULIET is in the grid (unlike the others, this is a down answer rather than an across). i did not know the lost character, but now that i think about it, there aren’t any famous non-fictional JULIETs (spelled that way) coming to mind.

anyway, where does this leave us for a meta answer? well, here’s where the birth year stipulation is necessary, because both regis & kathie lee (gifford) and regis & kelly (ripa) are plausible pairs, but only kathie lee was born in 1953, so that’s our meta answer.

this meta is very, very good. it’s clear enough from the title and instructions what to start looking for, but not all of them are in plain sight, and i liked the fact that i was able to work back and forth from the ones i could see and my guess at the answer. it’s a very nice touch for an early-in-the-month meta that the connection between the hidden partner and the theme answer did not involve any anagramming, just a letter insertion somewhere. about the only (slightly) weak point i found in the meta construction was “ginger & fred” (or fred & ginger), a pair that i do not normally think about using specifically those names; usually they are both first & last names as a pair in my mind, unlike the other four pairs (and, for that matter, the meta answer) which are all frequently referred to by one name per person: romeo & juliet, penn & teller, calvin & hobbes, hall & oates, regis & kathie lee. i wonder if something like SONNY in the fill and CHERI OTERI would have been a better choice for the I.

nevertheless, this was a very nice meta and just about perfectly pitched for a week 2. thanks, matt!