I didn’t suss out the theme during the solve, but it’s cute. BROKEN PROMISE (34a, [Certain moral lapse, and a hint to what’s hidden in this puzzle’s theme answers]) suggests we need to look for a hidden word spanning across the pairs of words in each theme answer. Except it’s not just one word we’re looking for, it’s the hidden phrase “I DO.” 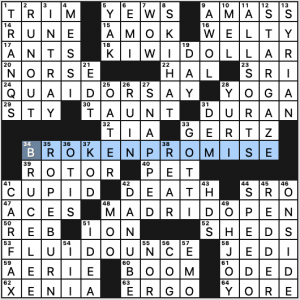 So I was unfamiliar with three of the four phrases, but they’re all crossword-worthy, and I liked that challenge and the theme as a whole.

On to the fill. Who among you also put down A VILLAGE for 11d [What it takes, so they say]? I was ready to ding the puzzle for that long partial, but ALL SORTS makes for somewhat better fill. STARGAZE, BRUCE LEE, and ROPE BURN are all great bits of fill, needless to say.

In the minus column we have SRI and SRO, questionable HDS [Most current TVs], weird past-tense verbs KOD and ODED, and proper name crossing of GERTZ [Jami of “The Neighbors”] and GOTTI. That last one probably isn’t too much of an issue since most people (at least, among American solvers) know [“The Teflon Don”], but I could be wrong.

Cluing was mostly of the straightforward variety except for the likes of [Company whose products appear in many stories]. This turned out to be OTIS, the elevator company.

Good puzzle which put up a little bit of a fight in a good way. 3.7 stars. 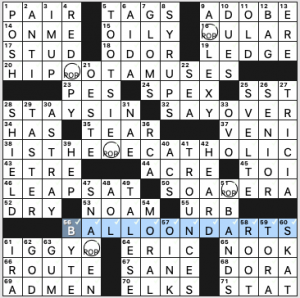 Gonna go out on a limb here and surmise that Will et al. have decided the answer to a surfeit of submitted/accepted rebus puzzles is to circle the rebus squares and run some puzzles on Wednesdays rather than Thursdays.

The theme revealer is 56a. [Carnival projectiles that might be directed at parts of this puzzle?], BALLOON DARTS. I’m not sure the themer is an actual thing. There are balloon dart games at carnivals, yes, but they are dart games in which regular darts are thrown at balloons, rather than games in which balloon darts are thrown. The rebus squares are all circled to resemble balloons (not just circled to make the puzzle Wednesday-easy), and each contains the letters POP. The entries that include the rebuses are: POPULAR / APOPLEXY, HIPPOPOTAMUSES / RED POPPY, IS THE POPE CATHOLIC / TOOTSIE POP, SOAP OPERA / POP BANDS, and IGGY POP / SNAP OPEN. That’s a lively batch of phrases, all right.

I do not at all know IGGY POP’s music, but I adore him after reading this recent New Yorker profile. Smart and interesting guy.

Eyeballing the tally of straight white men in the puzzle vs everyone else, we find Caesar, Chomsky, Iggy Pop, gendered ADMEN (ugh), Verdi, Richard Nixon, a king with a TASTER, Gay TALESE, One Direction (80% white) and OneRepublic, and John Huston; they’re up against just cartoon DORA and [Nixon daughter] TRICIA. Bzzzzt! Try harder.

THEME: A quartet of the stringed objects make up the theme answers in this grid 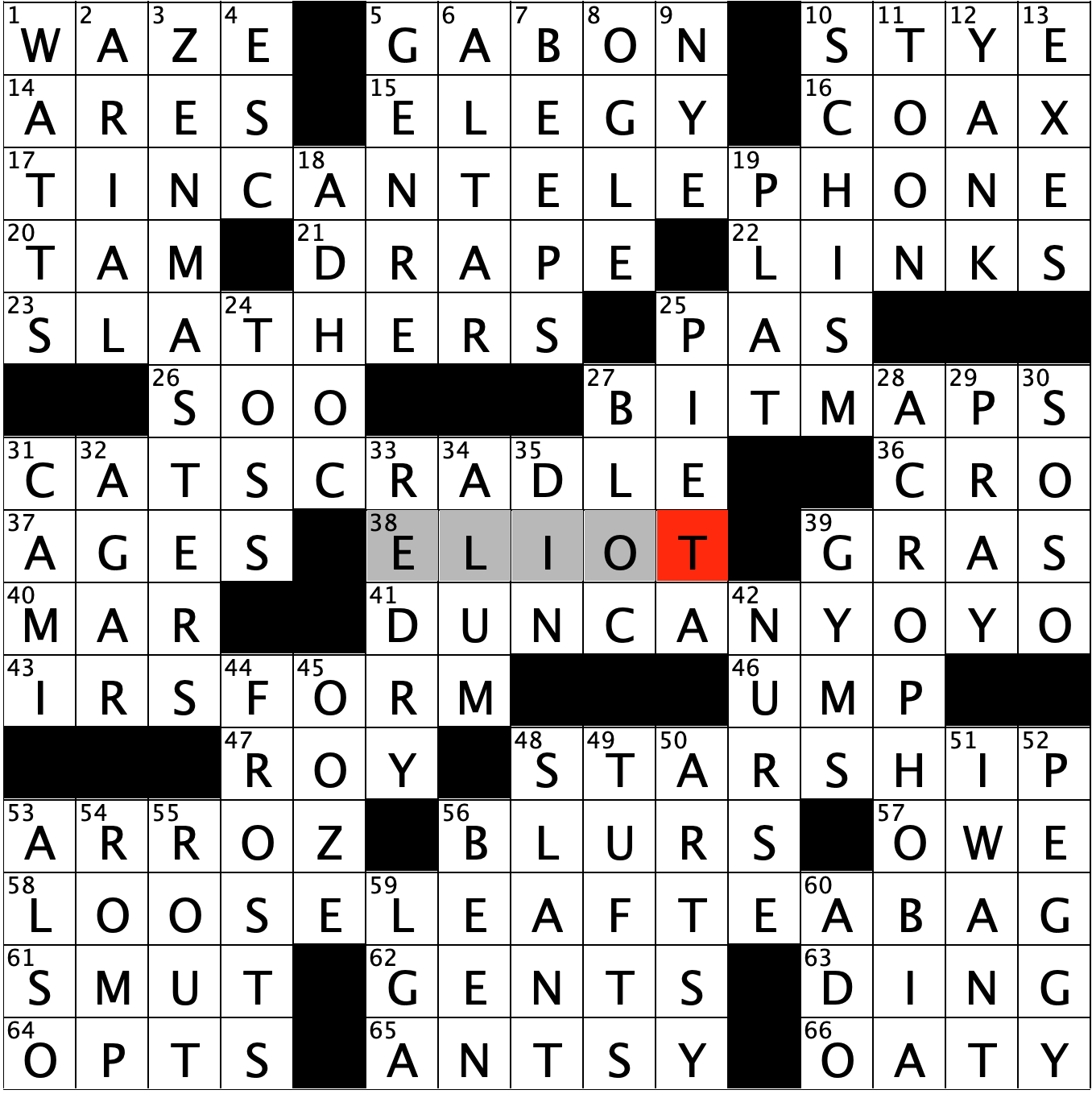 I liked this theme as I solved, but after the fact, noticed that LOOSE LEAF TEA BAG feels a bit out of place. While still a stringed thing, the other theme answers are all childhood games, so it sticks out a bit. I also needed every single cross to get the DUNCAN part of DUNCAN YO-YO, despite being an avid player in my youth.

The C in the ACROPHOBIA/CRO crossing was very much an educated guess and not something that came easily, but so much of the lovely fill outside of that crossing made up for that spot. Finding entries like STARSHIP, I WANT, SCHISM, ZEN MASTERS, and SLATHERS around the grid kept the solve entertaining.

I got stuck on WATTS [Bulb units] for a moment, as before solving this puzzle, I had witnessed the planting of some tulip bulbs and couldn’t get a non-flower thought out of my head initially – perhaps as a way to will warmer weather into coming back. Clue of the day goes to GYMS [Elliptical buildings?]. 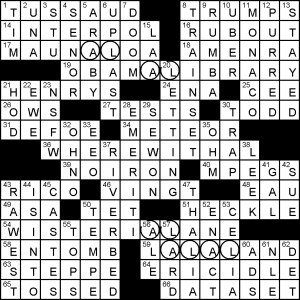 Today’s puzzle by Gary Larson has an interesting and clever revealer, WHEREWITHAL, which is placed right in the centre. Four WHEREs – place real, fictional, or even metaphorical – have the digram AL between their two parts. It’s an interesting choice to vary the WHEREs so wildly. AL is quite a slight letter pattern to hide, but the consistent positioning strengthens that aspect somewhat.

Strangeest clue: the OBAMALIBRARY is clued in the present tense as [Place for memorabilia…] but seems to be under construction.

For some reason, I wanted [Like some dress shirts] to be IRONON or some kind of ON but it’s NO/IRON. Okay. Also wanted the R of P.R. to be rata as in pro rata not Puerto RICO.

I will likely be turning out for our 8-a-side cricket team on Sunday. I hope I won’t be UPLAST (but odds are good), but I certainly won’t be [Batting ninth]. 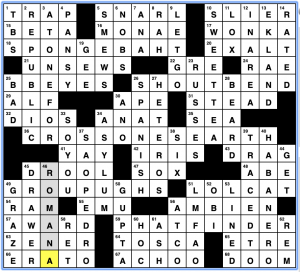 BEQ has this week’s AVCX, and I’m ready to dig into it ASAP:

And that’s it!  The H in one of the words from each phrase – its “goalposts”, per the title – have been moved.  We’ve got SPONGE (BATH), (SOUTH) Bend, CROSS ONE’S (HEART), GROUP (HUGS), and (PATH) FINDER.  It took me writing that out to pinpoint exactly what was going on here – highly specific anagramming is tricky to identify, it turns out.

If you give me a chance to post a video by 2010 ASCAP Vanguard Award winner Janelle MONÁE, I will take it.