On Saturday, Jeff Chen teamed up with solver extraordinaire David Plotkin for the latter’s crossword debut. Today, Jeff works with longtime behind-the-scenes crossword documentarian, Nancy Shack, to give us her WSJ debut. Nancy is often the one to bring us ACPT photos, and she somehow always finds the links to articles in the world at large whenever crosswords or puzzlers make the news. Plus, I’m sure she does a lot more for crossworld that I’m not cognizant of.

Their theme today boils down to a simple letter-change endeavor where Gs become Qs. 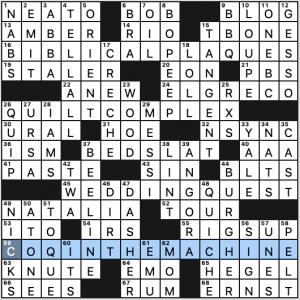 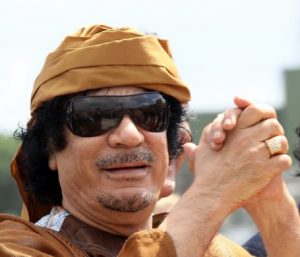 I don’t normally think of a letter-changing theme as qualifying for Thursday-level trickery, but I suppose the difficulty is raised here somewhat by the introduction of all those Qs. And I have to say the themeset is pretty exhaustive since there aren’t many words or names that can swap Qs for Gs. Still, I always hope for something surprising on Thursdays. That’s not so much a knock on the puzzle as it is its placement on a Thursday. 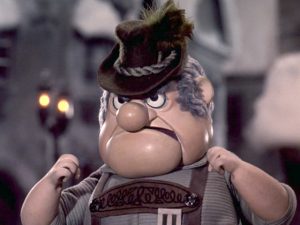 In the fill, the Qs don’t result in too much weirdness. We get BBQ, QUIP, a lovely QUICHE, and a TOQUE. Elsewhere, TELL-ALL, EL GRECO, NATALIA, and BEELINE are nice. I didn’t know the definition or spelling of BURGHER [Member of the middle class], but that’s a fun one to learn. Lots of potential for puns there. Of course, I couldn’t not think of the Rankin and Bass villain, Burgermeister Meisterburger upon filling that one in.

Cluing felt fresh and interesting, including these:

Solid-enough puzzle though it’s not as flashy as Thursday offerings often are. But all in all, a nice debut. Congrats, Nancy! 3.6 stars. 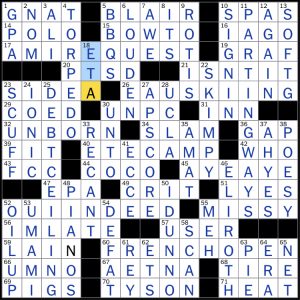 Getting a grip on today’s NYT was tricky – I had ideas at what Alex Eaton-Salners was cluing at, but the letters I had in the grid from the down crossings didn’t fit.  Eventually, it slid into place:

(This is where my brain goes when I see Steffi GRAF in a grid.)

Elsewhere in the grid, I enjoyed learning that AYE-AYE is also a type of lemur, that MISSY Elliott has won multiple Grammy awards, and seeing ELI ROTH’s acting turn in Inglorious Basterds get a shout-out in the cluing.  I also dug TORPEDO, PARTING WAYS, DEBT CEILING, as far as the longer down fill goes.

This appears to be a vowel-progression theme, but the title suggests there’s something else going on that I’ve missed – or maybe I expect more trickery from Peter than this puzzle gives us.   I was missing something! Each theme answer has the six-letter string W*NDER, with a different vowel in each example marching through A, E, I, O, and U. Thanks to commenter BarbaraK for enlightening me. 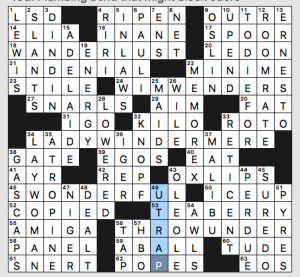 Still not my favorite Fireball but a whole lot better than I initially thought.

What I didn’t know before I did this puzzle: that there’s an A–BALL team called the Lansing Lugnuts. 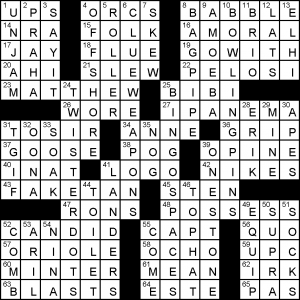 Not a unique theme (are there any still?), but definitely an interesting one. It features clue/answer reversal, which is often irksome, but today has some extra effort. I thought all the counts – of (24)TWISTERDOTS, (6)CLUEWEAPONS, (25)BINGOSPACES and (10)BOWLINGPINS – must be the same initially, but instead they each incorporate the number of their down clue! I am under the influence of codeine headache tablets, however. Yeah, that’s it!

The constructor name is unfamiliar to me. Some design decisions could have done with feedback from a mentor (or editor). The Scrabble-fucking in the UNJAM and EQUIP don’t add to the puzzle, they just add dross. PELOSI, TOPHAT and IPANEMA are choice nuggets though.

Brendan Emmett Quigley crossword (No. 1209), “Party Till You Puke”—Ade’s take 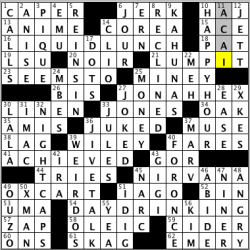 Brendan Emmett Quigley crossword solution, No. 1209: “Party Till You Puke”

Hello there, everyone! Apologies for the late arrival, but we do hope you all have enjoyed your solving experiences so far in getting ready for the weekend!

It’s Thirsty Thursday (well, at least some people all it that), which means, as far as this grid is concerned, it’s time to get its drink on! Each of the four theme entries are phrases widely associated with times of the day when you might sneak in an alcoholic beverage…or seven!

The northwest corner was the last one to fall for me, especially since I needed a couple of crossings to finally make out ANIME for its clue (13A: [“My Neighbor Tortuto” genre”]). Also originally had “dials” for CALLS as well (1D: [Rings up]). Just noticed the “J” staircase formed with the first letters in the entries for JONAH HEX (27A: [Western comics antihero played by Josh Brolin in a 2010 movie]), JONES (33A: [Intense desire]) and JUKED (36A: [Did a fancy move on the field, say]). The latter of the three is usually mentioned in American football parlance, e.g. a juke move by a player carrying the football. Though it’s pretty dated, I liked the fill of LUMP IT (21A: [Eat your peas, informally]). Favorite fill in the grid is definitely JIVE TALK, and I only wish Barbara Billingsley was here to give us a lesson in such language (36D: [Cat’s lingo]). Well, speak of the devil! Here you go! You’re welcome…

“Sports will make you smarter” moment of the day: GIGI (43D: [Model ____ Hadad]) – One of the greatest American tennis players of all time, Puerto Rican-born Gigi Fernandez won 17 Grand Slam women’s doubles titles, winning at least one Grand Slam title every year between 1989 and 1997, save for 1989. Fourteen of her 17 women’s doubles titles came while partnering with Belorussian Natasha Zvereva, with those 14 titles being the second-most doubles titles by a team in Grand Slam history, only behind the legendary duo of Martina Navratilova and Pam Shriver. Along with the Grand Slam wins, Fernandez partnered with fellow American Mary Joe Fernandez to win back-to-back Olympic gold medals in 1992 and 1996. In 2010, Fernandez was inducted into the International Tennis Hall of Fame along with Zvereva.

Thank you so much for your time, everyone! Going to have to decrease the chances of being here next week. Probably 55.9 percent at the moment. But, as always, will try my best to make it here in a timely manner!