Today we have a challenging but fun before-and-after theme involving world capitals and criminals. The last syllable of each world capital is a homophone for the first word of a type of criminal. This is hinted at with the revealer CAPITAL OFFENSE at 114a [Lawbreaking with serious consequences, as committed in the theme answers]. I didn’t think too heavily about the meaning of the revealing phrase, though if I did, I might’ve thought it was a bit too grim to be the basis for a puzzle. 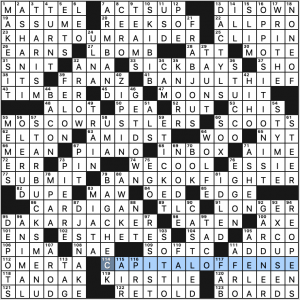 I found this to be fun despite the obvious spelling challenges and having never even heard of Banjul.

Speaking of Banjul, I wonder if that J crossing at FRABJOUS as well as the L crossing at DACTYLS caused people grief. And there’s the N crossing at KNORR as well, so I wouldn’t be surprised if people Naticked in that area.

Other toughies in the fill include DJ SNAKE (the J was my last letter in the grid) OLERUD, and TAN OAK. I didn’t know ESSIE [Big name in nail colors], but I should probably learn it. BAG CHECK was also tough to parse given that opaque clue [Going:___:: coming:carousel], but it provided a nice aha moment once I realized what it was.

Overall, I loved the fill, especially some of the more modern touches like “WE COOL?” [“Everything okay between us?”] and L-BOMB [Word that takes a relationship to the next level, slangily]. Other goodies: SICK BAYS (though it’s odd in the plural), MOON SUIT (though “space suit” is probably more common), CARDIGAN, ASHANTI, ARMBAND, STUCCO, GET DOWN, and STYMIE.

Final note: It may just be coincidence, but a puzzle titled “Crimes Against the State” and with a CAPITAL OFFENSE theme reminds me of those in our own Capital causing offense. I am of course referring to the impeachment inquiry and the guilty verdict of Roger Stone. Chalk another one up for the good guys! 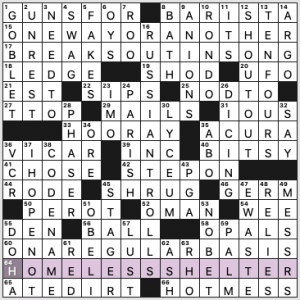 Quick recap tonight, as I am tiiiiired. Grid features two pairs of 15s, all solid: ONE WAY OR ANOTHER, BREAKS OUT INTO SONG, ON A REGULAR BASIS, and HOMELESS SHELTER. This would play better if HOMELESS SHELTER were the second 15, so the set of four 15s would read as a sentence (or a wordy headline). 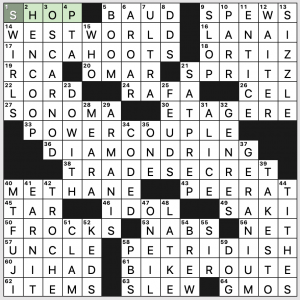 I thought this was a beautiful grid! I don’t often say this, but this one seems esthetically pleasing. I am sure I have seen this layout or something awfully similar before. Maybe it is because my glasses are broken and I am not seeing straight! I am going to try and hit the eye doctor’s office today! I don’t think I have had the pleasure of meeting Debbie Ellerin, but I would love to so I can tell her in person that I enjoy her puzzles. This was a great puzzle, and while not too difficult, it was just thorny enough to add to the enjoyment. A solid 4.6 stars from me today. Debbie, are you going to the ACPT?

I have to finish my Puzzle Boat 6, so I will stop here! 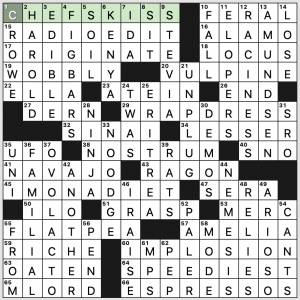 Almost 20 minutes for me this week, but I will take it. This one definitely “stumped” me, and I may or may not have learned a new word or two. This was not annoyingly difficult, but I did have a moment or two where I thought I might not finish! I finished in the lower left corner, which does seem like the thorny part of the grid. But all in all, a fun puzzle. A solid 4.4 stars from me.

As mentioned above, I have puzzles to do. Have a great weekend!