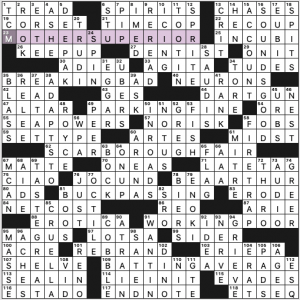 The theme is phrases reinterpreted as if the last word is a teacher’s assessment of the first word’s quality, and the clue assigns a corresponding letter grade:

Two entries popped up here, and I’d commented on them in other recent puzzles. 45d. [Metro areas, informally], URBS—still wondering who’s jabbering about urbs in their informal chats. And 51d. [The other guys], NOT US—a weird phrasal entry that I feel is newish and unwelcome.

117a. [Afterword], ENDNOTE. Say what?! Endnotes are like footnotes, citations that appear at the end of a book rather than at the bottom of the pages where the info is cited. Afterwords are epilogues, not endnotes. So say us all.

Time to cook dinner. 2.75 stars from me, wanted more freshness.

Each of the theme answers adds ATE to a base phrase. Wackiness results. 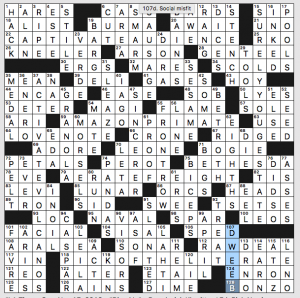 All the base phrases are solid and most of the altered states are pretty funny. A nice Sunday theme.

What I didn’t know before I did this puzzle: that ARIES is a fire sign.

THEME: Phrases with two-letter abbreviations are interpreted as if they are two-letter words instead, clued wackily.

Eye roll after gleeful eye roll for me. The themers are so absurd (and equally so!) that it works quite well.

Grokked the theme easily at ID BRACELET and filled in steadily moving south from thereon in before going back to finish in the NW which I’d left largely blank. Couldn’t see UN-MEMBERS for what felt like forever, despite having the UN part.

Short write-up today- I have to go to my nephew’s birthday party, which he’s chosen to have at a paintball park. So I’m preparing to get my ass kicked by a bunch of 12-year-olds.

I got my piano tuned last week. Does anyone say they had it RE-TUNED? Well, I suppose if the first tuning didn’t go so well, and then someone tuned it immediately after… but still.