I’ll take “things than end in Y” for a Monday, Alan! 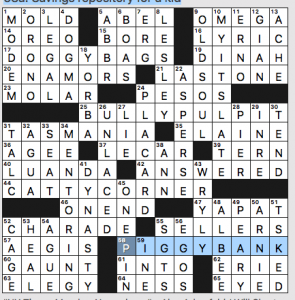 A simple, accessible theme for a Monday.

What I didn’t know before I did this puzzle: that LUANDA is the capital of Angola. If you play me in Learned League, you already know that geography is not my strong suit. 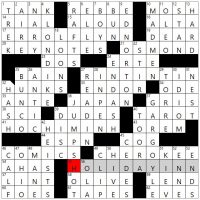 To be honest, I’m not 100% sure these are the theme entries. They’re the longest and they all have an “-in”-rhyming ending, but I’m not sure if there’s supposed to be another connection between these entries, aside from the fact that they’re all from a bygone generation?

I also kept wanting to stop solving this puzzle because of how relatively ancient it felt. When all of your theme entries involve pop culture from 50-70 years ago, you have to wonder who the target audience is for this puzzle. Let’s also not overlook ye olde pop culture like BAIN EDNORTON STAN BUNCO READIN HASH. Entries like Backstreet BOYS and MADMEN, though more modern, stick out like sore thumbs and seem reverse engineered into this puzzle to give it any modernity at all. To the extent that the only requirement for your theme entries were different “-in” endings, the sky feels like it could have been the limit here, even with more modern entries. I wish I liked the puzzle more, but puzzles like these are the ones that turn away the younger solvers that we need to keep crosswords going for future generations.

This was pretty hard! I especially struggled in the SE stack, although there were a few crossings scattered throughout that I just had to guess on. I always enjoy the pop culture perspective of Kameron Austin Collins’s puzzles, although we are rarely simpatico on cultural references. Still a fun puzzle, and as always I learned a lot, which is my favorite thing about doing New Yorker puzzles. I do have a few minor issues, but they are pretttttty minor. 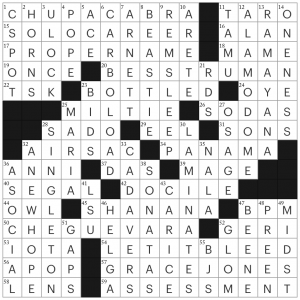 My solve was definitely not smooth on this one. After confidently throwing down CHUPACABRA at 1A, I plunked around in the North for while and made some progress, but when I got into that bottom stack, I absolutely ground to a halt. I think, for me, the North was easier because it had fewer PROPER NAMEs (BESS TRUMAN notwithstanding). But between GRACE JONES (who was before my time but who I have now googled and whose music, including the video for “Pull Up to the Bumper,” I immensely enjoyed) and CARICE van Houten and Geoffrey BEENE, I had a hard time breaking into that stack at all. I also don’t know the Stones album (oops), so… yes, that stack was hard.

Overall, this was a tough-but-fair puzzle with fabulous triple stacks and pop culture entries. Plenty of stars from me!

THEME: COLLEGE REUNIONS are separated in each theme answer 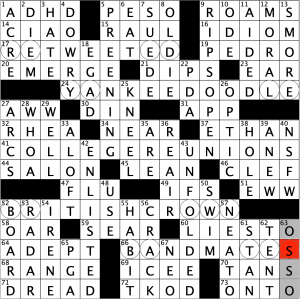 Quick write-up today – this was a good idea for a theme, and the puzzle overall solves very cleanly, but the randomness of the colleges here, along with the difference in how well known schools like YALE and BROWN are vs REED and BATES kind of put a damper on it overall.

Clues and fill here all felt fresh and made for a really smooth. Great clue for STAN [Overzealous fan, slangily] and the quartet of long downs RIPS OPEN, PREENING, ENLISTED, and UNFOLDED added to each area of the grid and made it fun to get through this puzzle.

I can’t tell if the title is a play on words or not. If it’s not, it doesn’t parse well. But the theme is two-word names and phrases that hide the six most commonly used top-level internet domains.

This is revealed (superfluously) by DOT at 69a [Punctuation that can precede each set of circled letters]. 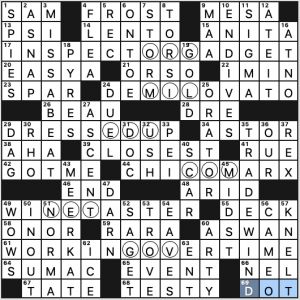 I like this theme. That’s a strong set of theme answers and fitting six longish answers in your grid is tough. Especially for a Monday puzzle.

Which is probably why we see more than the usual amount of kludgy fill: LENTO, OR SO, A SNAP, TORSI, plural ENDIVES, AT NO. And that’s just in the top third of the grid. It gets slightly better lower down, but that top third left a bad impression.

I did like MEERKAT, TRADEWIND, and MISS A BEAT, but that’s pretty much it for interesting fill here. Everything else is propping up the theme as best as possible.

I’ll put this at 3.1 stars. I enjoyed the theme, but it comes at a cost in the fill.

Another one of those days that I figured I was going to flounder around the grid before giving up, but nope! Luckily those days are becoming rare for me, and it’s now more of a sinking feeling that I’m doing my best to ignore. 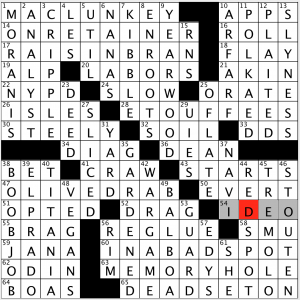 Starting off with MACLUNKEY in 1-Across was brutal. It feels like one of those things that you either know or you don’t, and I’m definitely in the latter camp (no idea who Greedo is…)

MORANIS was fun to see. He’s one of those actors I occasionally Google to see what he’s up to. His reasoning for leaving show business (and public life in general) at the height of his fame is quite interesting. Still, I miss that guy.

Other fun stuff included RAISIN BRAN (though it felt strange clued as a health food), ETOUFFEES (weird as a plural, but the word is already so strange to being with, and I find it delightful), EL PRADO, MEMORY HOLE, WAR GAME, IN A BAD SPOT, and BOOB JOB (which the juvenile in me figured out with no help from any crosses).

I’d be remiss if I didn’t gripe about the Absolutely Awful dupe in the SE corner. I thought for sure I had something wrong, but SPOT crossing SPOT? That put me in an awkward SPOT as a solver. The grid seemed lighter on obscure proper names than usual… maybe an apology for the dupe!