This is essentially the same puzzle that we saw from this constructor two weeks ago, except with PA taking the place of TR. Here, standard words and phrases that include a PA are re-parsed with a word break between those two letters. 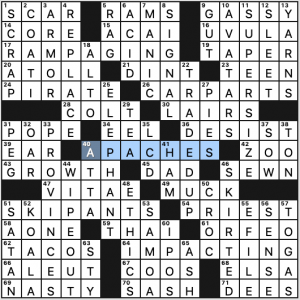 Other than the APACHES entry, the rest are better than the ones from two weeks ago. At least they have surface sense, and the humor is more on target.

But again, the title doesn’t do much to explain what’s going on here. At least last time, there was an effort (remember “T.R. oops”?) to explain why we were splitting T from R. Here there’s not even that. How is “PA System” a basis for this puzzle? Before we go down the road of making similar grids titled “AV Club,” “BB Gun,” “DH Lawrence,” and whatnot, how about if we limit these to those that are justifiable? For example, you could have a puzzle titled “Commercial Break” where you insert a word break between the letters A and D. That makes sense. I’m sure there are others that do as well.

The fill here is nice, especially SUPER-SIZE, WIPEOUT, ELEPHANT, AVATARS, and TRADE UP. And there’s little to complain about, so that’s a good thing.

Not a bad puzzle—certainly better than the previous version—but the title needs work. 3.25 stars. 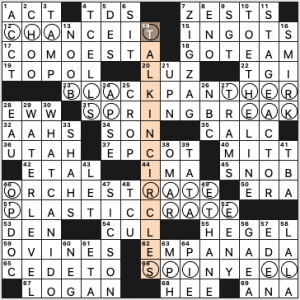 The theme revealer is the central Down answer, 14d. [Argue repetitively … with a hint to this puzzle’s theme], TALK IN CIRCLES. The six Acrosses that contain words and phrases whose start and end spell out words that are roughly synonymous with the revealer.

Not the usual theme idea. Erik is so incredibly creative.

Highlights in the fill: COMO ESTA, EMPANADA, ZIGZAG, “WHAT CAN I DO?”, and a classic STAGE ACTOR.

Didn’t exactly know: 46d. [Nonfiction film with a point of view, in brief], OP-DOC. It seems to be a New York Times term. If you want to watch some NYT op-docs—short documentary films conveying opinions, made by indie filmmakers and artists—check out that YouTube channel. 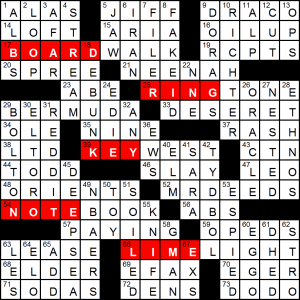 The best thing about this puzzle is the revealing KEYWEST. It’s a clever way to get to “KEY+___” for the first part of four phrases: KEY(BOARD)WALK; KEY(RING)TONE; KEY(NOTE)BOOK and KEY(LIME)LIGHT. Otherwise it’s a pretty typical theme of its type.

The theme takes up 41 squares by my account and the grid is quite blocked off otherwise. I am not sure why a puzzle with ALBS, RCPTS and EGER/DHED and EFAX (???) gratuitously in its corners and edges wasn’t sent back for another draft. ETHNOS was guessable but also seemed far from necessary or interesting. 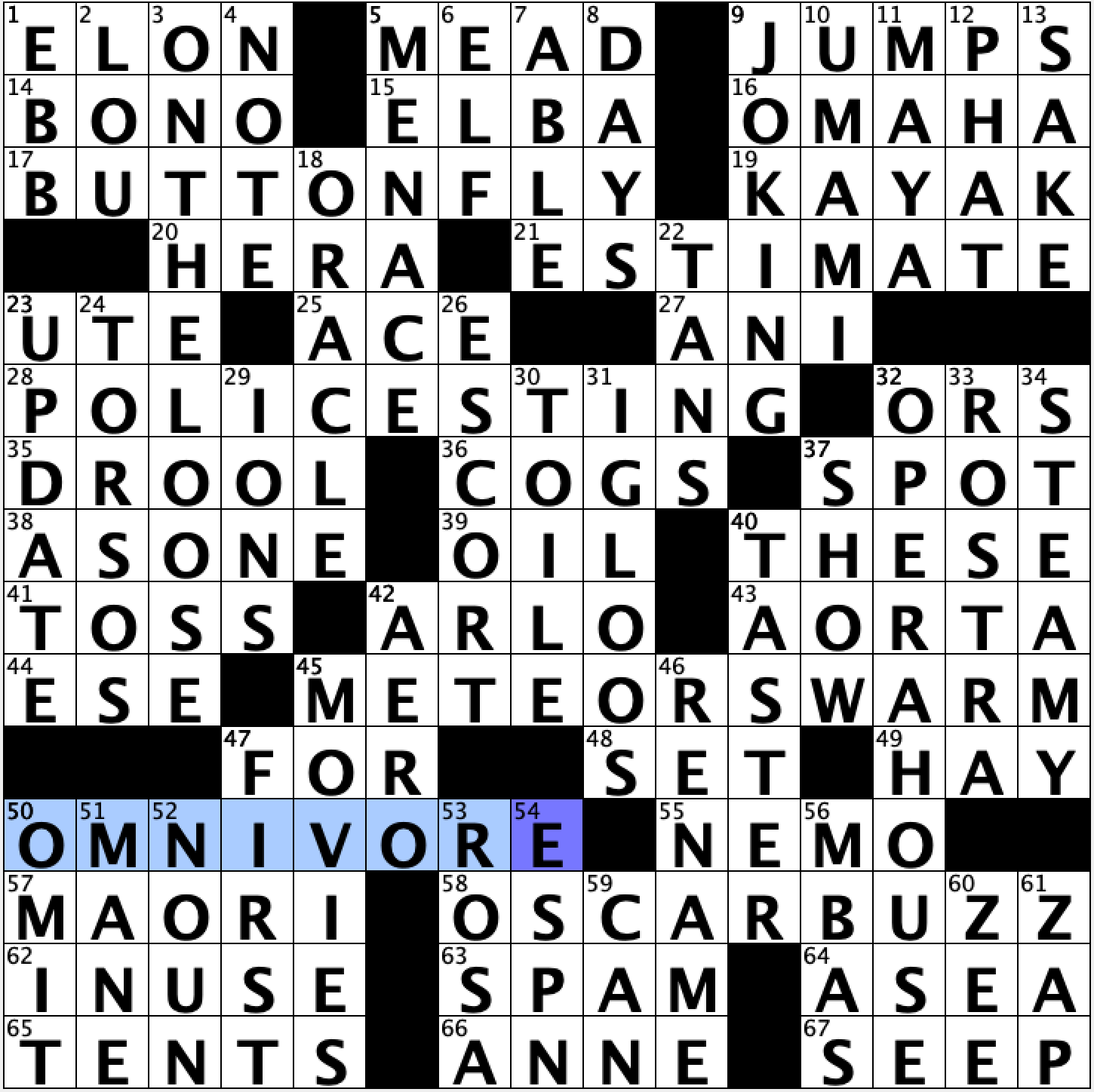 There was so much to love with this puzzle. Starting with a simple, but really well- executed theme. Even without reading the title (which at this point I’m sure you all realize I do not) I figured out the Bee theme fairly quickly into the puzzle. Before the puzzle, I was not familiar with METEOR SWARMs but google tells me they are real from both the astronomical side of things, as well as in D&D, so I’ll take it.

The fill here is also pretty fantastic – the grid is pretty scrabble-y, but there isn’t much crosswordese which is super impressive. Some great long non-theme answers in there like OPERA HOUSE, ON THE LOOSE, and OMNIVORE, along with the smooth construction and lively clues, made this entire puzzle such a pleasure to solve. 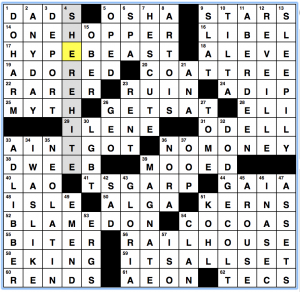 This week’s AVCX is a themeless from Victor Fleming, and boy oh boy, do Judge Vic and I have different pop culture wavelengths – I was in desperate need of some footholds on this grid:

Finally: I appreciated the Prince content across the center of this grid – “I Wanna Be Your Lover” is classic, as is its initial line of “I AIN’T GOT NO MONEY”