We haven’t seen one of these types of themes in quite a while—pretty much ever since the WSJ has had enough stock (haha) on hand to be able to run puzzles from outside constructors nearly every day. I could be wrong, but my suspicion is that Mike Shenk would rather run other people’s puzzles, but when his supply runs low, we’ll see one of his own creations.

I’ve only ever seen this theme type from Mike Shenk, but it works. The title tells us something is going to be split from something else. That something—in this case—turns out to be three-letter farm animals. 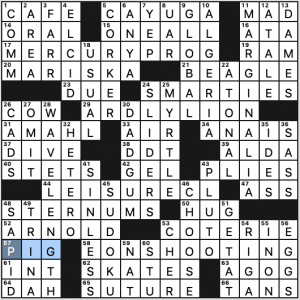 Yeah? Works for me. Not terribly exciting—no fun or funny wordplay—but it definitely helps with sorting out the rest of the themers, once you’ve grokked it. 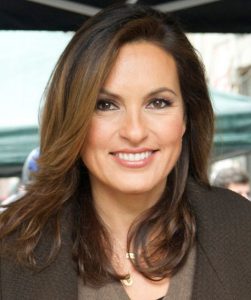 I had trouble in that COTERIE / PLUTO section but mostly due to the purposefully opaque cluing therein. Another trouble spot was the SAPID / TRINA stack in the SW since I’d never heard of either.

How did you do with MARISKA (20a [Hargitay of “Law & Order: SVU”])? This was a gimme for me. I’ve never seen the show, but somewhere along the line I’ve heard her name, and since my daughter’s name is Marisa and I sometimes call her “Marishka” (with a fake Russian accent), the actor’s name stuck in my head. 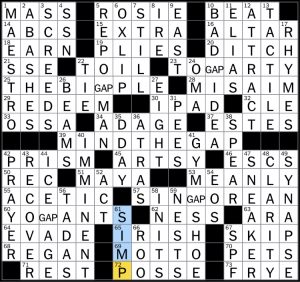 I feel like I’ve seen today’s NYT theme before, but I can’t find any record of it, so I may have just done a puzzle with a theme that’s similar.  It’s pretty straightforward, given how experimental/out-of-the-box Thursday NYT can get:

I really dig the down fill in the upper left and lower right columns here – MAESTRO (“Pit boss?”), ABASHES, and SCREEDS up top, and SNEAKER, CLARITY, and SYNAPSE (“It may get fired because of a thought”).  Elsewhere in the grid, I don’t know where in my brain I’ve been storing that pickle juice has ACETIC acid in it, but I managed to fill that in without any crossings.

I did this puzzle late in the evening following a long and weird day, the highlight (?) of which was realizing that the traffic jam on the way home was caused by the Planters Peanutmobile rolling along the highway. To be fair, it wasn’t really the Peanutmobile that was causing the slowdown. It was all the people who took their foot off the accelerator to look at the Peanutmobile. 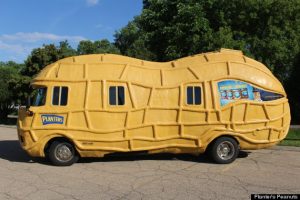 So the puzzle took me a bit longer than it would have on a Peanutmobile-free day.

The 7-letter stacks in the NW and SE are excellent. LOVE GILDA/I‘M AN IDIOT/MALL SANTA and KIA SEDONA/ESTATE CAR/STEVEDORE. They’re all perfectly legit fill with Peter’s usually lively cluing and the only one I recall seeing recently is MALL SANTA. Also loved the clue for I‘M AN IDIOT: [Duh!] which is the opposite of the Peter Gordon Trademark Very Long Clue. The best clue in the puzzle is 62a [Woodie, to Rushdie] for ESTATE CAR. 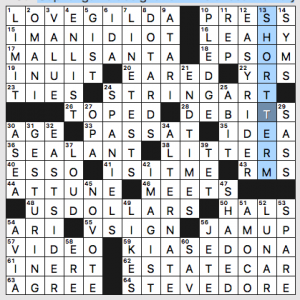 What I didn’t know before I did this puzzle: that SHORT TERM is the [Capital gains designation if held less than a year]. 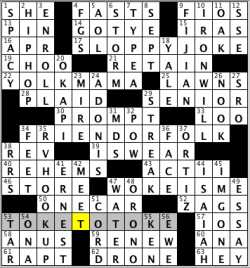 Good afternoon, people! Hope all is well with you as we’re one week away from turkey day!

I assumed that it was unlikely that today’s grid, given its title, was about either a breakfast cereal or the street name of a drug once popular in the rave scene (and now used as an antidepressant). The 14 x 15 grid features theme entries that are puns, with phrases and proper nouns reimagined when adding a “K” syllable to at least one of the words.

Took a while longer than I would have wanted to get the theme, as I initially put in “slurry joke” and, because of that, put in “wired” for what turned out to be TYPE A (7D: [Like one with a hyper personality]). Also was slowed by assuming an “est” suffix for the entry that turned out to be SENIOR (29A: [Most respected]). Despite the numerous entries in which I initially put in a wrong answer, I did make up for it a bit by getting MEET almost immediately, as my recent learning of the term “meet cute,” which is the initial meet-up of a couple in a movie that evolves into a romantic relationship later on in the film, coming in real handy (42D: [___ cute]). Have never camped in my life (city boy through and through), so RV HOOKUP, while very nice fill, is unfamiliar to me in real life (35D: [Campsite amenity]). Had absolutely no idea about APR being the month where one of my favorite foods is celebrated, and now I eagerly await April 2020’s arrival (16A: [National Burrito Day mo.])! Can’t tell you how many times I’ve heard the song mentioned in the clue for GOTYE, but, until today, I would have been completely lost if you asked me who performed it and I probably would have guessed that it was Sting (14A: [“Somebody That I Used To Know” one-hit wonder]).  Love the entry of I’M GONE, something that I’ll be thinking at the end of completing this sentence and having to leave for an assignment later on tonight (45D: [“We will deal with this in the a.m.”]). But first…

“Sports will make you smarter” moment of the day: ZAGS (52A: [Goes this way or that way]) – Twenty years ago saw the birth of a college basketball power…as well as the popularization of a non-official nickname of said college basketball power. In March of 1999, the Gonzaga University men’s basketball team, nicknamed the Bulldogs, made a Cinderella run to the Elite Eight, defeating Minnesota, Stanford and Florida in the NCAA Tournament as a No. 10 seed before losing to eventual national champion Connecticut. Very few people outside of Spokane, Wash., where the school is located, knew much about them, but many took to calling the team “The Zags” because of the funky-sounding school name. (The school is named after a Jesuit saint, Aloysius de Gonzaga.) The nickname “Zags” has become so popular that the term has been emblazoned on their alternate basketball uniforms for a number of years. Below is a picture of that uniform, worn during the 2017 national championship game between Gonzaga and North Carolina in Glendale, Ariz. How do I know that this actually occurred? As the saying goes, because I was there! 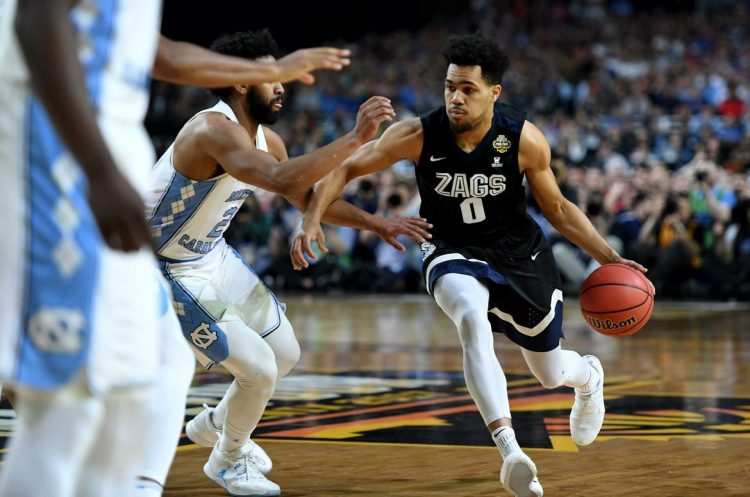 Thank you so much for your time, my lovely crossword savants! With next week being Thanksgiving Day, I will have to put my chances on being here next week at 50/50. Tune in during the same bat time and the same bat channel to see what happens next! 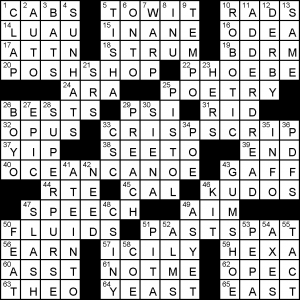 Today’s puzzle features a fairly broad theme that takes unusual pains to disguise itself. Six answers consist of anagrammed pairs clued as made-up phrases. In defiance of long-standing convention, these are not signposted by “?” at the end of the clues. This decision made the theme much more difficult to tease out. The first theme entry I completed was POSHSHOP, and I thought it may just be intended as a real entry, albeit a rather arbitrary one. The rest of the entries cleared that up, though slowly: CRISPSCRIP (is SCRIP “old money” though?), OCEANCANOE, PASTSPAT, ADDERDREAD and SUPERPURSE complete the set.

The theme ties up a lot of the puzzle’s working area, so most of the rest of the puzzle is shorter entries. At least today, it felt that more care was taken here and the grid is better balanced in terms of obscure, awkward entries. CSC is by far the weirdest; I normally encounter this as COSEC, and you’d be forgiven for putting SEC there.

TISHA Campbell-Martin is a new name for me. She plays the wife of the title character in Dr. Ken, which I also haven’t heard of, though I’m far from up to date with recent US television. It stars Ken Jeong, a qualified doctor who gave up medicine to became an actor, and it does sound worth checking out.