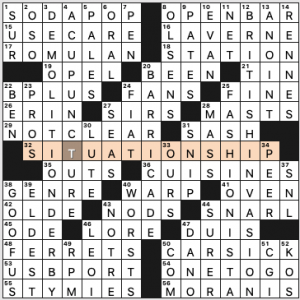 That’s two Friday NYTs in a row constructed by women, and this one’s got a cool-looking grid. Neighboring 15/11 pairs crossing a 13-letter crossbeam which in turn crosses a 9, plus stacked 7s in every corner.

My favorite fill: SODA POP (but not “pop-ups” in a clue for OUTS, plus for me, [What most pop-ups are] is about online ads or pop-up books or pop-up restaurants and not godforsaken baseball), ROMULAN, FERRETS with an etymology clue ([Animals whose name is derived from the Latin for “little thief”], ha!), CARSICK (ugh, I have a road trip coming up), STYMIES (I love that word), Rick MORANIS, GOOFUS (please be a Gallant, my friends), DEMOLITION DERBY (fun clue, [Smashing good time]), ACUPUNCTURE (got that one off just the A, [Some needlework]), FASHIONISTA, and the BRITISH INVASION (which I was just looking up for work purposes today—do you consider the Who to be part of the British Invasion, or did they come after it?—and yes, my job is fun).

Utterly new to me: 32a. [Romantic gray area], SITUATIONSHIP. Apparently you’re in a situationship when it’s not quite a relationship, doesn’t have that expectation of seeing each other every weekend, is maybe just a notch beyond a booty call scenario.

Kristina’s debut is fun! The theme answers are all locational idioms with literal-minded clues. 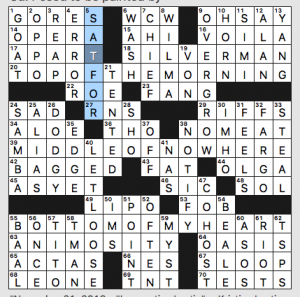 Three solid 15-letter phrases placed appropriately in the grid. Well done! I look forward to more of Kristina’s puzzles in the future.

What I didn’t know before I did this puzzle: that there is a city in Sierra LEONE named Freetown.

I didn’t understand the theme until after I’d finished the puzzle. I knew it was a letter or sound substitution but couldn’t figure out which one. Turns out it’s sounds: W for Q. 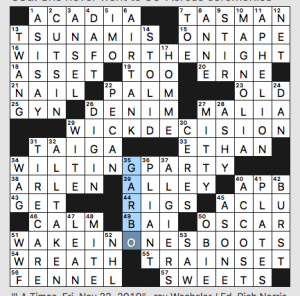 Three out of four is spectacular if you’re a baseball player. It’s not so great if you’re a theme writer.

What I didn’t know before I did this puzzle: that absinthe is flavored with FENNEL.

This is going to be a fairly quick write-up, because, as Gorski’s puzzle so kindly reminded me, I have a deadline on a manuscript that was returned for revisions that I need to resubmit or I will surely die. Because, you know, PUBLISH OR PERISH. (Sidenote: I’ve always found it kind of funny that the process of publishing crossword puzzles is so similar to academic publishing: you work hard on a thing you care a lot about, send it off into the ether, and 2-4 months later get a rejection from Will Shortz…er…I mean… some editor, who may or may not provide useful feedback. And then even if it does get published, people on the internet might say mean things about your work! It’s a hard life). 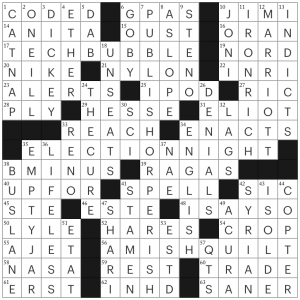 Anyways. I liked this puzzle! It’s a solid, clean themeless, just as you’d expect, with some fun trivia scattered throughout. Most of the entries weren’t all that exciting (IRON RICH, MARRIOTT, LIFELESS), but the construction and fill are both much better than a B-MINUS (which pairs nicely with the B-PLUS from the other Friday themeless we review on this site!).

I don’t know if this is a coincidence, or the Baader-Meinhof phenomenon, or just the cumulative effect of nothing-but-politics on everyone’s brain (including the constructor’s), but I sure did notice INDICTS and ELECTION NIGHT in the grid together and it gave me mid-solve agita.

Overall, I enjoyed the solve.  Several stars from me!

THEME: Baseball theme today – we have a PITCHER and all the bases in the grid 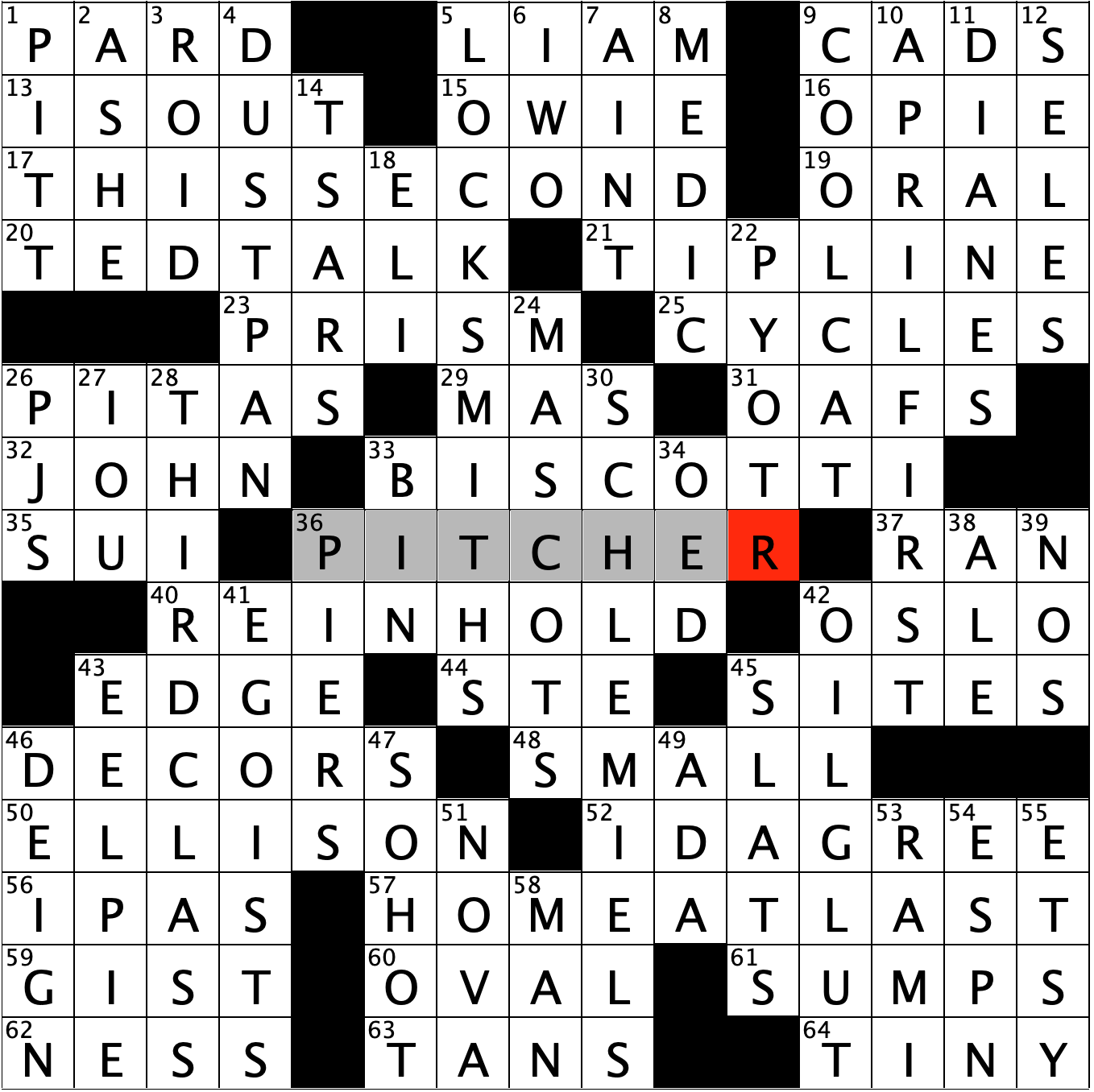 I appreciate the thought that went into this puzzle – the grid art baseball diamond and the placement of each base with the PITCHER in the center is beautifully done. That said, I would be happy to go the rest of my life and never see another baseball-themed puzzle. I understand I’m likely in the minority here, but really it just feels like we get so so so many puzzles about baseball and I almost immediately lose interest in them.

As I mentioned above, the most impressive thing about this theme is the placement of FIRST, SECOND, THIRD, and HOME all located around the parts of the diamond where they would be on a field. Had it not been for that I would’ve absolutely hated the whole thing.

Got a kick out of the clue for LOCKSMITHS [Key figures?] and there was plenty of fun fill here, TED TALK, TIP LINE, SCHLEMIELS and COOL CAT were the standouts for me – just wish we could put a moratorium on baseball themes. 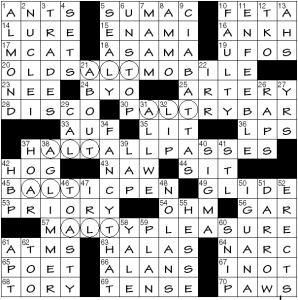 Mixed bag among the themers. Ballast fill is solid.

Got to go now.