A perfectly apt title indicates that we have to squeeze the names of plays and musicals into single squares in the theme answers. 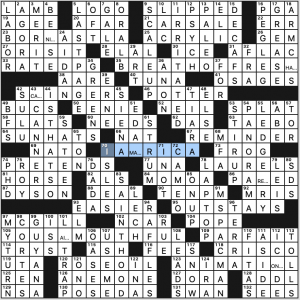 On the whole, I had a challenging time with these, but mostly because of my own failings. I admire this theme and grid greatly.

Plenty to like in the fill: MS. PACMAN, “IS THAT SO?”, PANORAMA, PARFAIT, SUNHATS, “MY TURN,” “OR IS IT?,” and RAFFLES. I also liked seeing Hawaiian actor Jason MOMOA in the grid, and with grid-friendly letters like that, expect to see more of him.

With all that challenging theme material—in both directions—there’s bound to be some staleness in the fill. This shows up in the likes of AGEE, AARE (crossing ERNE, no less), OSAGES, NCAR, UTA, ADDL, ANON, BFS, TOR, ON UP, and SDS. I have much dislike for this last one which has zero currency these days.

So where does that leave us? A good theme (even better if you know all the musicals), some strong fill, but some detracting fill. Let’s go with 3.75 stars. 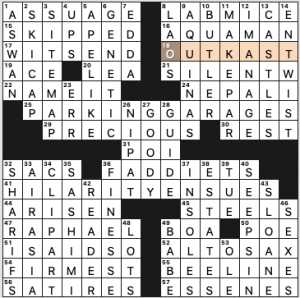 Here is why I wish Will Shortz and his team would try to keep entries from appearing in clues elsewhere in the puzzle. You get a weird entry like ENTWIST (which is a word that approximately nobody speaks or writes), and then a clue like [What happens after a zany plot twist] picks at the ENTWIST scab. And then you’re also annoyed that HILARITY ENSUES is the answer, because HIJINKS ENSUE is so much more fun (but, per Google, less often used).

This grid’s a 62-worder, packed with a zillion 7s plus a pair of 14s and a pair of 8s. Some of the 7s are zippy enough—AQUAMAN and AQUINAS (together again!), those poor LAB MICE, OUTKAST (though they’re a duo and not a group, and I will fight Merriam-Webster for saying a group only needs two members), FAD DIETS (not sure fruitarianism qualifies as such, and also that’s not a 7, I lied), and painter RAPHAEL. 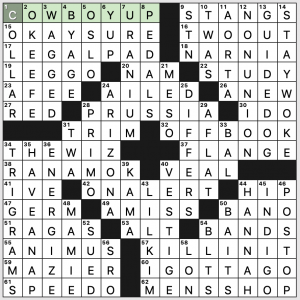 Interesting collaboration today! This is a common themeless grid type, primarily because it doesn’t have longer words in it. I don’t think there is nothing longer than 8-letters in here. But this one is chock full of fun entries and great clues. This was an absolute joy to solve! My time was over 11 minutes, but that doesn’t mean it was difficult. That just means I was multitasking while solving! A solid 4.4 stars from me.

Some of the fun stuff:

That is all! My next LAT post is on Tuesday. See you then. 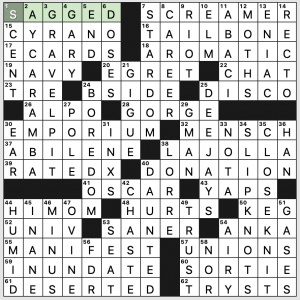 Brad has kind of a double today; he has half the byline of the LAT puzzle today as well! I found this puzzle not nearly as hard as a typical Wilber Stumper … until I got to the lower left corner! Most of the 20 minutes I spent on this puzzle was on this quadrant. I don’t know why I had so much trouble; in retrospect nothing looks too thorny! It is crazy sometimes how the mind works. Great puzzle by Brad, as usual! 4.5 stars.